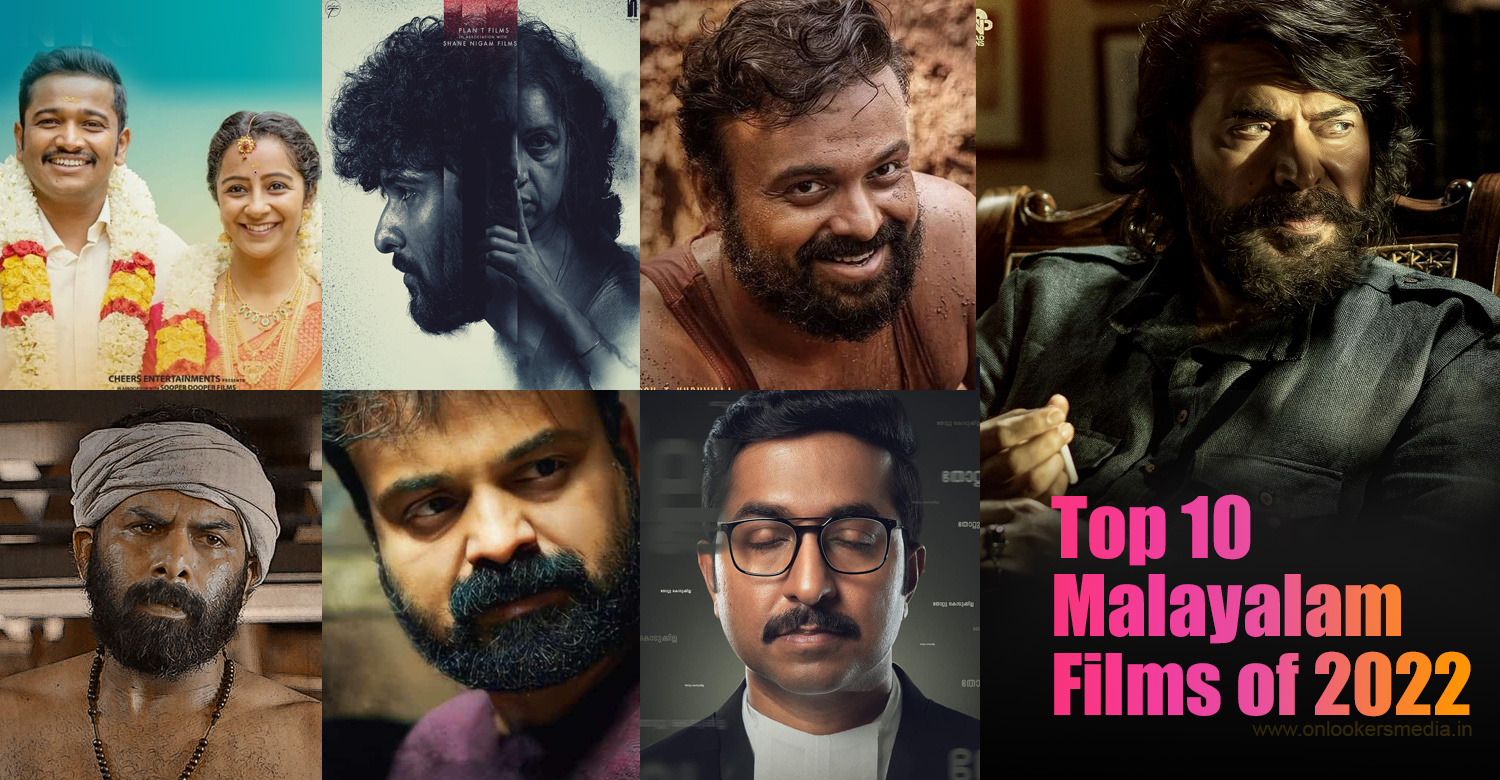 2022 has been an interesting year for Malayalam cinema. It began with the industry bouncing back from the pandemic and delivering some quality films, some of which went on to be raved nationally. Just like how it was in the last few years, Malayalam cinema continued to grab eyeballs for its content with a delectable mix of thrillers, satires, social dramas, relationship dramas, horror films, and black comedies.

Here we take a look at our top 10 films of the year.

(In the order of release date)

Malayalam cinema has always had a dearth in quality horror films. Save for an occasional ‘Bhargavi Nilayam’ or an ‘Aakasha Ganga’, there hasn’t been worthy many films in this genre as compared to its neighbouring industries. It is at this point that Rahul Sadasivan’s ‘Bhoothakalam’ comes in as a breath of fresh air. Though it starts off like a psychological thriller, the film takes an eerie turn to suddenly become a chilling horror film. Despite being made with minimal resources, it’s on par with international standards in terms of the themes explored and how effectively it’s conveyed. Revathy and Shane Nigam played the lead roles in the film, with the former winning a Kerala State Award for her performance in it.

Mammootty and director Amal Neerad were supposed to reunite for the much-hyped Big B sequel, Bilal. But that’s when the pandemic struck and changed everything. Putting the biggie on hold, the duo planned something that could be shot mostly in a closed environment. It eventually became ‘Bheeshma Parvam’, the biggest box office hit in Malayalam cinema this year. The film is heavily inspired by Francis Ford Coppola’s all-time classic ‘The Godfather’ and the Indian epic ‘Mahabharatha’. Mammootty as the aging patriarch of a powerful Cochin Christian family delivered a remarkable performance. Along with him, the cast included a host of youngsters and it was a delight to see the veteran gracefully let them take centre stage. Hitting screens in March, the film opened to extraordinary response. In a sense, it revived the grappling theatre business in Kerala.

Director Kamal KM’s ‘Pada’ is a political thriller headlined by a stellar cast — Kunchacko Boban, Joju George, Vinayakan, and Dileesh Pothan. The film is based on a true incident that occurred in 1996 when the then Palakkad collector was held hostage by some activists working for the welfare of tribals. It was a well made, hard-hitting film that documented an important phase in Kerala’s political history. ‘Pada’ was a powerful political statement that showed the miserable plight of the Adivasi community through the exchanges between the collector and the five men, who hold him hostage. Upon its theatrical release, the film was well received by both the critics and the common audience. It also a found a lot of appreciation after its digital release on Prime Video.

Ratheesh Balakrishnan Poduval, who impressed with his directorial debut ‘Android Kunjappan Ver 5.25’, attempted a social satire with ‘Nna Thaan Case Kodu’. And the end result was a hilarious entertainer set in the Kasargod region. Kunchacko Boban played the role of a petty thief named Kozhummal Rajeevan. The story revolves around his fight for justice when an innocent act to defend himself places him in loggerheads with political bigwigs. Along with Kunchacko, it had a terrific ensemble, in which most of them were newcomers. The film got lapped up by the audience irrespective of their age groups and emerged as one of the highest grossers of the year.

Of late, we’ve been seeing a lot of films that claim to be new-age entertainers, but nothing came close to ‘Thallumaala’. The Khalid Rahman directorial is an unique experiment, but one that’s supremely entertaining. With a lot of freshness in its narrative, treatment and portrayal of the Malabar region, the film found widespread acceptance. It particularly resonated with the youth – the film’s target audience. The film also helped in further cementing Tovino’s stardom; it was evident from the exhilarating responses in theatres. ‘Thallumaala’ arguably has the best soundtrack of the year, and also boasts of some stunning action set pieces — a kind that’s not usually seen in Malayalam. Now you now know why ‘Vikram’ director Lokesh Kanagaraj, rated it as his most favorite film of the year!

After the arrival of OTTs, people are now exposed to quality content from across the globe. Thriller is the most sought-after genre, and there have been a quite a few of them in Malayalam cinema this year. Nisam Basheer’s sophomore film is a novel attempt, that’s both a supernatural and psychological thriller. Mammootty’s terrific performance as Luke, the man on a spooky mission, is among the finest in his recent times. It’s not always that we a superstar of his stature take up a role as complex and grey as Luke. Apart from starring in it, Mammootty also produced the daring experiment. The megastar deserves huge respect for his unending passion to shoulder such projects time and again. The film has several other takeaways including its brillaint technical side and the performances of actors like Bindu Panicker, Asif Ali and Grace Antony.

Lately, Indian cinema has seen a surge in a film that discuss about patriarchy and toxic households. ‘The Great Indian Kitchen’, ‘Thappad’, ‘Darlings’, and ‘Ammu’ are some of them. ‘Jaya Jaya Jaya Jaya Hey’ (JJJJH) would have been just another entrant to the list if not for its treatment. The Vipin Das directorial is a ‘domestic-action’ film that’s incredibly fun and entertaining. It’s commendable how the makers managed to pull off such a hilarious film despite the seriousness of the subject. Families flocked theatres in large numbers to watch the film as most of them found it relatable. Some even found it cathartic. The performances of the two leads – Darshana Rajendran and Basil Joseph – is one of the biggest strengths of the film, and its no wonder that immense adulation is pouring in for them and the film after its OTT release.

Maju KB’s ‘Appan’ is a disturbing dysfunctional family drama that boasts of the year’s best performances. It’s a heartbreaking tale of a family’s suffering because of its spiteful patriarch. Alencier Ley’s Ittychan is among the most unapologetic portrayals of a despicable father in Malayalam cinema. Sunny Wayne, who plays Njoonju, his emotionally-disturbed son, delivers what’s arguably his career best performance. Ananya, Pauly Valsan, debutante Radhika and Grace Antony are also brilliant in making it a lively film despite the fact that it mostly follows the mundaneness of daily life. It’s also a great example for how minimal-but-effective writing can elevate a film. Almost the entire film is set within the house and the rubber estate behind it. But it hardly feels monotonous. Thankfully, the film had a direct digital release and found the right audience.

This Vineeth Sreenivasan-starrer is the true surprise package of the year. It’s a terrific character study of a sociopath peppered with loads of black comedy and thrills. Debutant director Abhinav Sunder Nayak broke several conventional rules of a commercial Malayalam cinema to deliver a quirky, original film. It’s the unabashed portrayal of a sinister that got the most attention. Unlike in other films, where there’s a coming-of-age angle, ‘MUA’ has no such redemption part. It’s a brave attempt that worked with a large section of the audience. Some of Abhinav’s smart choices like incorporating the quirky dubs and inventive edit patterns all paid off wonderfully to lend a lot of freshness to the film. The makers have announced a sequel and we already can’t wait.

2022 is Kunchacko Boban’s 25th year in cinema and it has indeed been a special year for him. ‘Ariyippu’, which he also co-produced under his newly launched banner, took him to international stages like the Locarno International Film Festival, Busan film fest, and the London. BFI. The film, which saw him reuniting with director Mahesh Narayanan after ‘Take Off’, is a gripping drama centered around a migrant Malayali couple working in North India. Shouldered by Kunchacko Boban and Divyaprabha’s wonderful performances, the film garnered unanimous appreciation.