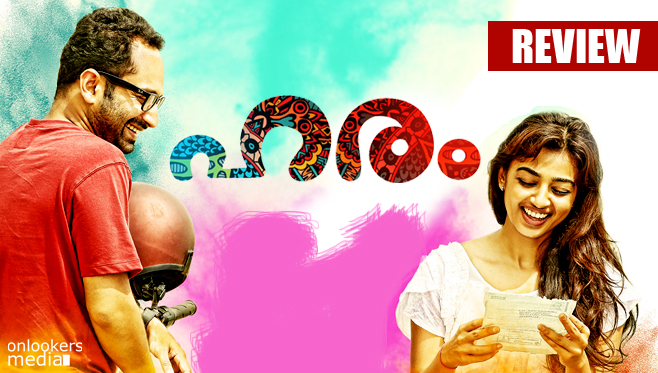 Haram, was the 2105 mollywood film starring Young actor Fahadh Faasil and North Indian actress Radhika Apte in the lead roles and the film was was directed and also written by a debutant named Vinod Sukumaran. Vinod Sukumaran  is the editor of the film as well . In one sentence the film disappoints the common audience and may have satisfied certain critics who thinks a film should have always something to think seriously for.

The film follows a very realistic narration and intended to show us the way of life in the modern day society. But it is told in such a way that the spectators will find it very difficult to cop up with the lagging pace of the film and ultimately bored to sleep in the theater. They wanted the film to work as a mirror which shows us the decreasing importance of human relations in this fast world where there is no time for men and women to sit for a moment and think about what is happening in their lives.

The story is told in a style in which past and present are mixed and it revolves around the life of Balu played by Fahadh Faasil and Radhika Apte’s character Isha. Both of them were working at a call center and at there they met and become friends first and later that paved way for a love affair leading to their marriage. And Isha had failed love affair before she fell in love with Balu and Balu knows it too. But later problems began to rise up between them and both Isha and Balu were not at all ready to shed their egos to solve the problems. They feel that they took a hasty decision and that was the reason for their problems. Soon they got ready for a divorce even though both loved each other but the ego prevented if from coming out. Balu tried his best to come out of it and make peace with her but Isha was not at all in a mood to compromise.

Vinod Sukumaran had seems to have done a lot of study about human relations to weave this story and he told it in its most serious sense but on the way of getting serious it had lost its pace and made the audience perplexed at many stages and sometimes a common man can’t even understand what was going on the screen. The film does not entertains the audience at all and even if the film has something in it as we call as class elements it does not reach to the audience because of the too much complexity it has in its crux and the seriously dead pace with which it had told.