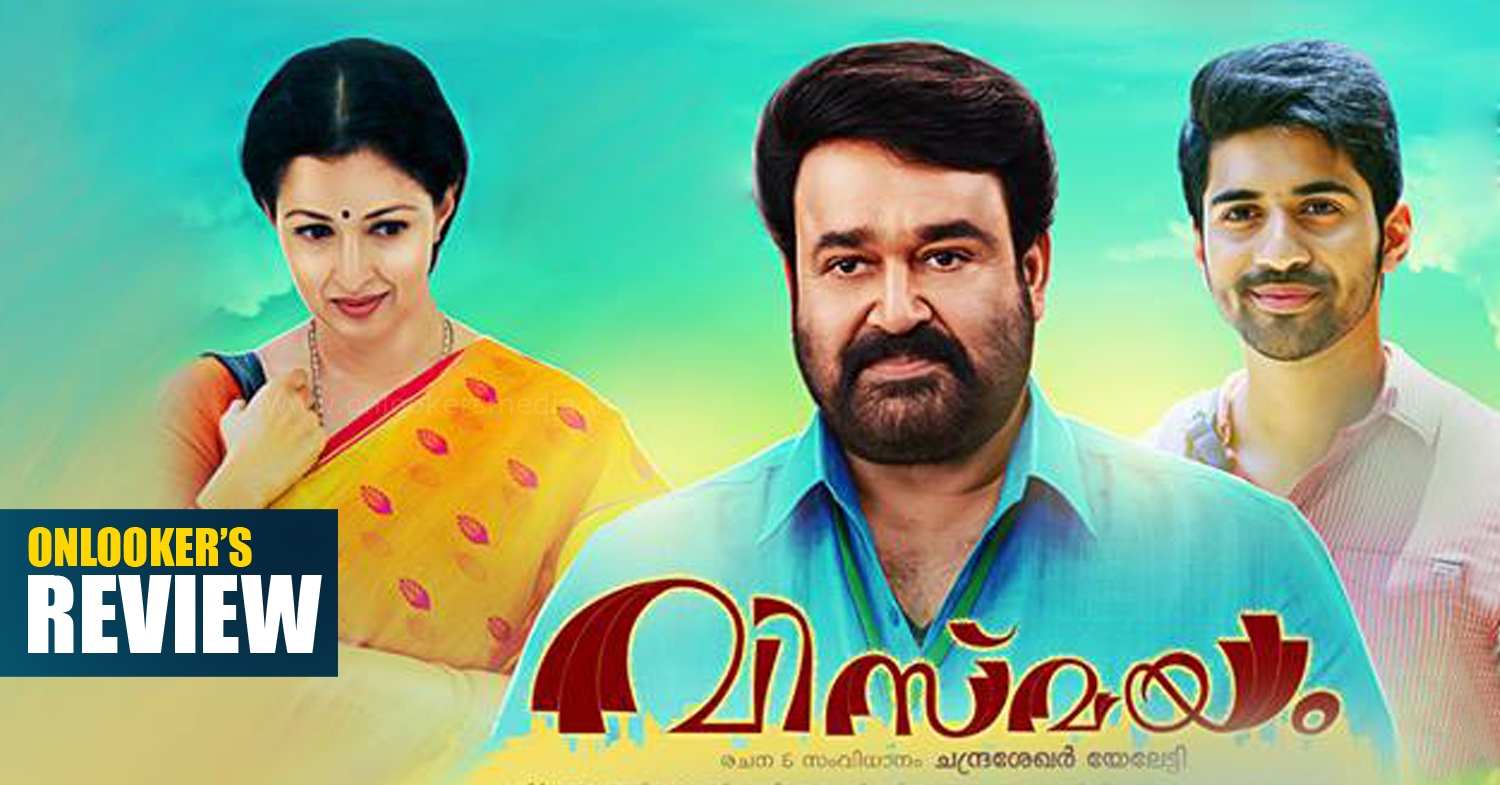 Vismayam is the latest release here in Mollywood which is the Malayalam version of a Telugu film named Manamantha starring Mollywood Super Star Mohanlal and Gauthami. National award winning director named Chandra Sekhar Yeleti had scripted and directed this movie which has a Tamil version as well named Namdhu. This flick has been produced by Sai Korapatti under the popular banner in Tollywood named Varaahi Chalana Chithra. Vismayam had become one of the eagerly awaited movie here, as it is after 9 months that a Mohanlal movie is releasing here. The trailer, teaser and songs of the movie also got great response from the viewers and that also made people to wait for this movie.

The plot of this movie revolves around 4 characters played by Mohanlal, Gauthami, Raina Rao and Viswant. Mohanlal plays an assistant manager in a super market and his character name is Sairam. Gauthami plays a house wife named Gayathri, Raina Rao plays a school girl named Mahita and Viswant plays a college student named Abhiram. The plot moves through the lives of these four characters. Sairam wants to be the manager of the super market in which he is working as he is going through financial problems. Gayatri wants a stable and respectful life. Mahita is a school girl who always wants to help others and she helps a boy from the streets to be enrolled in school. Abhiram is a college student who has certain goals in life, but he falls in love with a girl which changes his life.

Chandra Sekhar Yeleti is always known for his quality films and the different striking themes he presents through his movies. Once again he becomes successful in giving us a movie that has great quality in its content and at the same time entertains us as well. The screenplay by him was fresh and fabulous and the way he narrated the plot telling 4 different stories that represents different stages of life was just superb. They way conceived the emotional scenes and used the artists was also fantastic and he really become successful in touching the heart of the audience with the dialogues. The manner in which he connected the four different stories at the end was quite masterful. The scripting of this movie was just terrific to say the least. The climax portion was fantabulous and how he he narrated the story to reach the unexpected climax was really awesome.

Gauthami as Gayathri also given a really matured and controlled performance and she was perfectly fit into the character of the housewife. Viswant and Raina Rao also did a very good job in the movie and along with them, artists like Urvashi, P Balachandran, Joy Mathew, Anisha Ambrose, Nassar etc also done a great job in the movie.
Rahul Srivastav had set some realistic and pleasant frames for the movie and Mahesh Shankar’s music contributed really well to take the plot forward in smooth pace. G V Chandra Shekhar had provided neat and smooth cuts for the film.

Vismayam is a quality entertainer which has life in it. You all can identify the characters and connect with them as well. Only a few films can make you feel what is happening in it in your heart and Vismayam is such a film. It will be a rollercoaster ride of emotions which tells our own story and without any doubt, we can say that Vismayam is one of the best movies released here in this year. Don’t Miss it, it’s just mesmerizing.