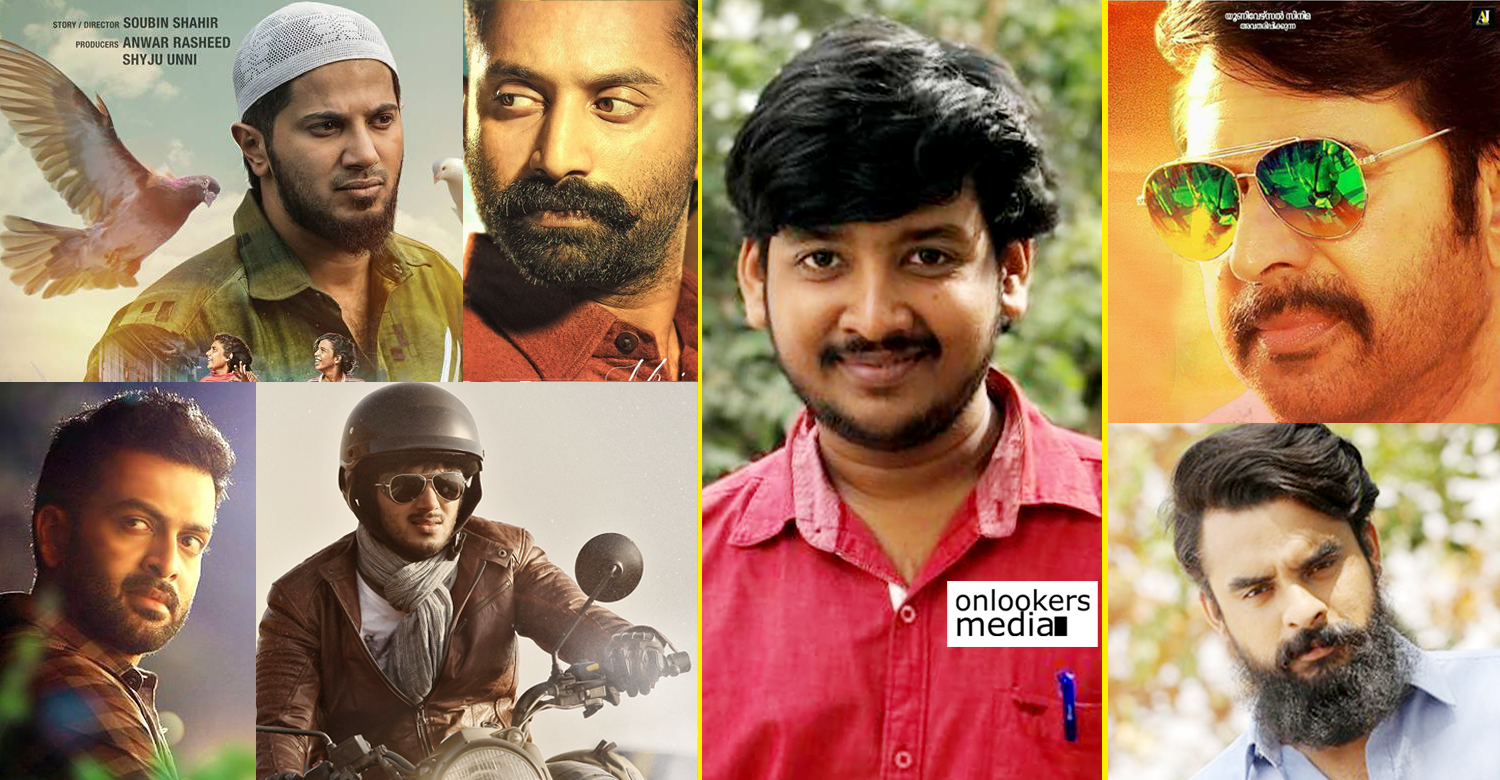 Malayalam cinema, unarguably, is going through a spectacular phase. The growth of an industry is upwards only when fresh talents emerge and they find acceptance among the audience. Passionate youngsters are knocking the doors of the industry every single day and the Malayali audience are gleefully welcoming them. We caught up with one such youngster, who is making waves with his words. Lyric writing is not as easy as it looks like. While filmmakers have the liberty to visually present a movie in a duration of 120 or more minutes, lyricists have to deliver the goods in a matter of just 5 minutes. It is their rhyming-yet-meaningful words that enhance the mood of a particular situation.

Malayalam cinema is lucky to have had the service of legends like Kaithapram Damodaran Namboothiri, ONV Kurup, Gireesh Puthenchery, Rafeeq Ahmed and many others. It is an arena that has been ruled by seniors but today we have Vinayak Sasikumar, a 23-year-old youngster whose songs are continuously making it to top of the charts.

‘Thazhvaram’ in Neelakasham Pachakadal Chuvanna Bhoomi, ‘Thaniye’ in Guppy and ‘Oh Rabba’ in Godha shows the versatility of this youngster. More recently, the song ‘Pranavakaram’ from the movie ‘E’ has won him lot of appreciation. We recently had a casual chat with Vinayak where we discussed about music, his early days, aspirations and much more.

Lyric writing is not everyone’s cup of tea. It is not something most cine aspirants would cho naturally. How did you land as a lyricist and are you formally trained in music?

First of all I didn’t choose lyric writing. It just happened that way. And yeah, I’m trained in music. From my childhood itself I’ve been attending music classes and I learned to play keyboard till my 12th standard. During that time I wanted to be a composer and that’s when I started writing lyrics. I used to write lyrics for my own compositions and gradually I started to concentrate more on my writings.

There’s this eternal doubt regarding how this process of developing a tune into a song happen? Are the tunes composed first and lyrics written accordingly or is it the other way around?

95% of the time it’s tune first. Even legends like Vidhyasagar, who have been in this arena for over twenty years compose the tunes first. I have written lyrics for over 25 songs and all of them were written according to the rhythm and mood of the already composed tunes.

As a lyricist, do you think writing the lyrics first is a bit more comfortable as you can experiment and feel a lot easier?

Easier, no! but definitely more freedom as there are no constarints. When we write lyrics in order to suit the tune, there is a certain meter that has to be maintained. Whereas, in the other way it is like writing a poem; we have no such limitations.

Cinema is evolving and the concept of music is also changing. The format of five must-have songs is a thing of the past now (atleast in Malayalam). While writing lyrics, do you get to read the script beforehand or do they just let you know the situation?

It depends, sometimes I get to read the script even before the commencement of shoot. There are also occassions where scenes are shown and I’ve to pen lyrics accordingly, which actually has an added advantage as I’ll be knowing the mood of the song. Songs in movies like Parava and Neelakasham Pachakadal Chuvanna Bhoomi were written that way.

You are comparatively lot younger than your peers. How welcoming is our industry to youngsters?

I’m someone who entered the industry without any backing or help from industry insiders. Just like other aspirants who wish to become actors and filmmakers, I kept looking for chances and that’s how my first film happened. I was 18 years old when I wrote lyrics for Kuttiyum Kolum, my first film. That’s a very young age for a lyricist and in that sense our industry has been welcoming fresh talents.

What would be some of the biggest compliments that you’ve received for your work?

My friends and family have always been supportive. I believe that my aim should be to fulfill the director and composer’s needs. Because they are ones who belived in me and it is my duty to pay them back. I’ve got the best of compliments from all those whom I’ve worked with. Besides that, the biggest compliments will be the ones I got from my seniors. I’m a huge fan of Vidyasagar sir and fortunately got a chance to work with him. He composed tunes and asked me to write lyrics accordingly. It was like a workshop and that was a great learning experience for an youngster like me. He introduced me to Sathyan Anthikad sir and spoke high of me. To get that sort of appreciation from a musician of such big stature is truly a blessing. Similarly, M Jayachandran sir, with whom I recently worked in Pullikkaran Staraa, has also encouraged me a lot. These are moments that I would always cherish. Do you have any regrets?

Regrets, no.. but yes, I’ve had some missing. I was working in Chennai till last month, so I’ve missed the physical involvement of a lyricist that is required when a song is shaping up. It is a great experience to see the process of how a song develops. While writing in the presence of the director and composer, corrections can be made immediately. Also the instant response that can be seen from their facial expressions gives a big satisfaction. I missed all that while I was away in Chennai. Mostly, I used to write the lyrics and send it through mail or Whatsapp. Also I’ve not been able to attend functions like audio launch or success celebrations due to my busy work life. Now I’ve resigned my job and moved to Kochi. Earlier, I was very passive as a lyricist doing just 2-3 films in a year, now I’m planning to be more active and concentrate entirely on lyric writing.

What is your take on doing cover versions for old songs?

As a lyricist, I don’t have any objections but as a listener I’m not a big fan. I acknowledge the fact that doing cover versions is a very creative work. The legendary MT Vasudevan sir has given his perspectives to Vadakkan Pattukal and Mahabharatha. Likewise, these singers and musicians are giving their perspectives. If they succeed in doing so, then well and good but once the essence of the original is missed, it looks very odd. Most of the cover versions that are releasing these days have failed to retain the original magic and end up as a mess. Finally, what are your future projects?

Mammootty’s Pullikkaran Staraa was the last to come out. Next on the line is Parava. I’ve written all the songs in the movie and it was such a wonderful experience. I’m also working on Anwar Rasheed’s Trance.

We, at Onlookers Media wish all success for Vinayak in his future endeavours. Looking forward to more from this amazingly talented youngster

A chit chat session with Angamaly Diaries director Lijo Jose Pellissery
“Tharangam is a fun entertainer with a tinge of fantasy”: A casual chat with director Dominic Arun
To Top