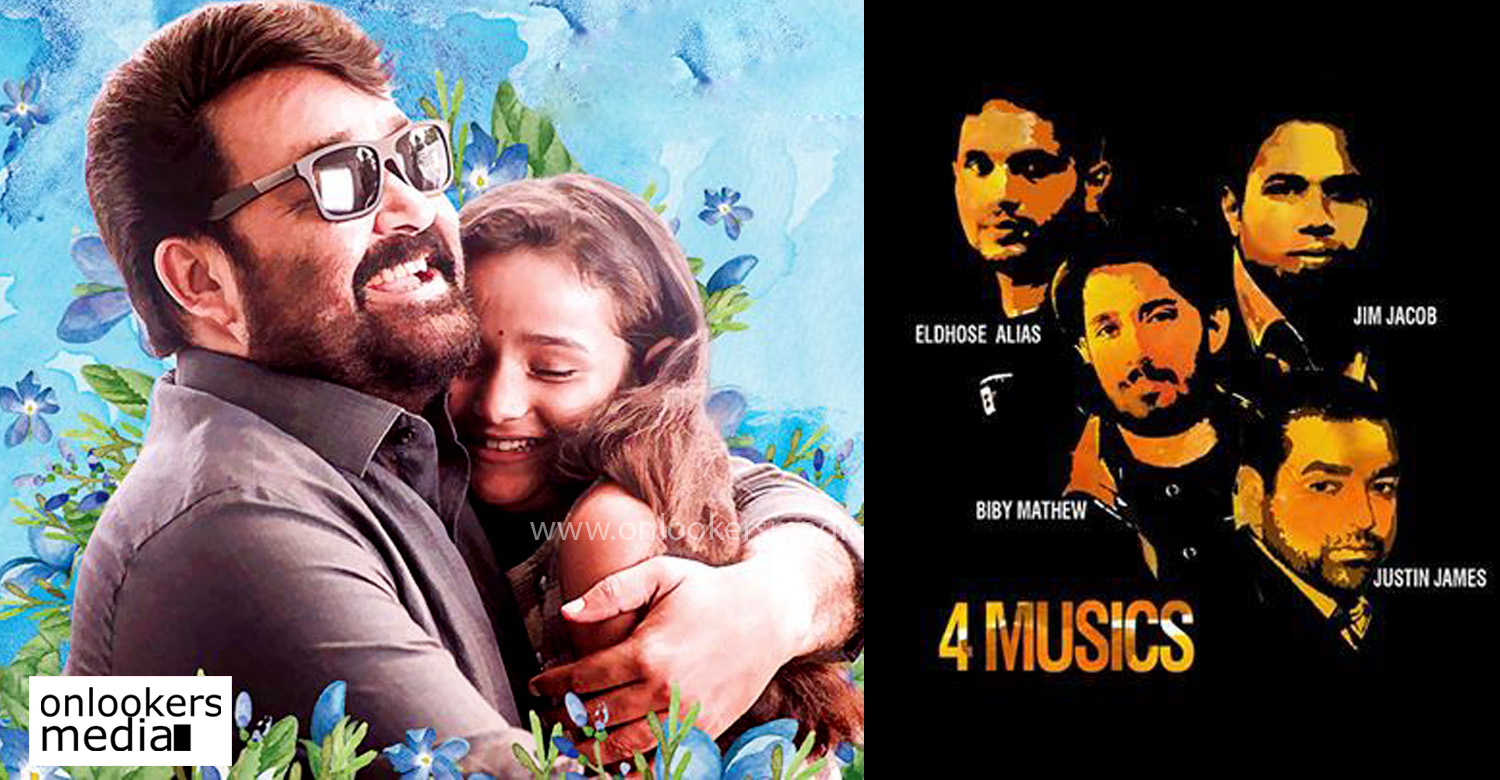 The songs from the movie Oppam is the talk of the town now. The songs composed by a team called 4 Musics has just given us a stunning experience and it had already become the biggest hits of this year in Mollywood. Each of the songs made its own space in the heart of Malayalees and this team had in fact made grand entry to Mollywood as well. Jim, Bibi, Justin and Eldhose are the 4 magicians who had given us 4 wonderful songs through the Album Oppam.

When the visuals of the song Minungum Minnaminunge had come out, the reach of the song had went to another level and the song video now all set to cross 6 lakh views in YouTube as well. Mohanlal-Priyadarshan team once again giving us a film with beautiful songs and 4 Music is the one behind it. We Onlookers Media had got an opportunity to take an exclusive interview of Jim, who is one among the 4 members of the team 4 Musics.

Now, each and every Malayalees humming the songs from Oppam and it has been an incredible success. Is that expected ?

Not at all. We have the confidence that it will do well, but we never thought that it will reach to such a big level. The success got by Minungum Minnaminunge song was just amazing and the credit has to be given to Priyadarshan sir as well. Because he had selected this tune from a number of tunes we provided as a choice. His visuals for the song also made it to reach to another level.

We can say that Priyadarshan is one of the best in Indian Cinema when it comes to the music sense he has. He had always given great songs through his movies. So how your team got selected by him for this movie and how was the experience of working with him ?

It is because of producer Antony Perumbavoor that we got the chance to meet Priyan Sir. He said that he can only refer us to Priyan Sir and can’t recommend to him. So, we met him with the help of Antony Perumbavoor. Priyan sir had already told some others as well to tune the songs for this film. We were the last ones who went to meet him with this request. So he told us to compose some tunes and give it to him. If he likes it he will use it in his movie. We took it as a challenge and composed two songs with 3 options for those two tunes. We went to him with those tunes and he really loved them. It was the Punjabi song and a different version of Minungum Minnaminunge song.

Everybody is saying that the Songs in Oppam really staged a comeback of MG Seekumar as well. He had sung all the 4 songs in the album and how you landed on the idea of choosing him ?

Priyan Sir had told us to give two songs for MG Sreekumar in the first stage of composing itself. Because we all know that when Mohanlal Sir is on the screen performing in a song, the most suitable voice for him always comes from MG Sreekumar Sir. And we also wanted to work with him as we are hardcore fans of MG sir, from our childhood. But we never ever expected that one day we will get the chance to work with him. Still we have certain doubt about his voice as we didn’t heard many songs from him in recent past.

But, when he came to our studio and sang the songs, we were just stunned by the depth of his voice. He had done a splendid job. The third song Chirimukilum was composed as a tribute song for Mohanlal- Priyadarshan- SP Venkitesh team. We are hardcore fans of the music of SP Venkitesh Sir and we wanted to recreate that feel from the late 80’s and early 90’s through this song. When it comes to the singing of this song, MG Sreekumar was the only choice as his voice was the one which had given life to SP Venkitesh Sir’s music in movies like Kilukkam from Mohanlal- Priyadarshan team.

Out of the 4 songs, 3 of them are melodies and it gave us a feel of the evergreen songs we heard in 90’s. Did you deliberately follow that style ?

More than following that style, it was like creating what we really loved. We are hardcore followers of melody songs and specially, of the songs in 90’s. We want that era back in music as well. Priyan Sir also is a great fan of Melody songs and that also paved the way for the creation of these songs in Oppam.

The Chinnama song and Minungum Minnaminunge songs were done as per the suggestions given by him. He wanted a funny, energetic, folk kind of tune for Chinnamma song and for Minungum Minnaminunge song, he wanted a lovable simple music. We created those songs purely based on the situation explained to us by Priyan Sir. He had already told us that the Minungum song will be singing by a little girl and we had tuned it accordingly.

What about Mohanlal’s response about the songs ? Because these are the best songs that has been coming out from his movie in recent years !

He is very happy after hearing it and really appreciated us for this. He even shared in his Facebook page that after a long time he is hearing a song in repeat mode. That itself is an honour.

What about your next projects..?

In fact our first venture was a move named Just Married. Oppam is the second film. Even before the release of songs from Oppam, we had completed the composing of another movie which will be directed by Sajan Johny. But the official announcement of the movie will come later as they are waiting for the dates of the lead actors.

It has been a pleasure talking with you Jim and we wish you all the very best for all your future endeavours. Hope Team 4 Music will go a long way from here and we all are waiting for the release of Oppam. Thanks for sharing your valuable time with us.

Onam 2016 : Asianet and Surya TV to come up with big movies
Adam is not against Christianity, director Zamar
To Top