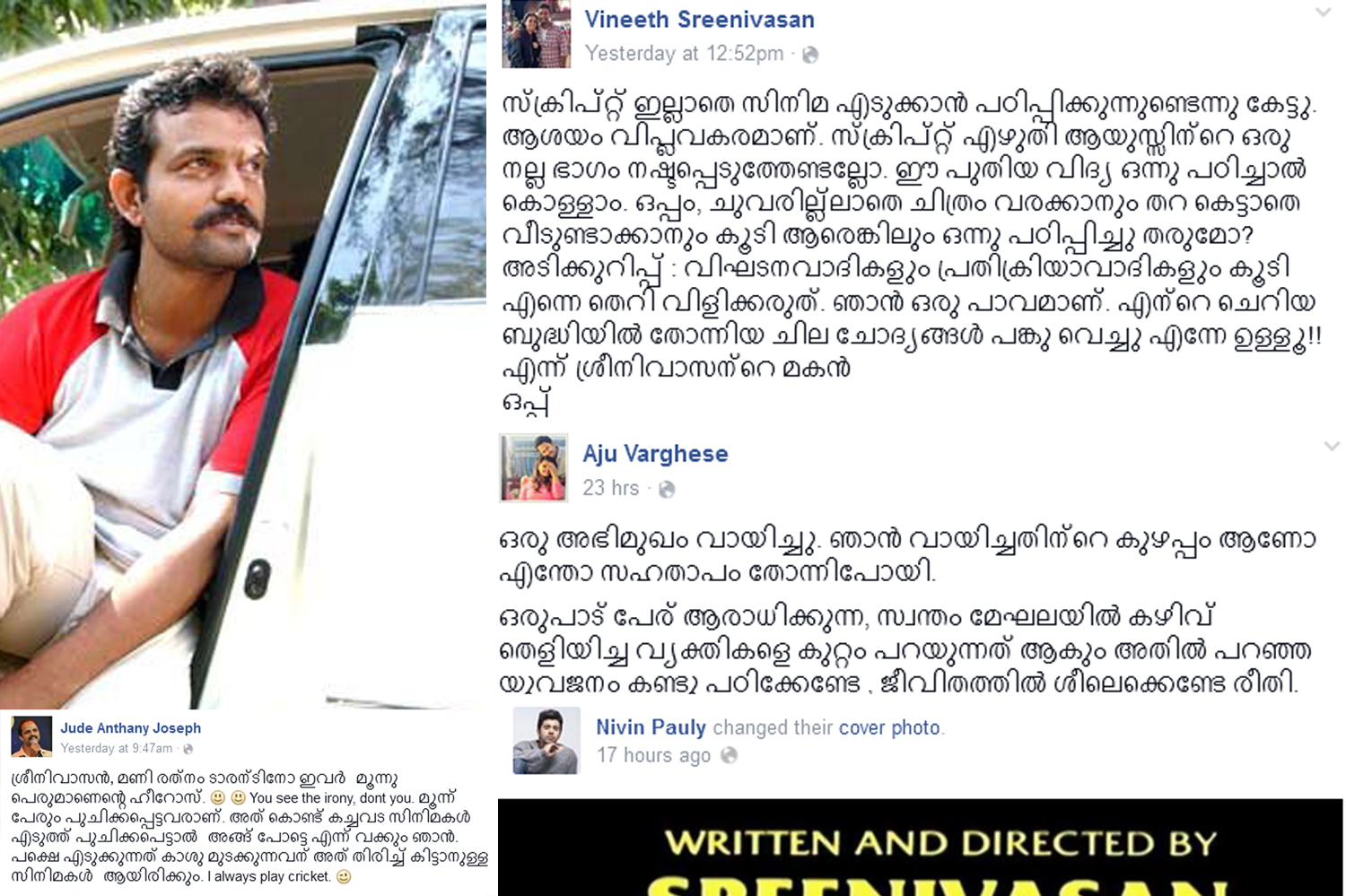 As we have reported earlier, Rajeev Ravi had made some negative comments about Sreenivasan, Mani Ratnam and Tarantino in an interview with South Live. His interview has not gone well with many people and they have wasted no time in retaliating through their Facebook posts.  Rajeev Ravi had remarked that the movie maker should set the script on fire before he starts making the movie.

Sreenivasan’s son Vineeth Srinivasan made a sarcastic observation on this comment on his Facebook page. He noted that he happened to hear that it is being taught how to make a movie without having proper script. He added that the idea is revolutionary since one would not have to spend a good proportion of one’s life writing script for the movie.  He continued to write that he would like to master this technique along with the technique of drawing pictures without walls and building houses with floors.

Many others including director Jude Anthany Joseph, Aju Varghese and Nivin Pauly have joined Vineeth Sreenivasan and have posted their thoughts  with regard to the situation on their Facebook page .Jude Anthany has also addressed the situation .  He openly stated that he looks upon Sreenivasan, Tarantino and Mani Ratnam as his idols. He wrote on his Facebook that he will not be much bothered even if  he is condemned for taking commercial movies. He said that his top priority is to ensure that financier of his movie retrieves the money he has spent on the movie.  He also posted a comment that Rajeev Ravi has filmed  numerous scenes for the movie Annayum  Rasoolum in different parts of Kochi without permission  and this makes him the real fraud.

Other film personalities have also displayed their support to Sreenivasan as well. Nivin Pauly has changed his cover photo and his new cover photo goes like this: written and directed by Sreenivasan. Aju Varghese has also given a mention to Ravi Ravi interview. He started his post post by saying that he has read an interview. He jotted down that he is not sure if he has misunderstood it and that he could not help but feel sympathy for the interviewee. He also asked if ridiculing people who have proven themselves in their profession is the right living style that the youngsters should adopt.

A new romantic pair in the M-town: Dulquer Salmaan and Isha Ranganath
The news against Rajeev Ravi is a framed one, says Geethu Mohandas
To Top