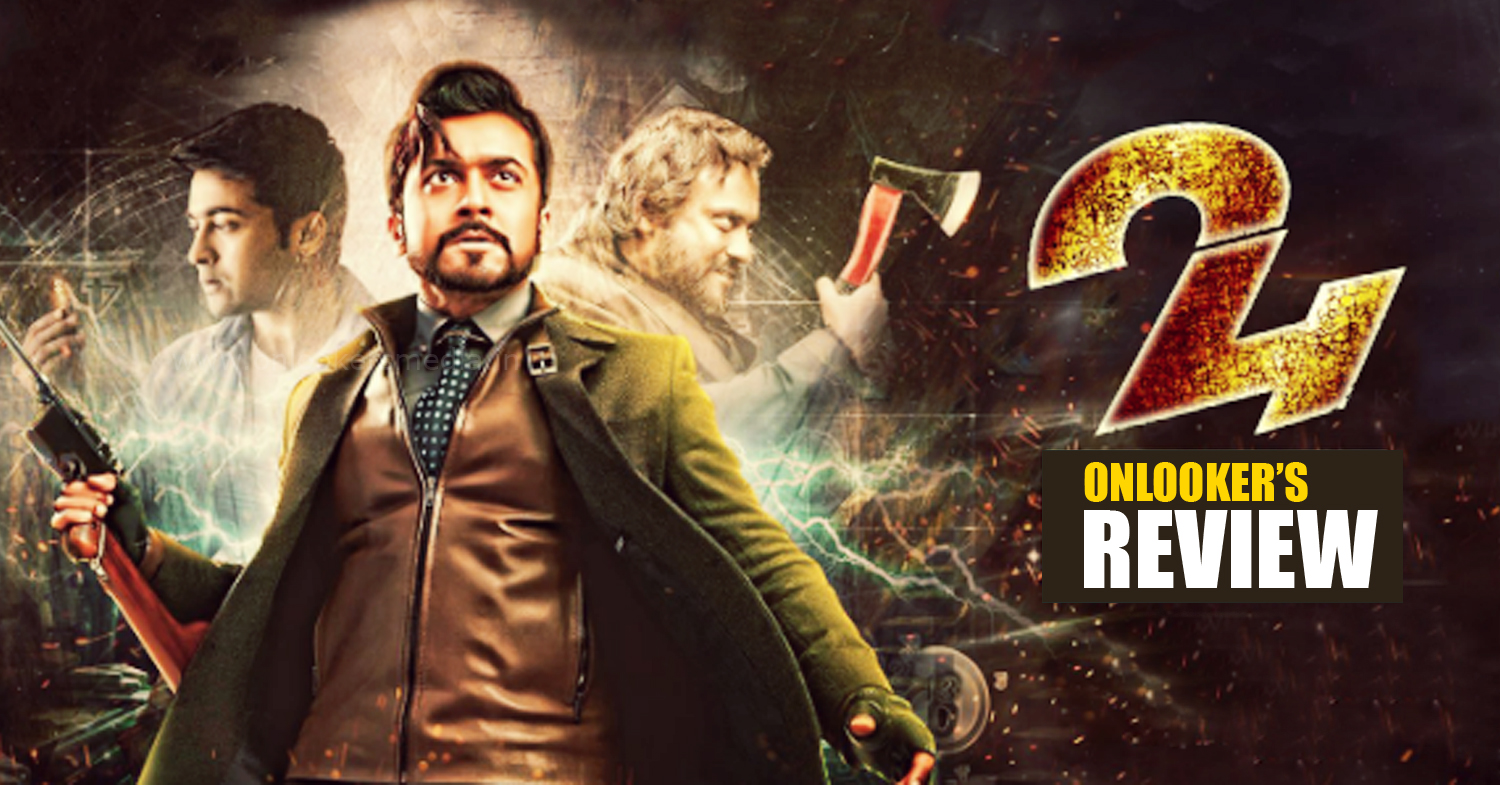 24, the big release from Kollywood had hit the screens all over the world today. The Suriya starrer is directed and written by Vikram Kumar and produced by Suriya himself. The film had created great hype before the release as it is a big budget science-fiction thriller. Suriya’s last few films were not raised up to the mark in box office and his last film Mass was indeed a disaster. So, the fans of Suriya and film lovers pinned their hopes on this one and the success of Vikarm Kumar’s previous film gave them great hopes on this one.

The plot of the film revolves around time travel. The film begins in 1990 as a scientist named Sethu Raman played by Suriya invents a watch which can be used for time travel. But his brother Athreya tries to snatch it from him and during which Sethu Raman and his wife Priya got killed. Athreya also got into an accident during that. But, the son of Sethu and Priya named Mani survives and the later part of the story is happening in 2016 after Mani become a young man. Later Mani happened find the watch with him and there starts the fight between Athreya and Mani. Suriya had played 3 characters in this film as he enacted Sethu Raman, Athreya and Mani. Priya’s character was played by Nithya Menon and Samantha plays the love interest of Mani and her character name is Sathyabhama.

Vikram Kumar had done a brilliant job as a director and screen writer and made one of the best science-fiction thrillers we ever saw in Indian Cinema. The screenplay was very tight and filled with unexpected twist and turns. It really makes the audience thrilled and viewers will not get bored even for a single minute. The emotional scenes between mother and Son also wonderfully visualized and the filming of the songs are also very good. The way in which he had connected minute details from the beginning to the end was fabulous.

Even though there is not much logic behind the time travel watch, he had made the audience to believe what he says with superb narration of the events with great intensity. The humor part in the film also worked out very well. The beginning was dramatic and it will make you get inside the story. Then comes a terrific interval punch and a rollercoaster ride of thrill follows.

The music by AR Rahman was fantastic and all the songs were superb. Specially, the background music was thrilling and captivating one. Thiru’s Cinematography elevated the technical perfection of the film and the crisp editing by Prawin Pudi never let the pace of the film down even though the film is 2 hours 44 minutes long.

Suriya’s performance is the highlight of the film as he had given a stunning performance playing 3 characters. But the Villain character named Athreya was the best one. The sound modulation and expressions were terrific and he had not only made a comeback as a star but as an actor as well. Samantha, Nithya Menon, Saranya etc also played their part to perfection.

On the whole, 24 is one of the best science fiction films that came from Kollywood and Suriya had made a great comeback after a series of flops. This is a complete entertainer mainly for the fans of Suriya and will be loved by children as well. If you love to see a visual treat, then 24 is the one for you.