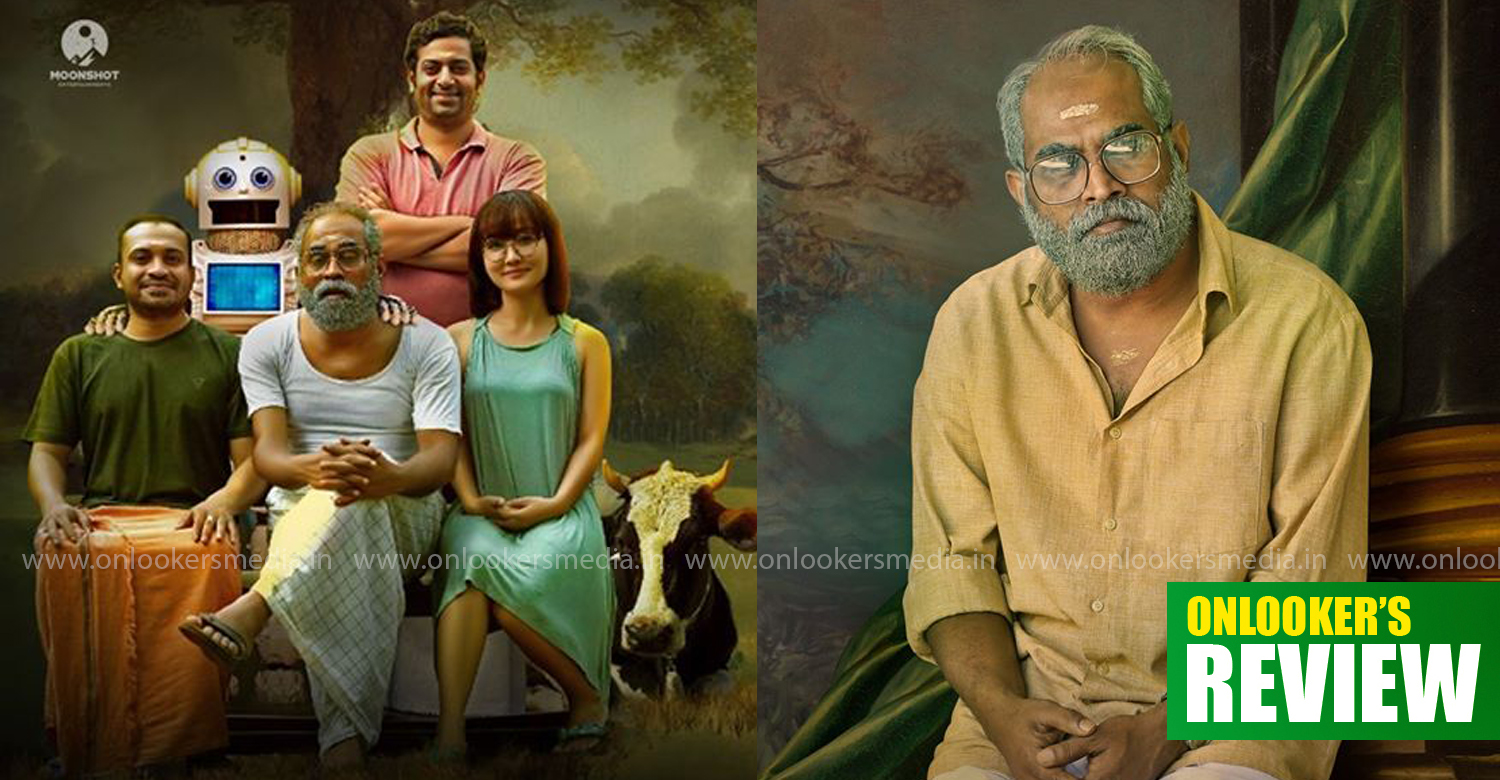 ‘Android Kunjappan Version 5.25’ stars two of the best performers in Malayalam cinema currently – Suraj Venjaramoodu and Soubin Shahir. Along with them is an adorable robot, centered around which is an endearing story that’s filled with genuinely funny and stirring moments. Ratheesh Balakrishnan Poduval has written and directed the film. Let’s get into the details.

Bhaskara Poduval (Suraj) and his son Subran aka Subramanian (Soubin) live in a quaint village side in the North of Kerala. The father is a moody, stubborn person who wants his son by his side all the time. He wants his son to find a job at their own locality so that he can be at home by night. The 34-year-old Subran, though responsible, is fed up of taking care of his father all day and wasting his life in the village. Through his friends, the mechanical engineering graduate lands in a high profile job in a robot manufacturing company in Russia. Subran, though very affectionate of his father, decides to leave and appoints a home nurse to take good care of him. Bhaskara Poduval finds it tough to adjust and fires all his helps. Subran is worried and that’s when he learns about the concept of having a robot as a home nurse through his colleagues at work. Subran brings home a robot to take care of his father. From here on, it is about how a beautiful bond develops between the old aged man and the robot, which is named by the villagers as Kunjappan, thanks to its resemblance to a dwarf in the locality.

A robot taking care of an adamant old man is a very fascinating idea and Ratheesh, the writer-director, has cashed in on it really well. The screenplay is free flowing till the last half hour when it hits a few rough notes. Being ambitious in professional life is never a bad thing and so is a father’s expectation that his son be by his side. Here, the film thankfully does not really judge the two lead characters and neither does it give a proper closure.

Human-robot interaction stories have been told umpteen times before in other languages but it’s a first in Malayalam and that itself is this film’s biggest USP. While Shankar’s ‘Enthiran’ minimized it all within around 20 minutes, here, a good amount of time is spent on the robot’s misadventures, how it does all the household chores, taking care of its master when he is ill, thereby forming a bond, and how the naive villagers react to all this. Bulk of the running time is spent on establishing their relationship and those are easily the best moments in the film. Towards the end, the film loses steam and the ending seemed hurried. There is also a lack of clarity in some important scenes. Another drawback is regarding how the villagers have been represented in the film. Though the humour does work really well, it is quite strange that the makers chose to showcase an entire village in today’s Kerala as scientifically challenged with zero knowledge on robots. But on the plus side, through this approach, they have tried to address issues like discrimination on the basis of religion and caste.

Both the lead characters are well sketched and the actors have also done extremely well to help us connect to them and feel their emotions. The initial half of the film, especially after the arrival of the robot is a fun riot with Suraj Venjaramoodu in top form. There are only a very few scenes where he is actually seen smiling but his antics are rib-tickling. His body language, which includes even the slightest of mannerisms are very convincing and full marks to the actor’s eye for details. It is another stand out performance from him.

Suraj is well complemented by Soubin, who comparatively has a less challenging role. In spite of that, Soubin still manages to make a mark with a very subtle and matured performance. Particularly impressive is a scene where he breaks down in front of his father on the dining table. Several newcomers and lesser known actors are part of the film and most of them make an impression. Another notable performance was from Saiju Kurup who once again nails the fun-guy role. The female lead Kendy Zirdo has the good looks but her performance felt over exaggerated.

Along with the Poduval-Kunjappan bonding, there are also two other tracks – the love story of Subru and his Malayalam-speaking Japanese colleague and the other is a budding online relationship. Bijibal has composed three songs for these tracks and all of them fit perfectly for the situation. Technically, the film is very sound with apt cinematography by Sanu John Varughese and very impressive VFX works.

So the bottom line is that, ‘Android Kunjappan’ is a film that’s not entirely flawless but still is thoroughly entertaining. Families will love it.