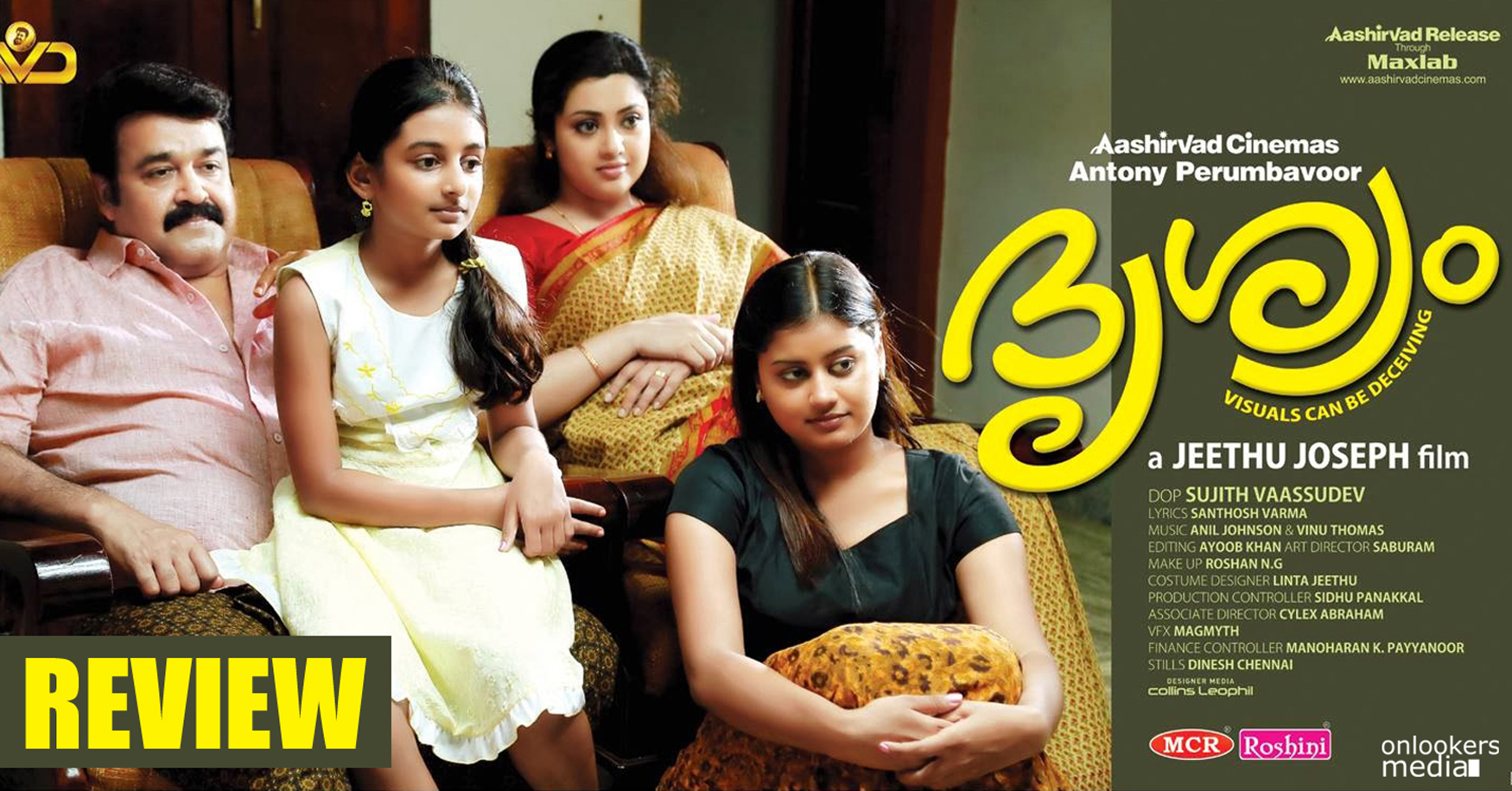 Today the movie Drishyam was released and at the very beginning of this review we have to say that this December 19 will be marked in the history of Mollywood as it had given us one of the best ever film made in Malayalam film industry. From the above sentence itself you all have assumed what may be the quality of this film. Yes, it is indded one of the best ever and Jeethu Joseph-Mohanlal team had delivered a real classic or a gem of a film to the film lovers of Kerala. Before the release of this film it had not created much hype and it was marketed as a feel good family film. But there was hope as Jeethu joseph’s last film Memmories is a big hit and Mohanlal is always the man on whom malayali audience pin their hopes on forever.

Drishyam tells the story of an ordinary man named George Kutty played by Mohanlal and about his family including his wife and two daughters played by Meena, Ansiba Hasan, Esther respectively. George kutty is the owner of a local cable TV set up in his village of Rajakkadu and leading a happy family life. But an interesting turn of events happens in his life when his daughter and wife accidently kills a boy who came to threaten them with a mobile clip of the elder daughter which he had taken during a study camp in which she had took part. That boy happens to be the son of a highly ranked police officer and also a high official in the business field. For George kutty his family is everything and the film shows us how he faces this problem and saves his family.

Mohanlal as George kutty was at his natural best and he reminds us of the comeback made to cricket field by someone like Sachin Tendulkar after an injury lay off or a small period of lack of form or something. Before Drishyam Mohanlal had 2-3 flopes and he had made a terrific comeback as an actor and as a star through his flick. Actors like Kalabhavan Shajon, Meena, Roshen Basheer, Asha Sharath, Esther Anil, Siddique, Ansiba Hasan etc were just brilliant and Shajon was quite exceptional as the cruel police constable. Asha Sharath was another show stealer and it was her best till date.

The DOP by Sujith vasudev and Ani Johnson’s songs were superb. But the real star in this flick is the script written by Jeethu Joseph along with the terrific performance of Mohanlal and he once again showed us that why he is been called as the complete actor. It is a family film and thriller at the same time. The climax portion was unbelievable and we bet that you had never witnessed such a great climax in mollywood and the standing ovation people gives after the film is amazing to hear and watch.

We recommend all of you to go for it as it is a must watch and have to say that if you miss this you were probably missing the best malayalam film of the decade or may be the best in Indian cinema of the last 5 years at least.