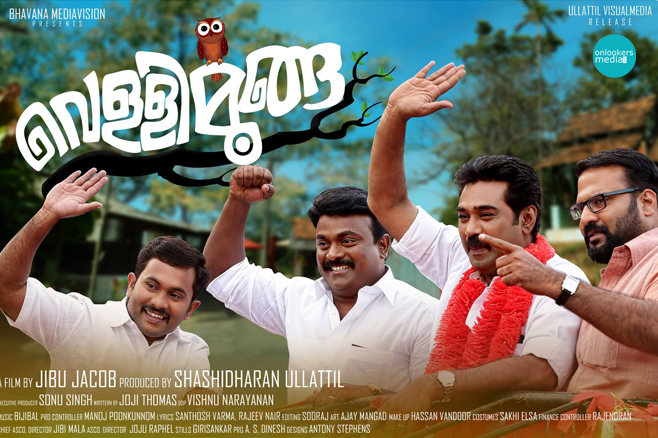 Vellimoonga is a political comedy which scrutinizes the different aspects of politics with Biju Menon in the central role. Mammachan’s (played by Biju Menon) father is an ardent follower of Gandhiji. He serves everyone with selfless attitude.Unfortunately he passes away unexpectedly and leave  Mammachan  and the other members of the  family in financial crisis. Mammacham takes the responsibility of the family but is unable to fix the problem of severe monetary issues which is haunting him and his family.

But money is not the only factor that bothers him. He is in his early 40s but he is yet to find his soul mate. Mammachan realizes that the financial situation of his family is getting worser and worser every single day. He is desperately in need for something that would take him and his family out of this miserable situation. Soon enough he becomes aware of the fact that politics has an entirely different side to it which could be extremely profitable if you have a wise strategy. He officially joins a party and kicks off his life as a politician.

Tony (which is portrayed by Aju Varghese) is a true-hearted friend and adviser provides him with all the support he needs. Mammachan understands that politics is not as easy as he imagined it to be.  He adopts different methods so as to secure a place in politics. On the other hand he meets Lisa (played by Nikki Galrani) and is immediately struck by the love at first sight. He conveniently ignores the fact that he is a bit too old for the girl and makes up his mind to marry her.  But, he later learns that she is the daughter of his school life crush played by Lena and it makes his love life problematic. Mammachan’s life becomes eventful as she pursues success both in his political and love life.

Vellimoonga maintains the tone of humour right from the beginning to the end. Director Jibu Jacob and the script writer Joji Thomas deserve applause for the clever use of comic elements without forcing it on us. Biju Menon is perfect as Mammachan. The high point of his character is that he is not essentially good or bad. He is adorably cunning which makes the character lovable and interesting.

Aju knows his part well as a fair amount of comic sequences is created from his interactions with Mammachan.  Nikki Garani makes the most out of  the limited options she has in the movie. K.P.A.C Lalitha, as usual, excels in her role as Mammachan’s  caring mother. The other main casts of the film including Siddhique, Tini Tom, Lena, Kalbhavan Shajon Sunil Sukhada rise up to occasion as their character make significant contibutuions to the main thread. Asif Ali’s guest appearance is the wow moment of the movie.  The songs of the movie are good especially the song Lalee la li is quite popular as it matches up to the jovial mood of the film.

Overall Vellimoonga is a movie which will bring a smile of satisfaction on our faces.