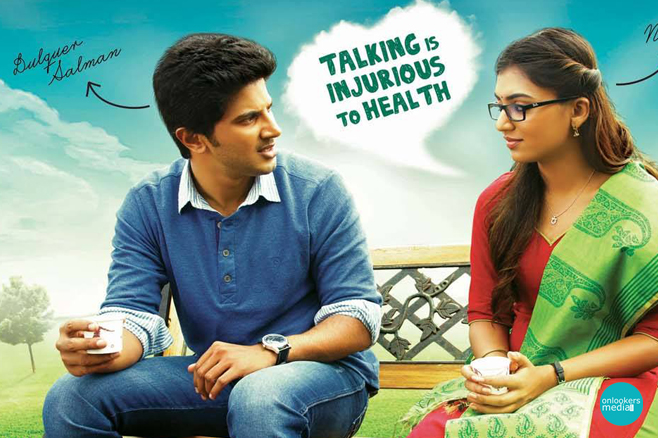 The name of the movie forces us to think that the movie might be about someone who gets in a lot of trouble because of his inability to hold his tongue. But movie literally means what it says in the title as the movie deals with a rare speaking disease.

The story takes places in one of the most beautiful places in Kerala Thenmala located in Idukki The central character -Aravind (which is played by Dulquer Salman) is a talented sales representative whose ambition is to become a radio Jockey. He simply loves to talk to anyone who would listen to him.  On the other side, the female lead Anjana (which is played by Nazriya) is a juniour doctor who is more or less a private person.  The village gets  hit by a strange epidemics which is found to be harmful to the vocal abilities. It naturally causes the villagers to panic and how it gets hold of the lives of the central characters   form the main chunk of the movie. The yesteryear actress Madhubala also participates in the movie as Sridevi.  Arjunan, Chemban Vinod, Maniyan Pillai Raju, Vinu Chakravarthy are the other main casts of the movie.

Despite of Balaji’s Mohan attempt to keep the gravity of the subject intact, the plot outline is too trivial to take it seriously. A lot of farfetched and senseless d incidents do more harm than good to the movie. Besides, the second half is so loosely connected that once get the feeling that even director does not know how to work put things in the end. The idea to conjure a disease which audience are not very familiar with was good but unfortunately the overall presentation a far cry from actuality and pushes our willing suspension if disbelief to limit.

The biggest positive of the movie is Dulquer- Nazriya who definitely is one of the cutest pair in the Malayalam film industry. Dulquer delivers a fair performance even though he seems to lose his grip in a few occasions.  He suits well in the character who is sweet, innocent and fun loving person. It is somewhat refreshing to see Nazriya in a role of self observer since most of her characters have portrayed her as bubbly and pleasure-seeking girl. It is great to see Madhubala back on Malyalam movies. The supporting characters are merely to add to the length of the movie as they do nothing to elevate the significance of the plot.  The credit must be given where it is due.

Balaji Mohan has views something innovative and entertaining but the film is weak in the creative aspects which mars the beauty of the concept.