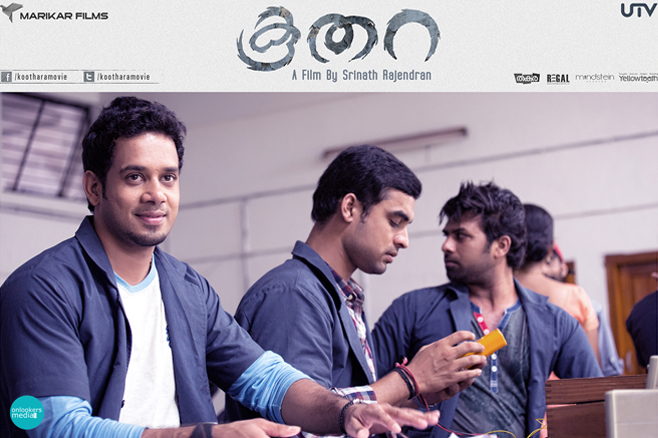 Koothara is a movie arranged by Srinath Rajendran with mystery as the predominant feature of the theme. Kollywood heartthrob Bharath shares the main spot with Tovino Thomas and Sunny Wayne in the movie. The  main female ledas of the movie are portayed  by include Bhavana, Janani Iyer, Gauthami Nair, Shritha Sivadas. The supporting actors  consist of Baburaj, Neenu Kurup and the others. But the star attraction iof the movie is obviously Mohanlal who does a cameo in the movie.

The film starts with Koobrin (played by Bharath) Ram ( played by Sunny Wayne) and Tharun ( Tovino Thomas) as engineering students who are not eager to comply to the rules and regulations. They create quite a havoc in the college and hostel which leads to a number of suspensions and ultimately to dismissal. They finally make bold decision to start their own business. But, their inexperience and low maturity comes to play as their business venture turns out to be an utter flop.  They meet an intriguing person by the name Usthad Saali (played by Mohanlal) who talks them into buying a fishing boat.  The movie is all about consequences this decision has on their lives.

It is good to see extremely talented Bharath back on a Malayalam movie after the trendsetting movie For the People. His character with “you do not tell me what to do” attitude makes him slightly annoying but cool at the same time. Sunny Wayne and Tovino Thomas complement Bharath’s character fairly well. Bhavana, Janani Iyer and Gauthami Nair have surprisingly little to do in the movie.  Mohanlal has only a small part to do but his character is the heart of the plot.

Mohanlal gives a fresh life to the character of Usthad. But the problem is that his character Usthad Saali is perhaps one of the least developed characters in the movie.  Despite of being the anchor of the story, the character does not really help the story in any way and makes it more complicated than it really is. The only saving grace of the character is Mohanlal himself, who tries everything possible to make the character special with his unparalleled acting abilities.

The story of the movie is not really bad but the overall presentation of the story lacks clarity. The first half is fulfilling with some genuine laughs and interesting events. But, the second half becomes dull and fails to carry on the same trend.  Cinematography work is definitely one of the high points of the movie and Pappu needs to be appreciated for his superb work  The prejudiced opinion on women is evident in the movie which at least some, especially women may find objectionable.   The movie is a below average movie with an underwhelming plot.