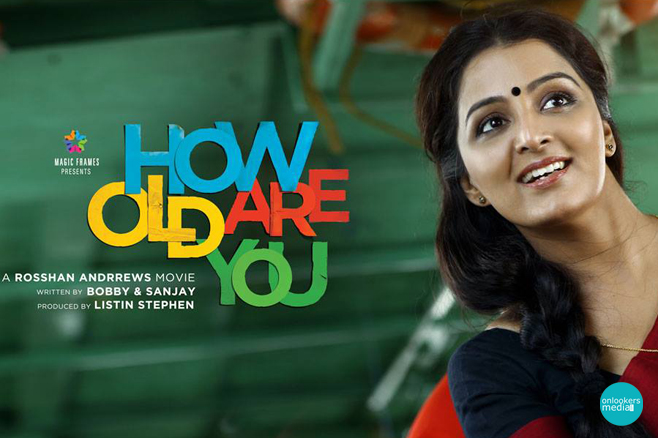 How old are you made it to the headlines owing to the fact that it was the return of the beloved actress Manju Warrier.  Ever since it was made public that Manju will be playing the principal role, fans were thrilled and overjoyed. This created considerable hype to this Roshan Andrews movie.

The movie analyses the life of an ordinary woman Nirupama Rajeev (Manju Warrier). She lives with her husband Rajeev Narayanan (Kunchacko Boban) and her daughters Lakshmi Rajeev(Amritha Anil). Nirupama is a Revenue Department employee and Rajeev works in Akashvani. Nirupama’s only goal is to keep her husband and daughter happy and is willing to make sacrifices for them. But Rajeev is unhappy with her and always find fault with her. Even her daughter seems to take her granted and is even rude to her. Adding insult to injury,her age seems to unveil itself on her faces as she is 36 years old while Rajeev looks much younger to her. This lead to people mistaking him as her brother which also is a factor that attributes to the vexation of Rajeev. Even her daughter taunts her pointing out her age.

Neerupama feels helpless and isolated. Rajeev becomes more and more restless and irritated as he is unable to migrate to Ireland because of Nirupama. Her life suddenly becomes dramatic when she gets a rare opportunity to meet the President of India.But she finds the pressure too much for her to handle and she passes out in front of President. This incident spreads like wildfire on  Facebook and other social medias and she becomes a subject to laugh about. In the mean time Rajeev manages to secure Visa for him and his daughter and decides to go to Ireland without her. She meets her college mate Susan David while seeing them off who is an independent corporate woman. She takes little time to realize that Nirupama is holding herself back because of family obligations. She motivates her to bring back young energetic Nirupama who was immensely talented and had high ambitions in her life that moment of revealation brings drastic changes to her life.

Instead of resigning to her fate she decides to do something which will make her family and herself proud. She sets up a vegetable farm which will open the window of opportunities not just for her but for several other women like her also.Her concept gets a huge reception from different parts and finally. She gets a second chance to meet President. This time she meets him with confidence and Nirupama wins back the self respect as well as respect from others including her family. She leaves to Ireland to live with Rajeev and Lakshmi with a new found respect and happiness.

Roshan Andrews presents the picture of an ordinary woman who we can find around us. The film is not the story of a Nirupama. Nirupama represents all those women who lose their self respect and identity in their quest to gratify their families. Manju proves once again that she is one of the finest actors the Malayalam film industry has ever produced. Her long absence from movies has not affected her performance in any way. Her reaction when she has to correct that Rajeev is not her brother but her husband is a class in itself .The audience could read from her eyes the embarrassment and desperation she suffers when the strangers assume him to be her  brother only because her husband looks younger than her.

Kunchako Boban should be congratulated for daring to accept the role of Rajeev. He is not a bad man but  he never lives up to the concept of life partner as he leaves Nirupama all alone to face her problems. He does not even care about Nirupama’s feelings and emotions. Kunchako Boban has definitely made statement that he has come a long way from his chocolate boy image with his stunning performance in the movie. Amrita Anil who plays daughter to Manju has definitely made a good impression among audience. Lalu Alex, Kanika and Kunchan also have significant roles in the movie and they do leave their stamp on their characters.

Related Items:How Old Are You