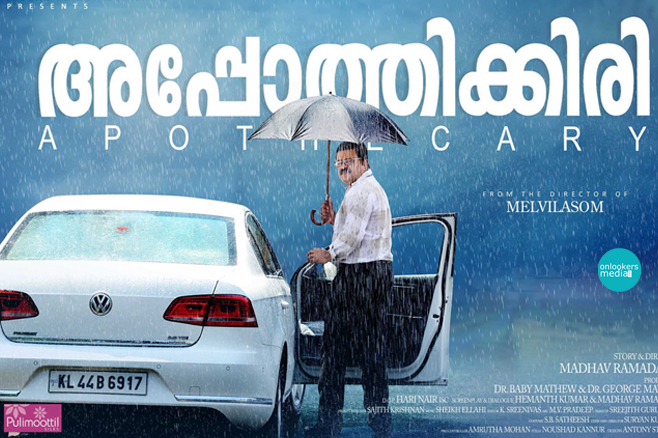 After Melvilasam, Madhav Ramadasan is back with his new movie Apothecary which deals with a subject of high importance namely contemporary medical system. Suresh Gopi who is deemed in general as an action hero is seen in completely different avatar in the movie. The movie also sets the stage for the return of Abhirami who was not seen in movies for the past few years.

The plot is build up on the character Dr.Vijay Nambiar who is the main protagonist of the movie. The film uses the technique of flash back to elaborate on the plot. We are first introduced to Vijay Nambiar who is in a coma state after a serious accident which is ensued by a severe brain injury. We then go back to the past of Vijay Nambiar where several facts are revealed which form s the main theme of the movie. Vijay Nambiar is a skilled neurosurgeon who renders his service to Apothecary, a popular hospital. His spouse Nalini Nambiar (which is played by Abhirami) is a gynecologist in the same hospital.

Vijay is an ardent follower of medical ethics and does not use his professions as a means to reap benefits at the cost of patients. But unfortunately, the hospital does not read along the lines of Vijay as it is a private hospital and look on medical field as a sort of business. The hospital authorities exert pressure on Vijay to conduct some experiments on patients without their knowledge which Vijay refuses to do at first.  But, as they tighten their grip on Vijay he finds no other option but to yield to their demands. He performs highly dangerous experiments on a number of patients including Subi Joseph and Prathapan. We get a detailed description how the hospital takes advantage of poor and illiterate people through the character Subi who visits ICU to have a look at Dr. Vijay. He recalls how he reached the hospital with  severe damage to facial nerves and  how he  along with  others were  made the scapegoat for the hospital partially because his family was too poor to raise the money for the treatment and partially because of their illiteracy.

The movie then focuses on the mental state of Dr. Vijay as he finds it hard to justify his actions even to himself.  The horrifying truth gets the better of him and he is disgusted with the present situation in which he is trapped.He falls prey to the state of delirium which causes him to see different patients who have been used for the tests. This accounts to his accident which nearly costs him his life.  But, he comes back to life after he comprehends that while his test may  have destroyed the lives of few patients or even to lead to the death of a very few, his test have also aided him in saving lives of many patients.  This thought induces him with confidence and he soon leaves the hospital after recovering from the aftermaths of accident. He becomes a reformed man, ready to fight for what is right and quits the job in Apothecary and goes on to start a new organization meant only for charity. His wife and many other employees from Apothecary offer their support to him and join him in his new venture.

Madhava Ramadasan has come with a strong theme for Apothecary and he succeeds in bringing forward the far reaching consequences of business mentality displayed by the hospital authorities.  The film is truly a wake up call for those who work in the medical field and to others who put their own merits ahead of moral virtues.  Suresh Gopi seems to be tailor made for the role and it is nice to see him doing something out of his comfort zone. He does not overdo his expressions especially intense emotional scenes which keeps the character real and relatable.

Abhirami fits well in the role of an ideal wife who stands by his side and remains to be his strength. Asif Ali also has done a marvelous job as Prathapan though his role is small compared to that of Subi. However, the two actors that shine bright in the movie are Jayasuryan and Indrans, While Jayasurya throws light to pandemonium he goes through because of tests Indrans bring tears into our eyes as a helpless father who could do nothing except to watch his son suffer. Meera Nandan, Seema G, Nair, Neeraj Madhav and Kavitha Nair goes their hundred percent to their characters.  Madhav Ramadasan does not disappoint us with the movie. But at some points, it does feel as if he could have treated it better as it fails to keep up with the intensity with which the story is presented with. But on the whole, the movie is definitely a must watch movie which gives a much needed slap of reality on our faces.

How Old Are You Review
Bhaiyya Bhaiyya Review
To Top