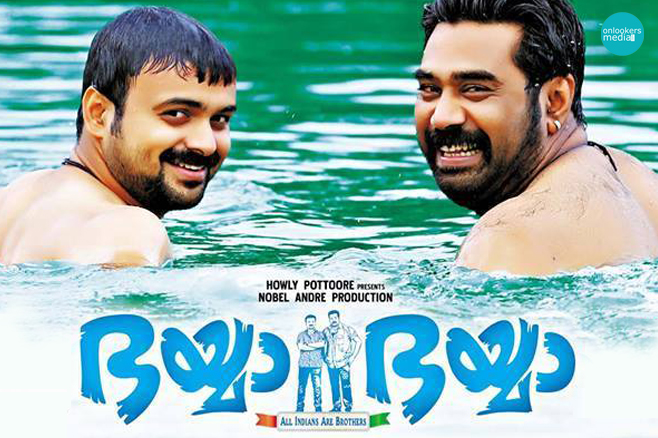 Bhaiyya Bhaiyya is the latest Johny Antony’s multi starrer movie with one of the hottest duo now Kunchako Boban and Biju Menon. The plot has its foundation on the topic of Bengali workers who settles in Kerala in search for jobs.  The   narration of the story depends heavily on the soliloquy of Babumon (played by Kunchako Boban). Babumon lives by providing workers including Bengali workers for the needy people. He has a brotherly affection towards a man who also happens to have the name Babu ( Biju menon). He is a Bengali by birth but has been living in Kerala since he was a child.

The major development in the story happen with the unfortunately death of a Bengali workers. They decide to take this body to his home in Bengal. But they are not alone in the journey as they are joined by few others who take the journey for various  reasons. The team includes Angel (played Nisha Agarwal) who actually run aay from he home so as to unite with her longtime boyfriend Babu. Then, there is Soman who just wants to explore Bengal and finally Santhi (played by Vinutha lal) who is a tamil native and chooses to travel with them for the monetary reasons. But their journey seems  to be more like  an adventure as they encounters with several unprecedented incidents.

The Director Johny Antony and script writer Benny P. Nayarambalam try their best to make this journey as interesting as possible. There are several moments which guarantees  genuine laughs from the audience. But, there is a serious drawback in the movie which is the presentation of the main thread. The introduction of the movie gives us the feeling that we may get a more detailed investigation into the lives if Bengali workers who is forced to leave their homeland  so as to make a living. But, the movie only give a superficial picture of these workers and is not dealt with the expected seriousness.