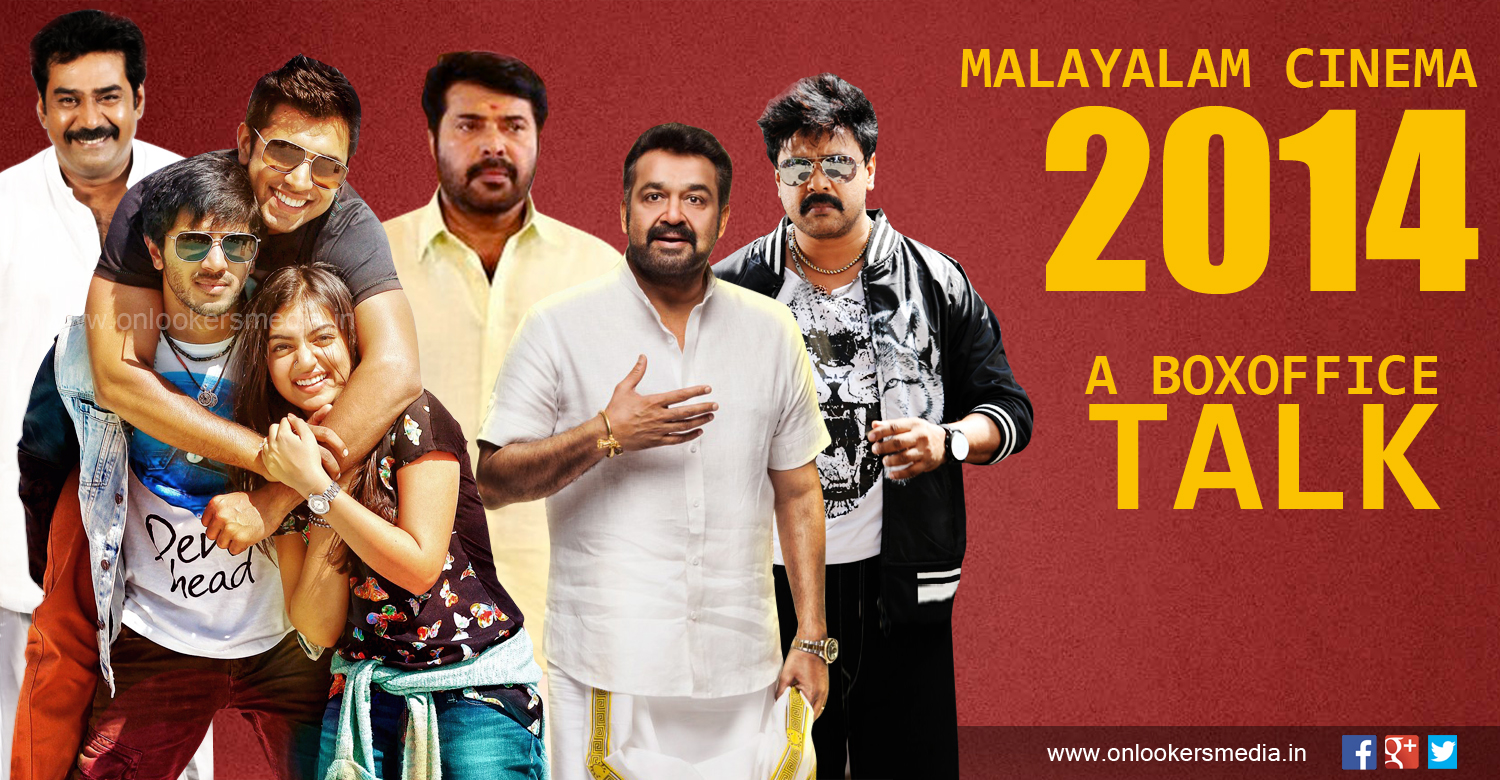 2014 is been an year of mixed bag for Mollywood. There have been ups and downs at regular intervals, surprising winners and shocking failures and we also witnessed unique way of marketing of films and at last we are presenting you with the actual figures that tells the story of success rate in Mollywood this year. Firstly we can check the highest grossing films of 2014..

Bangalore Days, which was directed by Anjali Menon with a huge star cast of Dulquer Salmaan, Fahadh Faasil and Nivin Pauly, which grossed the biggest in this year’s releases. (Drishyam is grossed way ahead than Bangalore days this year, but Drishyam was released in 2013 December 19th). This film has grossed 25 crore+ in its total run and simply the number one success of this year.

Vellimoonga directed by Jibu Jacob with Biju Menon in the lead was the most surprising hit of the year and it ended up as a blockbuster with more than 17 crores in its total run.

Peruchazhi, directed by Arun Vaidyanathan opened to huge negative reviews. But the film had collected more than 15 crores owing to the unbelievable star value of Universal star Mohanlal. He once again proved that he is the best of the best when its come to the matter of star value and popularity.

Ringmaster, which was the only hit of dileep this year has grossed 14 crore+ and the film was the first film of Rafi after his split up with Mecartin.

Rajaadhiraja was directed by debutant Ajay Vasudev and at last through this film Mammootty has got a decent hit after a terrible streak of flops in last 4 years. The film has grossed above 12 crore in its total run.

Sapthamashree Thaskaraha: was directed by Anil Radahkrishnan Menon starring Prithviraj in the lead. It was the Onam winner of 2014 with more than 11 crore gross collection.

Vikramadithyan had grossed 11 crore in its total run and Laljose once again reap gold at box office. Dulquer Salman and Unni Mukundan were the lead in this film.

Om Shanthi Oshana also grossed 11 crore in 2014 which was directed by debutant Jude Antony Joseph and the lead roles was played by Nivin Pauly and Nazriya.

7th day, which was also a debutant director’s film starred by Prithviraj grossed 10.85 crores from its total run. The film directed by Shyamdhar and scripted by Akhilesh paul.

How Old Are You was in the news as it was Manju Warrier’s come back film directed by Roshen Andrews and scripted by Bobby-Sanjay Duo. It grossed 9 crore from its total run.

And the films which made huge profit share in 2014 was Vellimoonga, Bangalore Days, 1983, Om Shanti Oshaana, Vikramadityan, How Old Are You, Ithihasa, Ringmaster, Sapthamasree Thaskaraha: and 7th day. Because Gross collection will not give huge profits of certain films as their budget was so high. And at the same time some low budget films with not much gross can get great profit share.