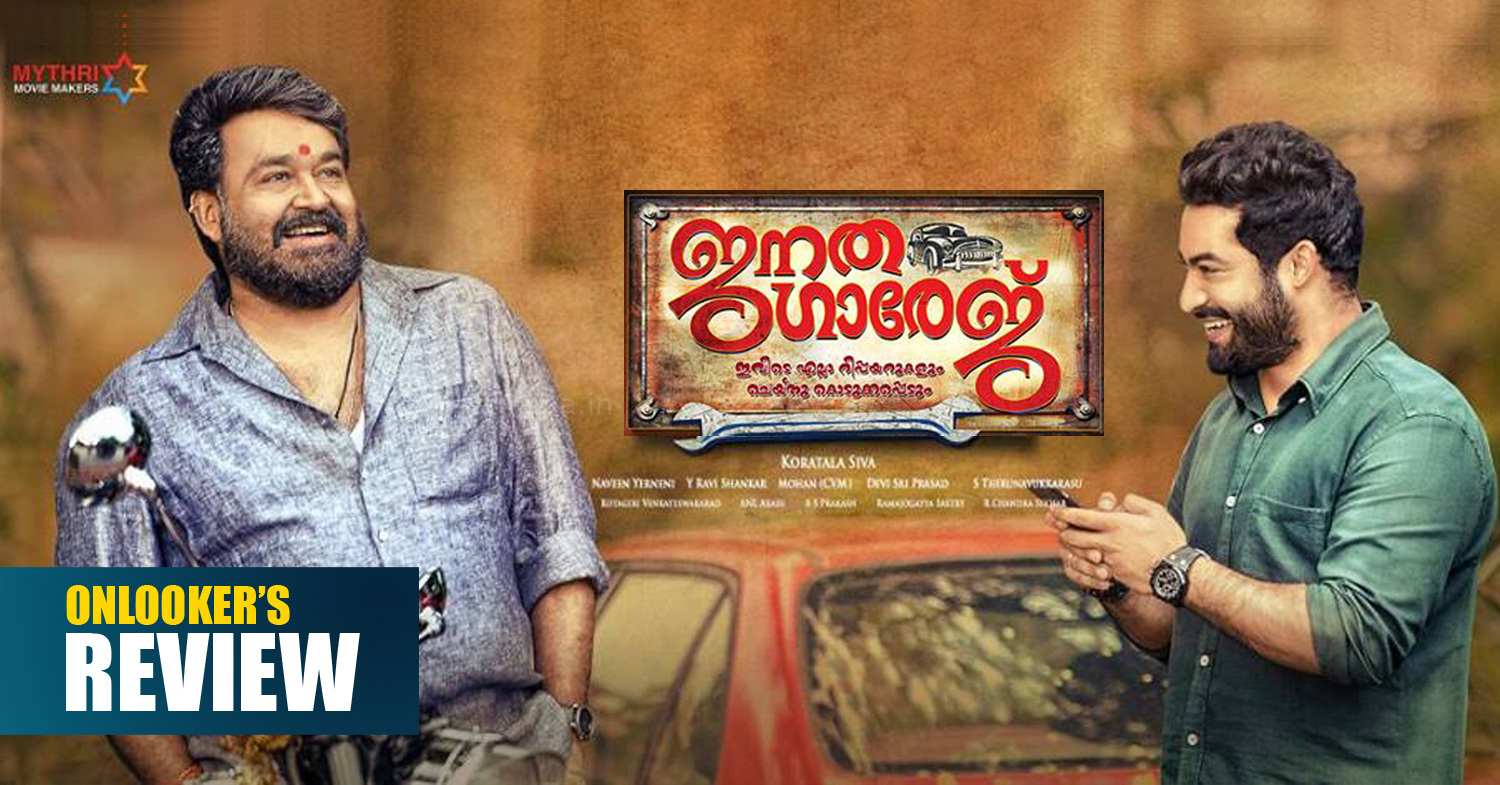 Janatha Garage, the most awaited South Indian movie has released on Thursday starring the Complete Actor Mohanlal and Young Tiger of Telugu Industry, Jr NTR. It was scripted and directed by Koratala Siva and Mythri Movie Makers had produced the flick.

Mohanlal plays the character named Sathyam who believes that it his duty to help and protect others and Jr NTR plays the character named Anand who is lover of nature. The plot revolves around these two characters. Sathyam starts to work in a Garage which was built and given to him by his brother. Later he had to fight for the justice of people. When law fails to provide justice for people, Janatha Garage becomes their only hope. Janatha Garage started to repair people as well along with vehicles. People began to depend on Janatha Garage for anything and everything. There comes some big changes the life of Sathyam and family.

Even though there is not much freshness in the subject, the plus point in the plot was that, the director Koratala Siva had mixed the class and mass elements in right proportions. After the films like Mirchi and Srimanthudu, which are his first two films, Koratala Siva had successfully used that class and mass mix technique in this movie as well. Powerful dialogues are the highlight of his this film.

No one can call this as a pure NTR Movie or a pure Mohanlal movie, as it belong to both of them. Because the director had provided equal importance for both the stars in the plot. He had given a great role to Mohanlal and both Jr NTR and Mohanlal stood head to head in the movie in terms of the importance of their characters. The director needs to be appreciated for that.

Both of them had given great performances. Jr. NTR shines in dance and action sequences and Mohanlal had given heart touching performance in emotional scenes. He once again showed the world why he is been called the Complete Actor with a stunning performance as Sathyam. Last month he had delivered a terrific performance in Manamantha as well. Female leads were as usual there for some romance and song sequences. Samantha and Nithya Menon came as female leads and Kajal Agarwal had done an item number. They don’t have much screen space in the male dominated movie.

Even though the story of the movie is based on the old Telugu formula, the director had presented it splendidly giving equal space for two super stars from different film industries. It never made the audience to yawn inside the cinema halls and it was great entertainment indeed from the Janatha Garage team. In the first half we saw the building up of the main plot with character descriptions. Second half gives us clear hints to where the movie is going and the climax was also predictable. But above all these, the film is a good watchable Telugu movie for the people who loves entertainers.