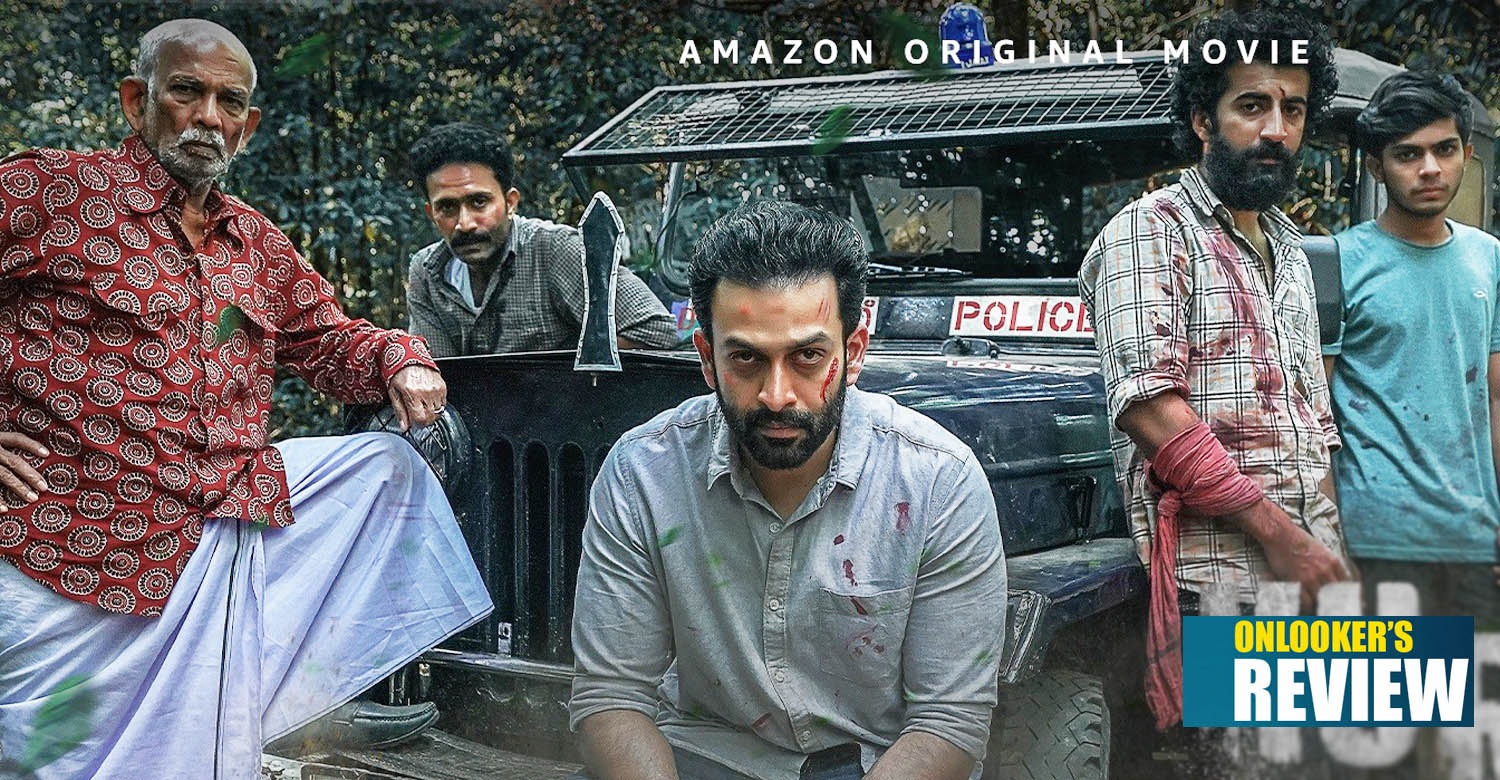 ‘Kuruthi’ is set somewhere in a remote forest area in Kerala. The film’s primary focus is on two families, both of whom have suffered irreplaceable losses from a landslide that occurred exactly a year back. Ibrahim’s wife and daughter get killed in the mishap and he is still grieving over their loss. He lives with his teenage brother, Rasool, and father, Moosa Khader. Suma, a widow, and her brother Preman, who lost his wife, live next door.

One fateful night, a cop barges into Ibru’s home along with a murder accused in a religious hate crime. They are on the run from a group who are trying to kill the accused. Ibru’s family is forced to provide them safe shelter for the night. However, things take a turn when Laiq and his men enter the picture.

‘Kuruthi’ comes with a very intriguing tagline ‘A vow to kill, an oath to protect’. So there’s a section who is hell-bent to kill and there’s another bunch who have promised to protect at any cost. Which one of the two eventually succeed is what the film’s about.

‘Kuruthi’ directed by Manu Warrier and scripted by Anish Pallyal tries to showcase the current political climate in the country within a closed space with only a handful of characters. On one hand is an extremist Muslim who quotes from the Quran about the need to kill and serve justice. On the other side, there’s someone who has promised on the same Quran to protect. He firmly believes that his faith doesn’t give the right to take anyone’s life. So the film becomes a Good Muslim vs Bad Muslim narrative after a point as they represent different ways of following the same religion. The Hindu characters are also painted grey but the focus is hardly on them and that’s what make the film’s politics questionable.

The tension in the first 45 minutes builds really well and gives the feel of watching a gripping thriller. The characters are established rather quickly before we sense something is about to go wrong. It is after the halfway stage that the film starts losing its steam and eventually ends up flat.

Murali Gopy is exceptionally good as the righteous cop. It is through his character that we get to know that something ominous is about to come and he presents it convincingly. Mammukoya’s Moosakka must be the only person who makes real sense in the film. The veteran has never done a character like this before and he seems to have really enjoyed playing it. With his trademark slang, stone-faced wits and some mass moments, Mammukoya steals the show. Wish his frequent sermons were done away with though.

Prithviraj’s dialogue delivery was a bit off but he does well in the action scenes. Youngsters Naslen and Sagar Soorya also make an impression. The exchanges between these two might seem amateurish and strange but those lines are straight from the WhatsApp university that spreads hate and bigotry. Through them, the film shows how the seeds of religious hatred are sown from a very young age.

‘Kuruthi’ could have been a great film if only it was as engrossing as its first 45 minutes. It had great potential to be a thought-provoking social commentary that speaks about India’s current political scenario but somewhere lost the plot with weak writing and lack of depth. A lost opportunity indeed.

Sarpatta Parambarai: Arya and Pa Ranjith together pack a punch in this ‘not-just-another-boxing-film’
Sunny Review: Jayasurya and Madhu Neelakantan try hard to deliver a decent output
To Top