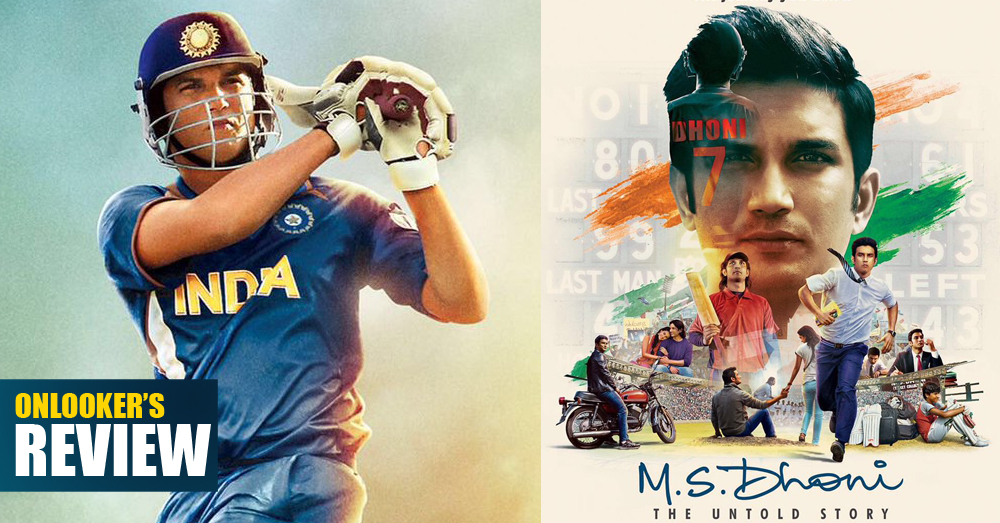 MS Dhoni the untold story, is about the real life journey of a small town boy to the the World Cup winning captain of Indian cricket team. Mahendra Singh Dhoni’s life from the streets of Ranchi to that glorious night of April 2nd in Wankhede where India lifted the World Cup after 28 long years is shown in a very ‘biopic’ manner

Sushant Singh Rajput has put his life and sweat into this movie. The walk, the gait, the coiffure, even the trademark helicopter shot is amazingly enacted. The aura of calmness that we see on Dhoni when he is out in the field is totally absorbed by Sushant and the actor has given a knockout performance. There is rarely a moment of fuss or anxiety in his face. Sushant Singh Rajput is the backbone of the movie and he truly deserves all the accolades that is awaiting him for his performance.

Director Neeraj Pandey has done a remarkable job with his direction. He has already proved his mettle as a filmmaker with movies like Wednesday and Special 26. But making a biopic is not an easy job. There is a risk in doing a biopic on a person who is still in the limelight, but Neeraj Pandey has taken the risk upon him and deserves a pat on the shoulder. He has done a lot of research and more importance has been given to the cricketer’s journey and the struggle he had to undergo.

But the plot is very predictable, the story had great potential to show more about Dhoni as a captain. But sadly we only get a very few scenes like that. The cool headed captain who takes unorthodox decision and takes everyone by surprise were not seen here. The movie is more about his pre-international cricketing days and his struggles throughout the journey.

Earlier when there was a biopic made on Azhar’s life, most scenes looked tacky and amateurishly shot. DOP, Sudheer Palsane has done a great job, particularly the accident scene and the one in the railway station just before the interval. VFX team has also done a commendable job with the recurring morphing scenes. The movie is a bit long but it is worth the time spent because it is difficult to show a journey spanning 15 years in such a short time. One can feel the intensity heating up just before the final shot and Amaal Malik has done a great job with the background music.

True to the name, the movie shows the untold story of the cricketer’s life. Apart from all the cricketing action, the movie shows 2 endearing love stories. The songs were soulful and pleasing to the ears. Another interesting aspect of the movie is it stays away from the usual cliché parts of the politics played in the selection committee. But there are some scenes about the controversial decisions Dhoni has taken as a captain, the makers have clearly underplayed this part. But the movie stays true to the fact that it is a biopic,and no unwanted masala like forced in goosebumps scenes or action block or even lip sync songs. Only very few cinematic liberties have been used here.

Sushant has perfected the art and he fits in superbly for the role. He plays proper cricketing shots and the hard work he has done for the movie has not gone in vain. Anupam Kher, Bhoomika, Kumud Mishra, Rajesh Sharma all other actors who played the friends have done a great job.

All together MS Dhoni the untold story is a watchable movie but you are a fan of Mahendra Singh Dhoni then you are in for many goosebumps moments.