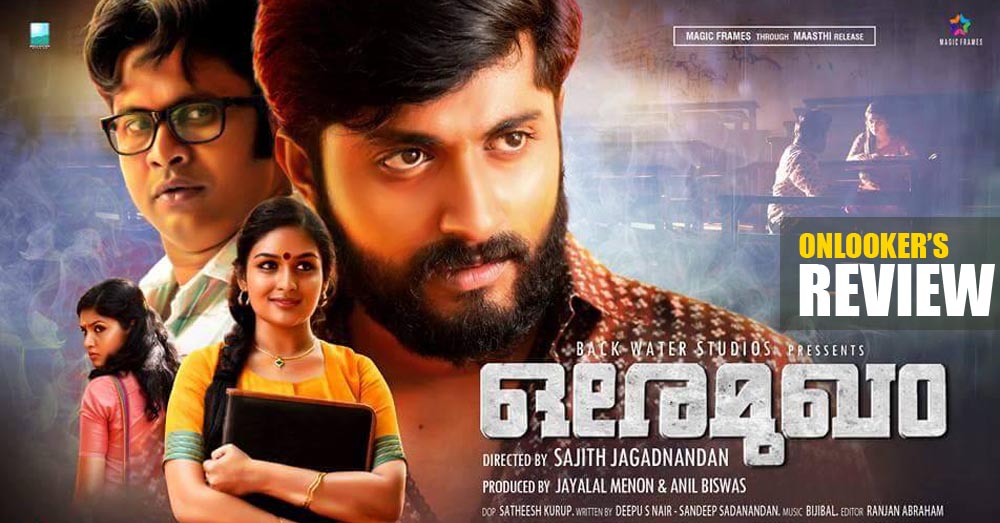 Ore Mukham directed by Sajith Jagadnandan (Kaashh fame) is the latest Malayalam release that graced the screens here in Mollywood. This film which was earlier planned to release in the second week of November, had postponed many times due to various issues.

Dhyan Sreenivasan played the lead in the movie which was produced by Jayalal Menon and Anil Biswas under the banner of Backwater Studio. Magic Frames had distributed this campus thriller in theaters here in Kerala. The flick has been written by Deepu S Nair and Sandeep Sadanandan. It had got a great anticipation level before its release as its trailer was a quality one.

The plot of the movie revolves around the character Zachariah Pothan played by Dhyan Sreenivasan and his campus life which is set in 1980’s. The flick starts with the murder of a character named Aravind Menon played by Devan and the investigation officer played by Chemban Vinod starts following the murder mystery. His suspicion led him behind Zakariah Pothan who is a wanted criminal in another murder case which happened long years back. A Television reporter named Amala, played by Jewel Mary also following this case for her channel program and the investigation of both the Police officer and TV reporter unravels the past of Zakariah Pothen in front of us.

We have to say that Sajith Jagadnanadan had failed to deliver an impressive output as the movie lacked all the elements that makes a good thriller. We have seen campus thrillers like Classmates and what made such films beautiful is the right mixing up of elements like Campus life, romance, suspense, comedy etc. Ore Mukham has all this, but it was mixed up in a disproportionate manner and the end result was too bad to say the least.

From the very beginning itself, the movie began to lag and never really made the audience glued to their seats. It lacked the intensity in most of the situations and even failed to establish the characters well. There was a confusion among the people as they don’t really able to sort out who is playing who, in the movie.

The interval punch was not that cool and the climax, which is the most important part of a thriller, was also not given the desired effect. The screenplay has many loose ends and it never hold together. At many places, it feels that the movie is going out of the control of the director.

When it comes to performance, only Aju Varghese shines in this movie. He was superb as the character named Dasan and he is the only positive thing that we can take out from this movie. Dhyan Sreenivasan had struggled to lift a heavy character like Zachariah Pothan and that struggle was evident in his performance. Others like Renji Panicker, Chemban Vinod, Deepak, Maniyan Pillai Raju, Arjun Nandakumar, Jewel Mary, Gayathri Suresh, Prayaga Martin, Sneha, Abhirami etc were decent but not that great.

The DOP from Satheesh Kuruppu was not up to the mark as the color tone used to separate present day visuals from past was some kind of annoying for the viewers. It was not pleasing to the eye of the viewers. Bijipal’s music was decent but that too was not great as we know that he can do more than this. Renjan Abraham was the editor and he did a fine job to keep the movie under 2 hour. But still it lagged mainly due to the sluggish screenplay and unimaginative direction.

In total, Ore Mukham is a disappointing movie experience, which offered too much and delivered nothing. We will not recommend this movie to you and if you want to watch it, then do it at your own risk.