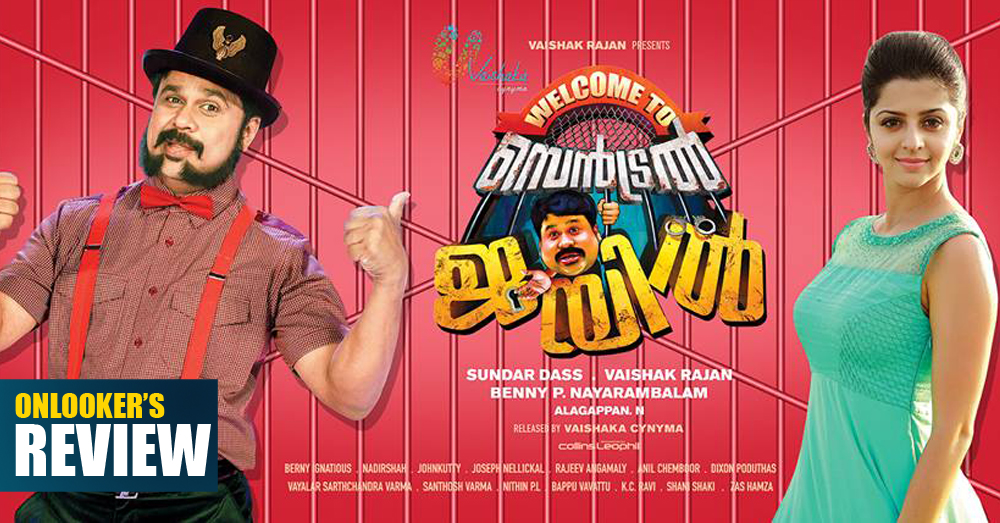 Welcome to Central Jail is the latest offering from Popular actor Dileep to his fans and film lovers in this Onam season here in Kerala. The flick was directed by popular director Sundar Das who is making a comeback after some years and it was scripted by Benny P Nayarambalam. This comedy entertainer is bankrolled by Vysakha Cinemas owned by popular movie producer Vysakh Rajan. Vysakha Cynyma had distributed this movie as well. Vedhika played the pair of Dileep in this flick and it was in Sringara Velan that she played his pair before. It was her debut film in Mollywood. Sundar Das had made films like Kuberan, Kudamattam, Sallapam etc with Dileep.

The flick revolves around Unni Kuttan, a character played by Dileep who has a habit of taking the punishment of the crimes done by others and by doing that continuously, central jail is more or less like a second home for him. He was in fact born in Central jail as his parents were prisoners there. So he is emotionally attached with jail. Once when he comes out from Jail. He fall in love with a girl named Radhika, who is a studio owner. In a particular circumstance, saves her life from a killer and from there the plot moves forward to the main area.

We can say that Welcome to Central jail is a movie aimed at the audience who loves mindless comedies. The screenplay by Benny P Nayaramabalam focused on situational humor. Most part of the movie has been shot in jail and the humors were related to the inmates of jail who comes there after doing different crimes. But it seems like most of them are fools or behaves like clowns.

The performance of Dileep was the main positive of the film. As Unni Kuttan, he really given a hilarious performance. He was energetic and it was not a character that challenged his great comedy timing. Vedhika also done a decent job, even though she did not had anything extra-ordinary in the screenplay to perform. Others like Sharafudeen, Kanaraan Harish, Kailash, Aju Varghese, Renji Panicker, Shajon, Siddique, Balachandran Chullikkad, Kottayam Pradeep, Kochu Preman etc had done decent job. But it seems that many of them were underutilized in the movie, considering their potential to do comedies.

DOP by Azhakkappan was decent and provided the atmosphere needed by the plot, with his frames. Berny Ignatius team and Nadirsha had tuned the songs for the movie and we have to say that songs does not have much quality. It came and gone and not stayed in the mind. Editing by John Kutty was good and his cuts helped the movie to move in a decent pace.

If you love typical Dileep movies, then Welcome to central jail will be a treat for you. But don’t expect another Two Countries or My Boss as it does not reached up to that level.