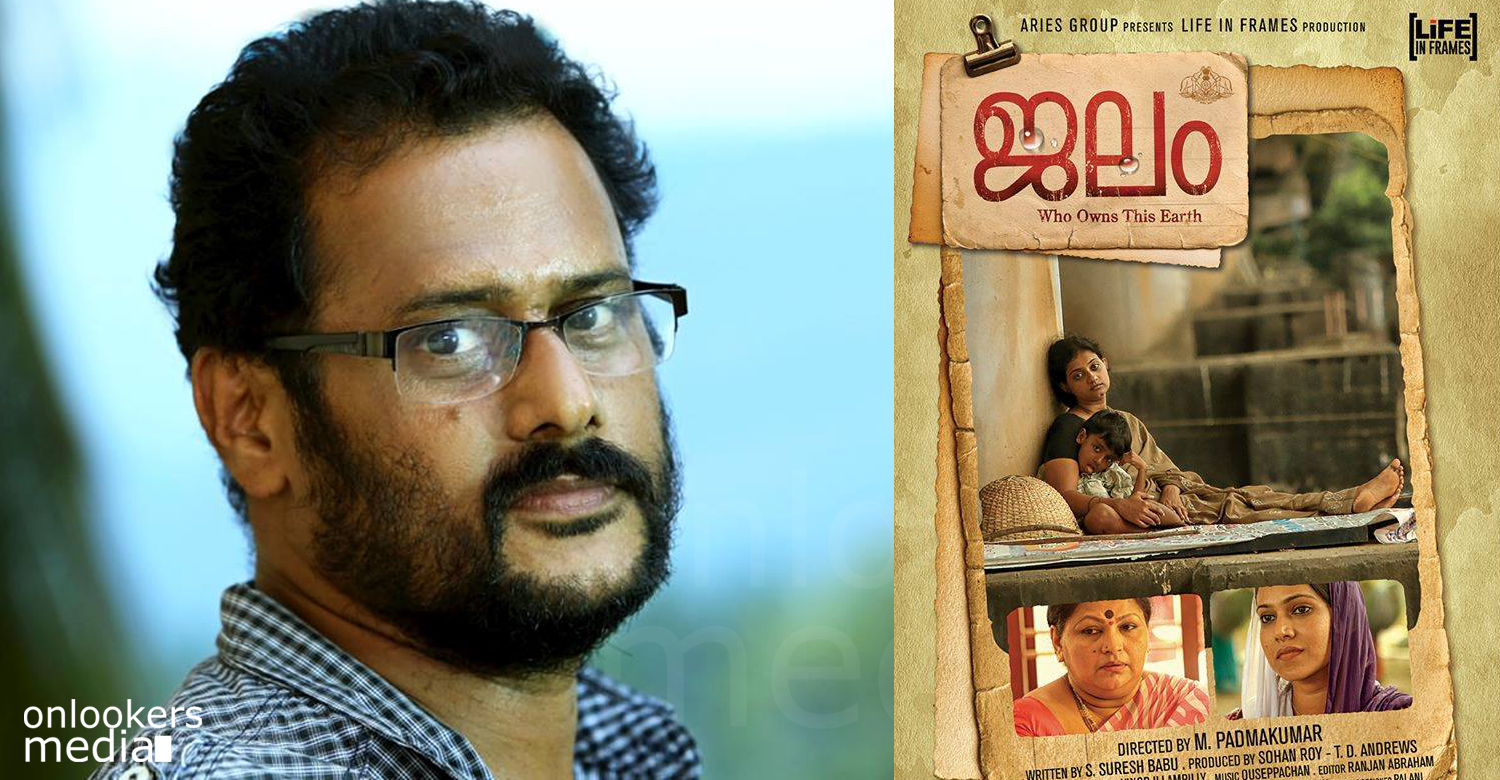 M Padmakumar is known for his films which portrays deep emotions and subjects which concerns ordinary people in our society. Right from the start of his film career , From Ammakkilikkoodu and then through Vasthavam, Shikar etc, he expressed the concerns of common man in the society and at the same time opened up before us the foul plays that happening in the higher levels of society and in political sections. Now he is coming up with Jalam, which is said to be an eye opener for the ruling authorities. He had an exclusive chat with Onlookers Media and here is what he have to say about the film and the idea it tries to give us.

What really made you land in to the subject of this film Jalam..?

The story of the film comes to us through a photo that took by Malayala Manorama chief photographer named Gopan. That photo was about some people who are living on a platform under a bridge. That photo gives us the thought about the people who are homeless and who don’t have a piece of land of their own to make a shelter. That photograph was took by Gopan from a place named Thazhethangadi at Kottayam District. At the special screening of this film many prominent political figures like M A Baby and V T Balram was present and they had showed praises on the film.. So what really the political idea put forward by the film..?

Through Jalam we not really tried to put forward any political idea first. But it gives us certain things which we can see if we can open our eyes to our surroundings. There are lot of people around us who are homeless and don’t have a piece of land of their own to live. Our ruling authorities are cheating them with fake offers and they don’t really making the necessary steps to help these people. More than putting forward a political idea or agenda, we tried to give an idea about the life of some fellow beings of ours around us. So you means to say that the offers from our ruling authorities are just confined to words and not materialized in to action..?

Of course. That’s what I am saying. Because if one don’t have influence in politics or if there is nobody in the higher level to recommend for, then that one never gets what he really deserves or what he is offered by the government. That’s a naked fact we are facing in our society.

The production team behind the film already announced that they will give the earning the film gets from theaters to the people who needs help. Our Politicians are making so much money through corruption and they did not even spend a penny to help people from the money which they gets. What is your take on that..?

An artist can do this kind of charity from the remuneration he gets or a film producer can do it because there is a clarity in the amount of money the gets and they gets legal money as well. So they can use it to help people. But our politicians not even admits that they had committed corruption and then they cannot do such acts of helping people with the money they got. What they got, is from illegal ways and it is a waste of time even thinking about the chance of they are helping with that money.

You have been doing big films with Super stars and under big banners etc. So what really inspired you to make such a small film like Jalam..?

I always wanted to make such movies which gives the society something relevant. Commercial cinemas does not give much to the society. We take so much from the society while we lives and compared to it we really doesn’t gives much. So making this kind of films is an effort from my part to give something back to the society in which we are living. Giving them something which inspires them to open their eyes to the things happening around us. It not just me but there are many technicians, artists etc think in the same wavelength and Jalam is the result of that thought process by us. We have done it without receiving any remuneration and with an eye to help people from the earning we got from screening this film. Jalam gives us an opportunity to fulfill our commitment to the society and we grabbed it. Malayalam cinema is changing now. Now many young stars are coming up and the focus is slowly shifting to them from a Super Star centered industry. How you see this changes going forward..?

Changes are inevitable with time passing by and it is not just in Malayalam Cinema, but it every industry the changes are happening in its desirable pace. But above all we have to keep the goodness in films. That not means every film have to enlighten people or make them good. But at least we can try not to make them bad by giving some bad example through our films. So I have doubts about the success of our films in that respect.

What about Your upcoming projects..?

Some projects are in the planning stage and now I can’t say more details about that.

Thank You very sir for your valuable time and all the very best for your future projects as well as Jalam which is coming to the screens in a few day time.