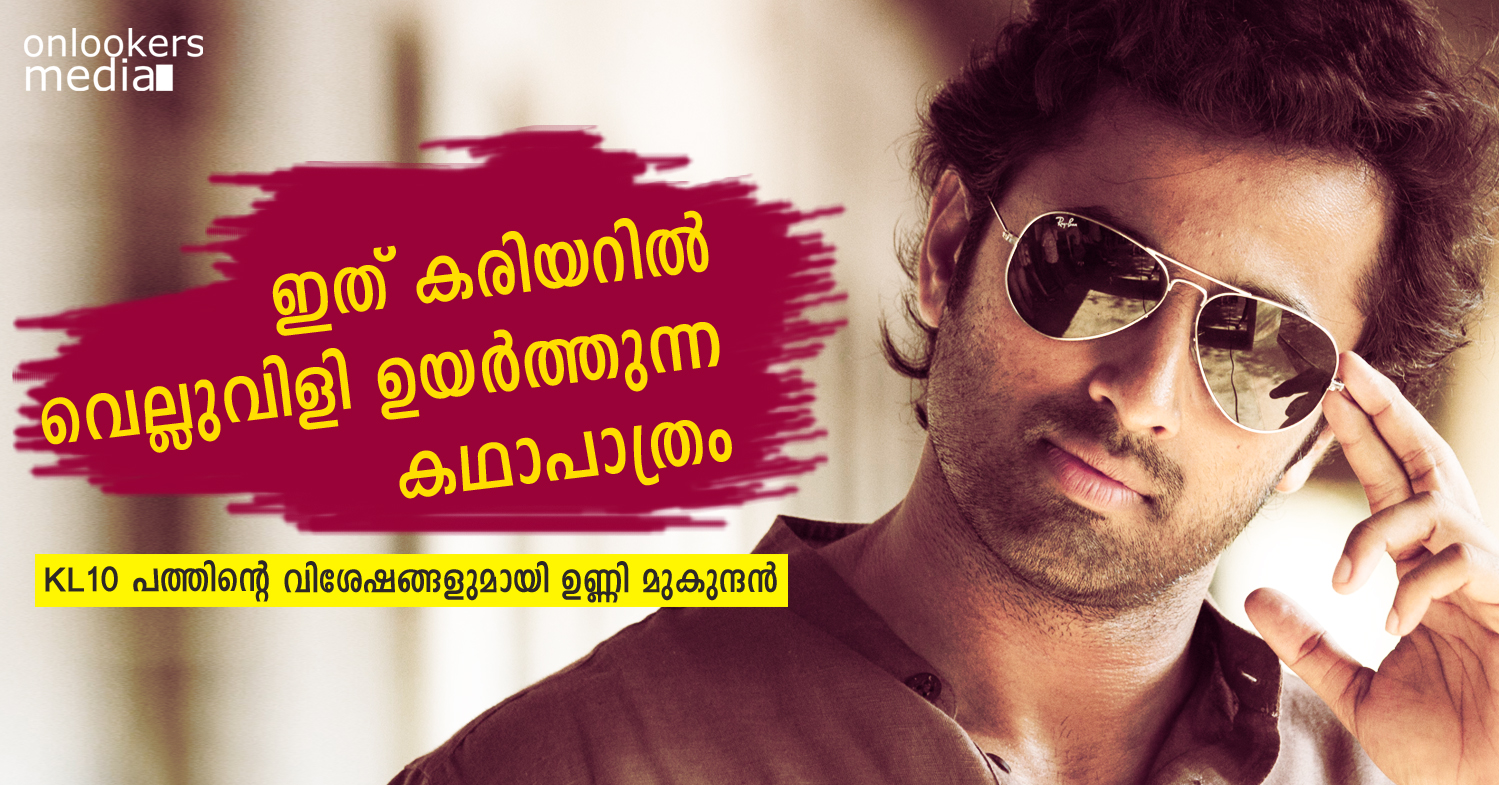 Actor Unni Mukundan is having a promising time ahead with some hopeful films. He had come back strongly to Mollywood with some films like Vikramadithyan and Fireman and all of them got noticed and well appreciated as well. Now the young actor is waiting for the release of KL10 Pathu directed by the debutant film maker Muhsin Parari and the film will hit the screen on this Ramzan season. Unni Mukundan had great hopes on this flick and he opens his mind about the film and about the impact of Lal Jose in his life and career to our media in a recent interview.

First of all please tell us about KL10 Pathu and how it comes to you..?

During the shoot of last supper I met Muhsin, who was the last assistant director of that film. During the course of time we became friends and by the time the movie got released he felt I was good enough to portray the role of Ahmed from the script KL10 Pathu, written by him. I clearly asked him to wait till Vikramadityan got released and if it’s a hit I’ll join hands with him. The movie was super hit and I had lost a lot of weight for that role of Vikram. Muhsin was sure that I can pull of Ahmed with ease and I think it was our blossomed friendship that made him fix me as the Ahmed in kL10 Pathu.

However, there were no producers for this film. That is when I approached Shri Lal Jose. And to my surprise, all that he said was that try to make a good film and worry about finding the producers, I’ll take care of that. This is what the real Lal Jose is. Frankly, i believe that the only reason kl10 movie is being discussed or talked about is because LJ films took the film and Lal Jose stood by it. We just tried our best to make a good film. Let’s hope everyone likes it.

I was literally shocked when I got the call from Lalu chetan asking me to be a part of Vikramdityan, playing the title role. It was those days of my career when I had no film at hand. I mean zero projects on hand and satellite issues had almost killed my professional career. Movies were made on the basis of satellite value and not on basis of quality. Lalu chetan just said u r a good decent actor, try to be as committed as u have been since you started working as an actor. Be focused.

Vikram is a very disciplined guy and he wanted me to be in the best of the shape mentally and physically. He said that we will start the shoot in the coming year and as per his instruction I had lost 17 kilos and became a six pack lean guy. He gave me a superhit movie. He made me a stronger person. More than a director, I found an elder brother in him. The goodness in him didn’t end there as he went ahead and produced a movie with me in the lead named KL10 Pathu.

He is a splendid person and a super producer which every new actor and director or technician would want to work with. KL10 is KL10 because of just one guy and that’s no one else but Lal Jose.

There is a talk in the industry that KL10 Pathu may become a career changing film for you..What about that..?

As an actor it has been challenging in many ways. Mohsin wanted me to lose all the muscle I had built for playing Vikram in vikrmadityan. It wasn’t an easy decision to make and it was also not easy to look muscle free. I used to run like a horse every day to shed the muscle and look like a normal Malapuram ‘Chullan Chekkan’. Then was the part to speak in malapuram accent. With the teaser come out expectations had come up for kl10. I won’t deny but yes people have come up to me saying that this might be a career changing movie for You.

After Vikramadithyan good roles are coming for you.. Is that a result of good selection of yours or just a natural process after a successful film..?

Vikram from Vikramadityan, Shajahan in Fireman and now Ahmed in KL10 Pathu. I am happy that I have been lucky enough to portray roles that had been appreciated or might get appreciated in the future. Yes, I’m a bit more conscious in choosing my films and characters and the people to work with.

What will be the features KL10 Pathu has which offers something new for the audience..?

It is just a feel good Malappuram flick. Let’s wait and see

What are the reasons behind trusting a new comer like Muhsin Parari when he first came to you with his script..?

Muhsin is a man who loves cinema. He lives in a fantasy island. His characters are filled with love. He will surely be one of the greatest film makers which Malayalam Industry will witness. I’m happy that I could bring someone to the place that he deserves the most.

Is that gap before Vikramadithyan was really a planned one..? Because we really saw a freshness in you after the comeback..

Yes it was planned. I had to focus. But I cannot deny that it’s just because of Lal Jose that the actor named Unni Mukundan is still in this industry. He taught me to have self -belief and the conviction to stand up after falling down. I owe all the change or new found success to him.

KL10 Pathu , the unique title can make the audience to think with a pre-occupied mind. Is the storyline is that strong in this film to make that pre-occupied thinking fall upside down..?

KL10 Pathu is a simple fun movie. Please watch it with family. I can’t tell more about the film now.

What you really want to become, a big star in the industry or a good actor who can do any type of roles..?

A good actor can become a star today or tomorrow. So want to be a good actor and for that always ready to make any sacrifices.

Really wants to do a film with Lalettan and praying to get more chances with Mammukka too.

Fans are growing day by day. Is that a source of Pressure while doing films..?

Can you share with us about your projects which are coming in the near future..?

Style to be directed by Binu S, Ithihasa fame. And a couple of untitled projects as well.