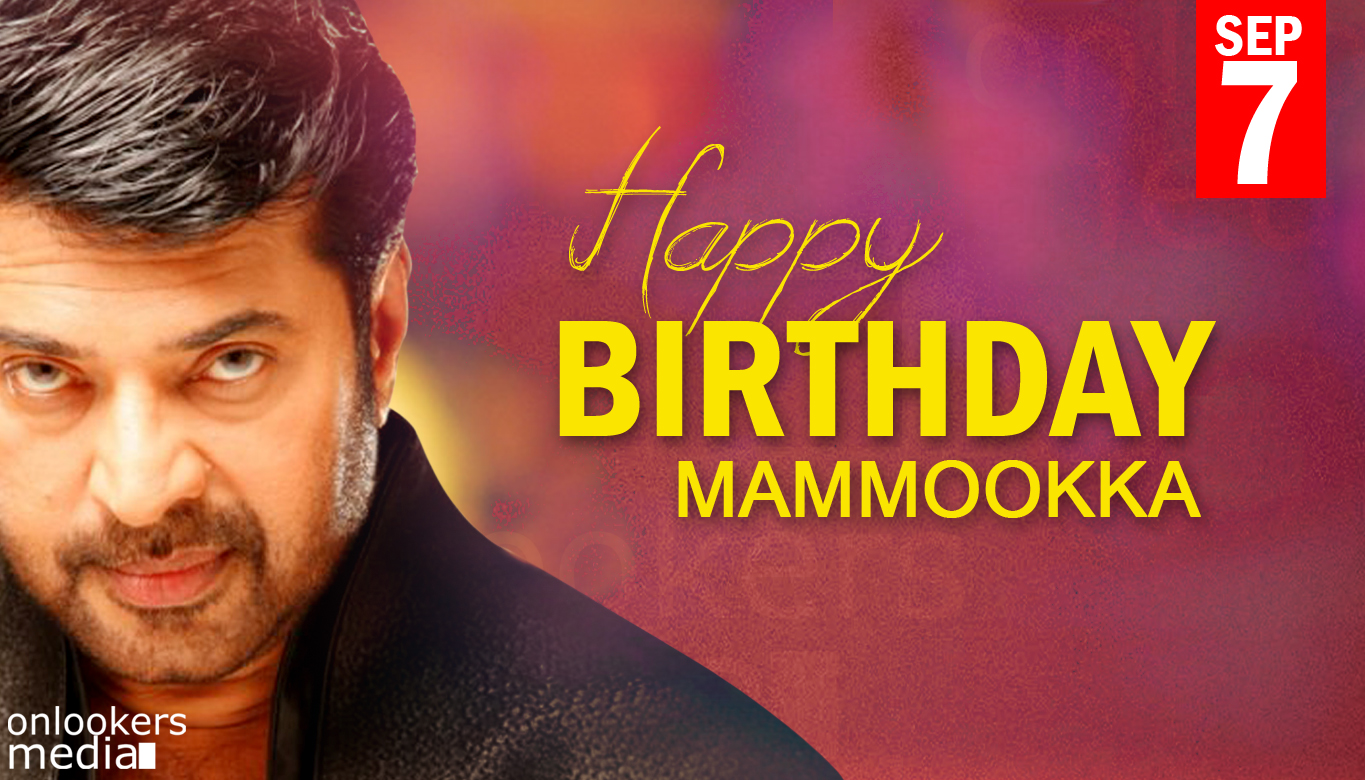 September 7, tomorrow is the birthday of our Megastar of Mollywood, Mammmookka. Malayalam cinema has seen many actors with different calibre and one of them that hit the M Town during the 70’s was none other than the pillar of Malayalam Cinema, Muhammad Kutty Ismail Paniparambil commonly known as Mammootty as his screen name. He is turning 64 tomorrow and is unbelievably fit if we take account of his fitness when compared to the time he was a beginner, he is still the same. He is like that perfect old wine in fresh bottle.Another spectacular feature of Mammookka is his charming, handsome, glamorous looks.

This eminent personality started out his career as an advocate, later becoming an important output in the face of Malayalam Cinema after he joined the field of Cinema. He began his acting career alongside the famous actors of then like Prem Nazeer, Jayan, Sathyan, Madhu, Soman the legends of Malayalam cinema. After appearing in the uncredited, antagonist and cameo roles in the movies. He was successful in proving his talent to everyone in the field when his mentor M T Vasudevan founded the talent of a leading star in Mammootty. And it was K.G George who backed him up by giving role in his films Mela in 1980 and Yavanika in 1982.

After so many years of experience and dedication in the field, Mammootty along with Mohanlal started leading the Malayalam cinema to other languages. The Big M’s were universally acclaimed by their talent exhibitions in different languages other than Malayalam. This 3 time National Award holder has got his character role performances in a wide range that the movies, and the dialogues are simply the best for a malayalee to remember. Now, Mammootty and Mohanlal has become a marketing word in Mollywood that if Big M’s are starring in movie that movie will be successful. Along with Mohanlal, Mammootty has done many movies like Padayottam, Nanayam,No. 20 Madras Mail, Gandhinagar 2nd Street, Kariyilakkattupole,Harikrishnans, Narasimham etc. These two actors compliment each other very well in the Cinema field as well as their business collaborations.

Mammootty has fans all over the globe which enables him to be an international star. This amazing personality is not just related to movies but is also an amicable social worker. He has been the official ambassador for many events which promoted public awareness. This exceptional talent has strived hard to be in the Malayalam cinemascope as it was a tough time adjusting in those hardships behind the cameras. Hardwork pays off ikka is the true example of this reality. So it’s really a great thing that many generations was and is brought up seeing this excellent actor’s films during these years which exhibit his ultimate love for acting.

Mammookka’s latest film Utopyayile Rajavu is his 385th movie which has graced the silver screens on the occasion of this year’s Onam. The evergreen performances of this brilliant actor will be remembered forever that he lives in each and every malayalees hearts. On this eve of Mammookka turning 44 years in Indian Cinema and celebrating his 64th birthday on September 7th, We Onlookers Media wish our Megastar of Mollywood Mammootty a happy birthday. Hope you continue being Ikka’s fan spreading love and watch movies respecting his contributions to the film industry. On September 7th ,tomorrow as it’s his birthday the fans arranged a special show of the movie Big B today – September 6th. We would also like to suggest some of his movies and characters that shouldn’t be missed from his 44 years of contributions to Malayalam Cinema.

May God give you the strength and good health to continue entertaining millions… Happy Birthday Mammookka !!!