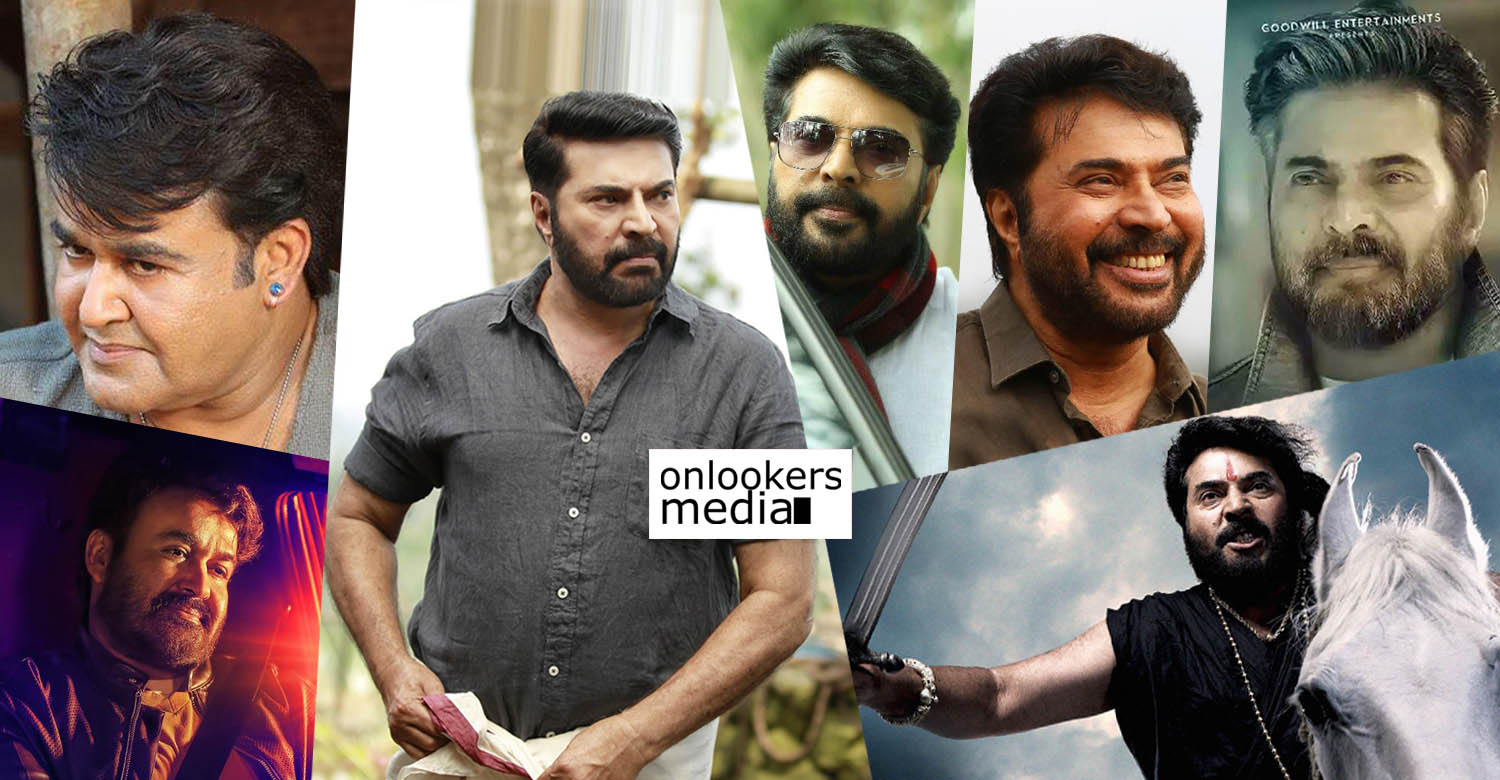 Big releases coming up for Mohanlal and Mammootty!

Mohanlal and Mammootty are the two pillars of Malayalam film industry. They’ve been carrying the industry on their shoulders for over three decades now. Even at this age, their hunger for being part of good movies is remarkable. Both the stars have a slew of projects in their kitty. Let’s take a look at some of their upcoming movies.

Mammootty has committed for over ten movies for the next couple of years. The 66-year-old actor is making a mockery of his age by committing for multiple projects at a time. Some of them are physically taxing as well, but he seems to unperturbed by all that.

Parole, directed by is Sharrath Sandith is the next release for Mammootty. The movie is all set to storm screens on March 31. Mammootty plays the role of sakhav Alex in this movie based on real life events. The narrative travels through three different phases of his life. Mammootty is said to have given such a performance that would remind the viewers of his older days. Miya George, Iniya, ‘Baahubali’ fame Prabhakar, Siddique, Lalu Alex and many others are part of the cast.

Another highly anticipated movie of Mammootty is Uncle. Actor-writer Joy Mathew is backing this movie which is also his second work as a scriptwriter after the widely acclaimed ‘Shutter’. Uncle, directed by Gireesh Damodar is said to be a socially relevant film. It is the story of a 17-year-old girl and her dad’s friend. It is about an unusual situation a middle class family is made to face. Recently, the satellite and remake rights for the Tamil and Telugu versions were sold for a hefty price.

Not just Mammootty fans, but by cinephiles across Kerala and Tamil Nadu are eagerly waiting for this movie. The movie directed by National award winner Ram was recently screened at the International Film Festival of Rotterdam (IFFR). It was also selected among the 20 ‘Must Watch’ movies at the festival. Trustworthy reports suggest that Mammootty’s performance in the movie has the potential to sweep all the major awards this year.

Mamankam is a mega budget period action flick which marks the directorial debut of Sajeev Pillai, a former associate of the legendary Adoor Gopalakrishnan. First schedule has already been completed and the second leg will kick-start by the end of April or May first week. Mammootty is playing the role of a warrior in this movie based on Mamankam, a medieval fair which was held every 12 years from 800 AD to 1755 AD. The festival was held on the banks of Bharathapuzha where brave warriors from across the country would come together to showcase their skills at combat. The second schedule that commences next month in Kochi will have some leading stars from other industries as well.

Mohanlal, on the other hand, is busy shooting for the final schedule of Odiyan. The movie, according to the makers, is shaping up as a mass entertainer with a mix of action, romance and magical realism. Scripted by National award winner Harikrishnan, Odiyan is primarily about ‘odividya’, a kind of black magic and people who practice it are called ‘odiyans’. Mohanlal plays the role of odiyan Manikyan while Prakash Raj and Manju Warrier will be seen in other major roles. Shoot for this movie is expected to be wrapped up very soon to ensure a grand release this year itself.

Mohanlal’s next release will be Neerali, directed by Ajoy Varma. Shoot for the movie was wrapped up month in quick time and the makers are currently busy with the post-production. Since Neerali is an adventure thriller, it has a lot of graphic works. The makers are investing huge amount of money and time to get the best possible output. Neerali has Mohanlal playing a gemologist while Nadiya Modiu appears as his wife. Parvatii Nair, Suraj Venjaramoodu, Dileesh Pothan and Nasser are part of the movie’s supporting cast. As per latest reports, Neerali will hit screens on June 14 as a Ramzan release.