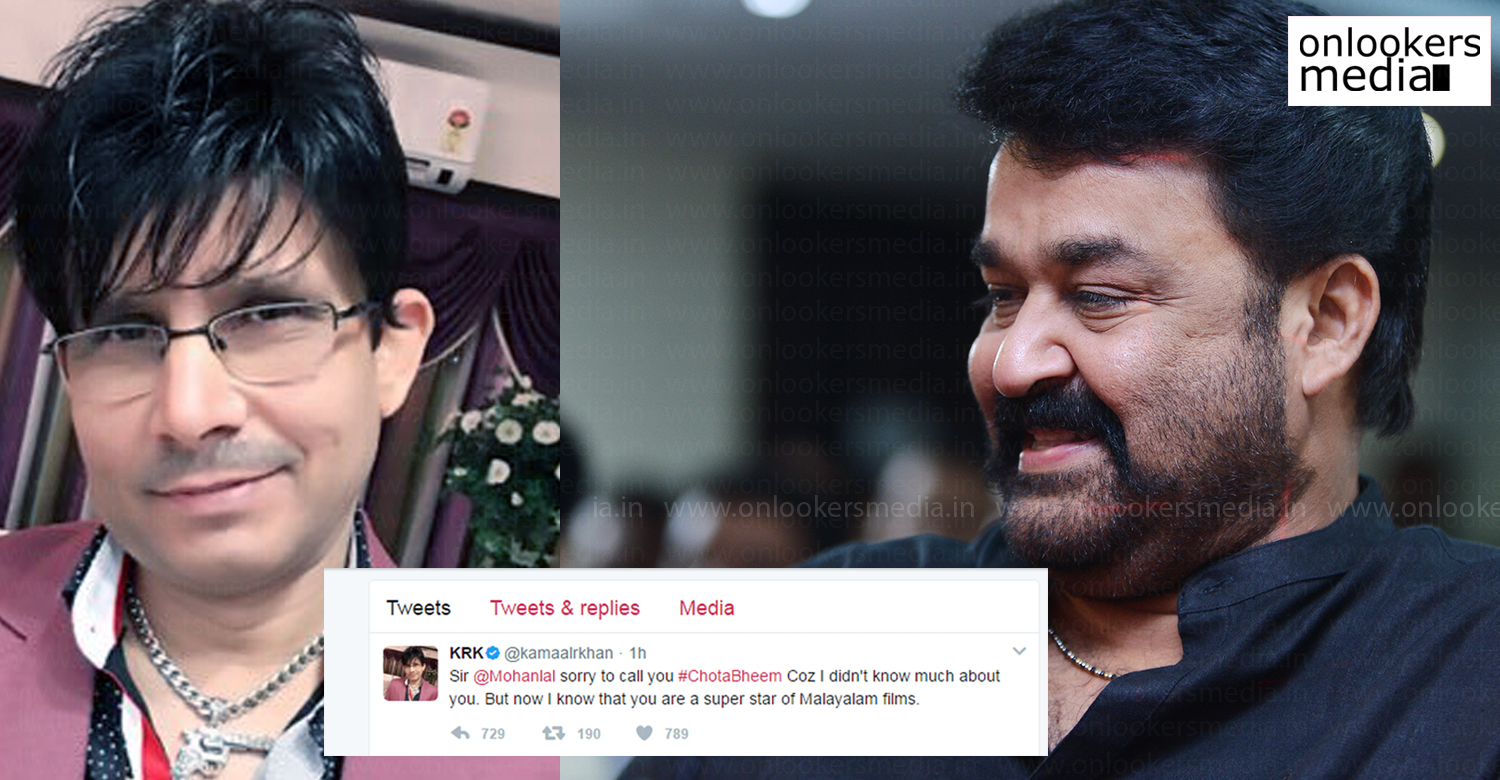 “Mohanlal is the Superstar of Malayalam films” finally KRK apologizes on Twitter!

For the past few days what had filled and featured on the social media walls were the tweets put up by Bollywood star KRK aka Kamaal Rashid Khan. On twitter the star had posted that Mohanlal resembles the cartoon character Chotta Bheem and can’t fit in to play as Bheeman for The Mahabharata feature film. Following, Mohanlal fans and Mammootty fans had demolished the star’s social handles with trolls and abusive. Later the Mallu Cyber Soldiers (MCS) had hacked the star’s Adsense account through which he had being paid for his YouTube videos.

The breaking news this morning has showered is the apology tweet from the star which marks an end to the social controversies put. He had tweeted:

“Sir @Mohanlal sorry to call you #ChotaBheem Coz I didn’t know much about you. But now I know that you are a super star of Malayalam films”

The tweet put up after 10 in the morning had received a lot of retweets and comments supporting the star’s late yet wise thought. One among the trolls that have filled the star’s tweet includes the famous dialogue “Lelu allu… Lelu allu” meaning sorry from the Priyadarshan – Mohanlal team movie Thenmavin Kombathu. The later responses are been eagerly observed.

The star had in total posted 25 tweets that were against the complete actor. Majority were about insulting Mohanlal and his fans for following him. He had also recently tweeted a poll that was used to determine how many on Twitter knew Mohanlal. His recent posts read:

“Last night, I was talking to BR Shetty in Dubai n he said dat he is not producing @Mohanlal’s #Mahabharata means Mohanlal is using his name”

“BR Shetty Said dat Mohanlal was just discussing idea of #Mahabharata with him but he never agreed to produce it. So Mohanlal used his name”

All tweets posted by him had got a huge number of replies which stood against, thanks to the incredible fan base of Mohanlal! Recently celebrities too had supported the actor, Bineesh Bastian was the first among them who had questioned the star on replicating the stunts done by the complete actor in this age. Suraj Venjaramoodu had warned the star that Malayalis would not even send your remains and ashes to your family for burial. Finally, Santhosh Pandit had published a post reminding him that he had played with the lion and it’s cubs.

Mohanlal had announced his biggie The Mahabharata one day prior to the tweet posted by KRK. The movie as announced is made on a whopping 1000 crores budget funded by Dr. BR Shetty, a Dubai based billionaire. The movie is penned by MT Vasudevan Nair with big reference to his Award winning novel Randamoozham. The movie which is releasing in two parts was visualised and is directed by ad film maker VA Shrikumar. The flick which is reported to be a 2020 release will kick-start shoot by September next year. It was noted that Mohanlal had not responded on any media about the tweets posted.

“One and a half year break for Bheeman” Mohanlal clarifies on the allegations put against him
Guinness officially confirms Pulimurugan’s record; end to the fake record controversies
To Top