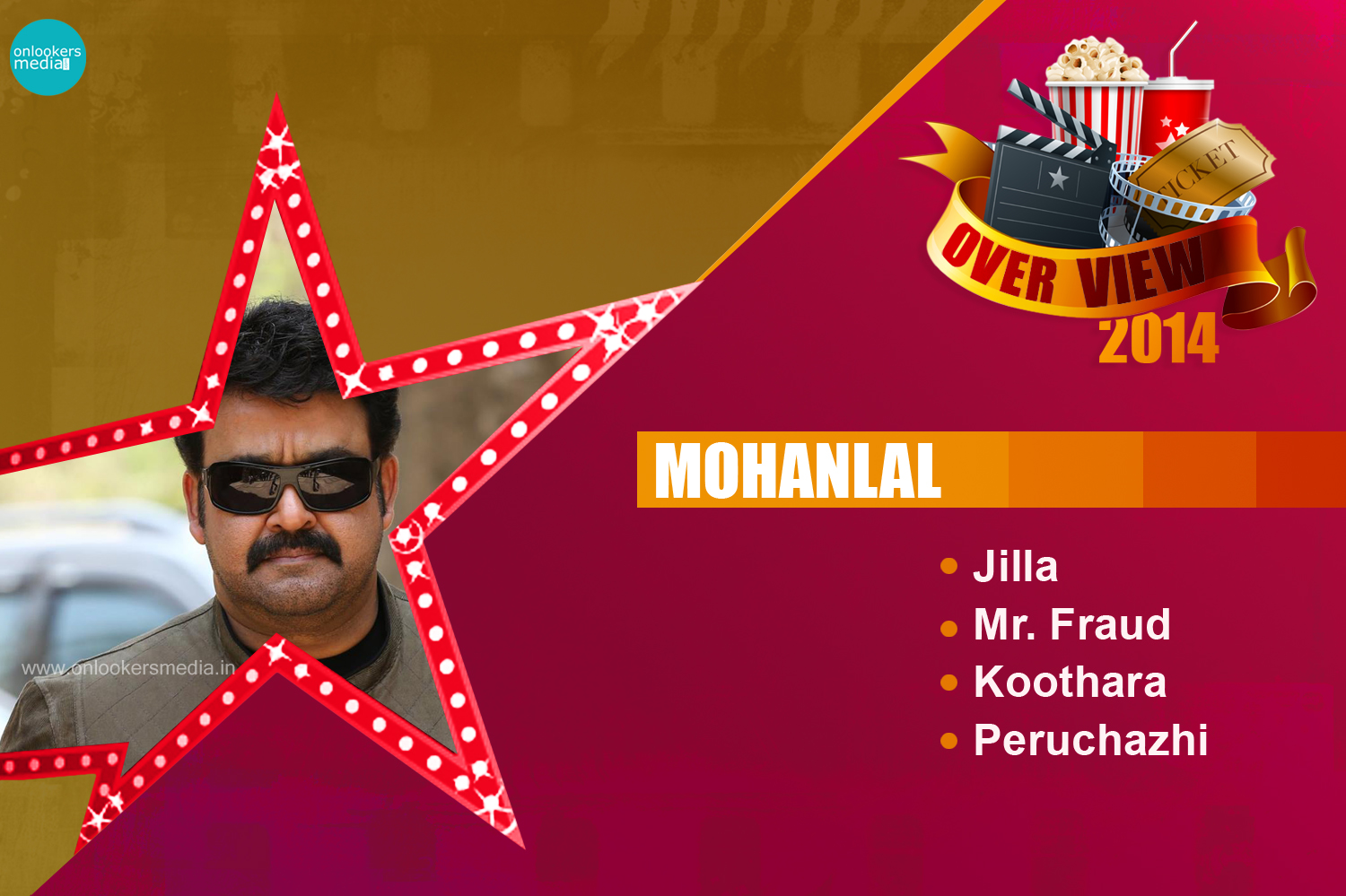 2014, Not so good for Mohanlal, but still going strong.

Year 2014 was not a good one for Mohanlal as he does not have any huge success this year.  He had only 2 main releases in Mollywood with Mr.Fraud Directed by B. Unnikrishnan and Peruchazhi Directed by Arun Vaidyanaadhan. He played a cameo in Sreenath Rajendran’s Koothara in which Bharath, Sunny Wayne and Tovino Thomas played the lead roles. Mohanlal had begun the year with a thunderous Hit Drishyam.  But he did not get a success like Drishyam later this year. Drishyam became all time biggest Hit of Mollywood. The film which got remade in almost all south Indian languages and all set to remake in Hindi too. Even though the film had got released in 2013 December , it ran for almost 175 days in 2014 and it remains the film which got maximum collection in 2014

Jilla
A Tamil film in which he played the central role along with ilaya thalapathy Vijay which got a smashing opening all over  and totally collected a whopping 90 crores worldwide. The film had got mixed opinion, and there was some controversy regarding its hit status as producer came out saying that it was not a much profitable film for him . But anyways Mohanlal’s star value reached sky high in south India with it.

Mr.Fraud
His first main release in 2014 MR. fraud, Directed by B. Unnikrishnan, which got released in the month of May this year. The film had got a great opening owing to the star value of Mohanlal. The film got much of mixed opinion and it was a financial success.

Koothara
The came Koothara which was a fresh and novel experiment and got a great opening due to the presence of Mohanlal, But it also failed at the box office due to bad word of mouth . People who went to see Mohanlal was disappointed as he is only few scenes in the film and the climax also was a let down.

Peruchazhi
The last one was Peruchazhi  which got released in August this  year as an onam release. The film holds the record of this year’s Biggest Opening day collections. The film is only aimed at Mohanlal fans and even after getting negative word of mouth, the film has done a pretty good business and ended as an average or above average grosser by grossing above 12 crores and also amassing a whopping 6.5 crore rupees as satellite right. He once again proved that in star value he is the best we ever have and far far ahead than any other star in Mollywood.

But he have to think wisely while choosing films as the standard of his films had decreased after the success of Drishyam. Anyway Mohanlal is all set to start 2015 with some great projects such as Laila o laila with Joshiey and an unnamed project with Sathyan Anthikkad and Manju Warrier. He also doing a cameo in Rajiv Nath’s Rasam and Kannada film Mythri.  We wishing all the best to the Universal star and Complete Actor Of Mollywood, our own Lalettan.