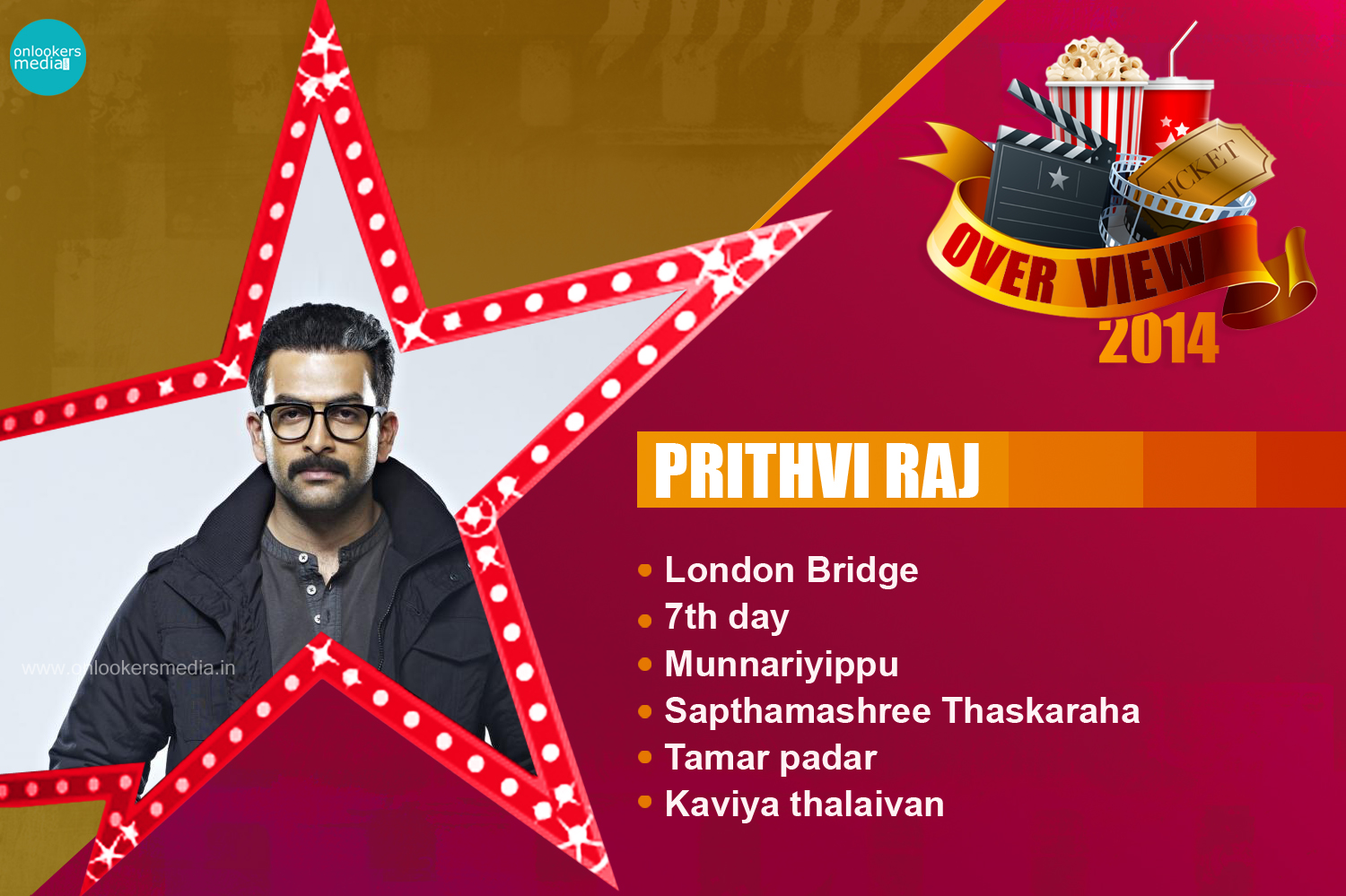 2014, Another year to remember for Prithviraj

2014 has become an year ti remember for our young super star Prithviraj Sukumaran. As an actor and an individual this year gave him a lot of memories to cherish. The most important thing happened in his life is that he became a father of a baby girl this year. It was indeed a wonderful memory for him to cherish all his life. The new born baby girl is named ‘Alamkritha’ and there was some controversy happened when he joined the name ‘Menon’ to his daughters name. Prithviraj now a proud father going great guns as an actor and star too. He had 6 releases this year.

London Bridge
It was directed by Anil C menon was prithvi’s first release this year. The film was almost fully shot in London. But the film was an utter failure at the box office and did nothing good to Prithvi raj as an actor and star. But it was dubbed in telugu as ‘Love in London’ and it was a success there.

7th day
Eventhough he began this year on a rather low note, his next release was a super hit. It was ‘7th day’ directed by debutant Shyamdhar and scripted by another debutant Akhilesh Paul. 7th day become a great success along with Ring master in the vishu season of 2014.

Munnariyippu
His next release was Munnariyippu directed by Venu and the laed role was done by none other than Mammootty. Prithvi just played a little cameo in that film. Eventhough the film has got great critical appreciatiom, it does not made much impact in the box office.

Sapthamshree Thaskaraha
Prithvi’s Onam release was Sapthamasree Thaskaraha directed by Anil Radhakrisnan Menon,and produced by prithvi himself . It had clearly become the Onam winner among all the Super star films pulling back Universal star Mohanlal’s Peruchazhi to the second place and Mega star Mammootty’s Rajadhi Raja to the third.

Tamar Padar
His next release was in October which was ‘Tamar Padar’ and it was the directorial debut of Script writer Dileesh nair. The film was failed miserably at the box office eventhough prithvi had high hopes on it.

Kaviya Thalaivan
The masterpiece from Prithvi just came at the end of this year. Yes, it was Kaviyathalaivan, a tamil film directed by national award winning director Vasantha balan has made such an impact that it gave prithvi lots of appreciation as an actor and film also doing great at the box office.

Thus he had able to end 2014 on a high note. He had some great releases lined up in 2015 as Picket 43 by Major Ravi and Double barrel by Lijo Jose Pellissery is on the post production stage. We wish him all the very best to continue his great run in the coming year too.