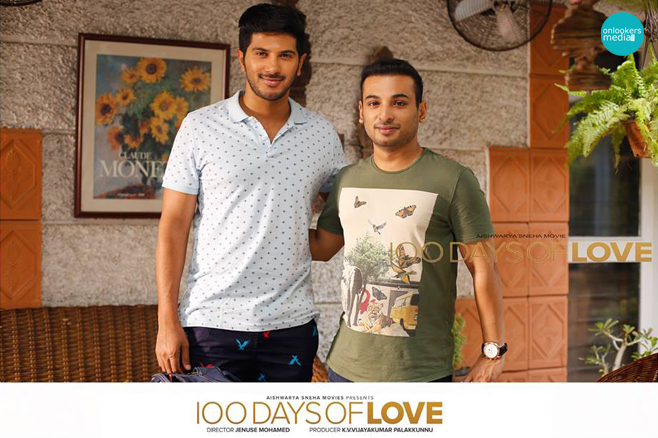 As indicated by the name, the movie fits into the category of romance. Dulquer Salman appears in the movie as a column writer who lives in Bangalore with his best friend played by Sekhar Menon.  He meets a girl while having a day out with his best friend.  He seems to take an inexplicable interest in the girl about whom he hardly knows anything. This creates an uneasy feeling of curiosity in his mind. The movie describes the hundred days of his life after their first meeting and how they become friends which later pave way for the love. There is an element of suspense hidden in the movie as it gradually unfolds the different aspects Nithya Menon’s character.

Dulquer Salman and Nithya Menon worked in Bangalore Days together though they were not paired opposite each other in the movie.  This may come as a shock to some fans but Vineeth allegedly plays father to Nithya in the movie which is a daring step from Vineeth. Bangalore is an important factor of the movie as it serves as the driving force for  most of the writings  by the protagonist ( Dulquer Salman). It depicts the life in Bangalore realistically without relying on any forms of exaggeration. While one may tend to compare the movie with another Bangalore based movie Bangalore Days which also had Bangalore as the background, both movies are in opposite zones when it comes to plot.

Jenuse Mohammad has willingly doubled his challenge by taking the script work of the movie in his own hands which is a true sign of his innate talent.  Govind Menon will compose the music if the movie while Santhosh Varma, Vibin Ram and Rafeeq Ahammed pens down the lyrics. Pratheesh Varma will take care of Cinematography and the editing department will be managed by Sandeep Kumar. Shafeer Sait and KV Vijaykumar Palakunnu will join hands to produce the movie under Aishwarya Banners. Jenuse Mohammad commented that his father has been a source of inspiration throughout the making of the movie.  He also said directing a movie is a dream comes true moment for him.We will have to wait till November to see how his dream pays him off since the movie is planned for a November release