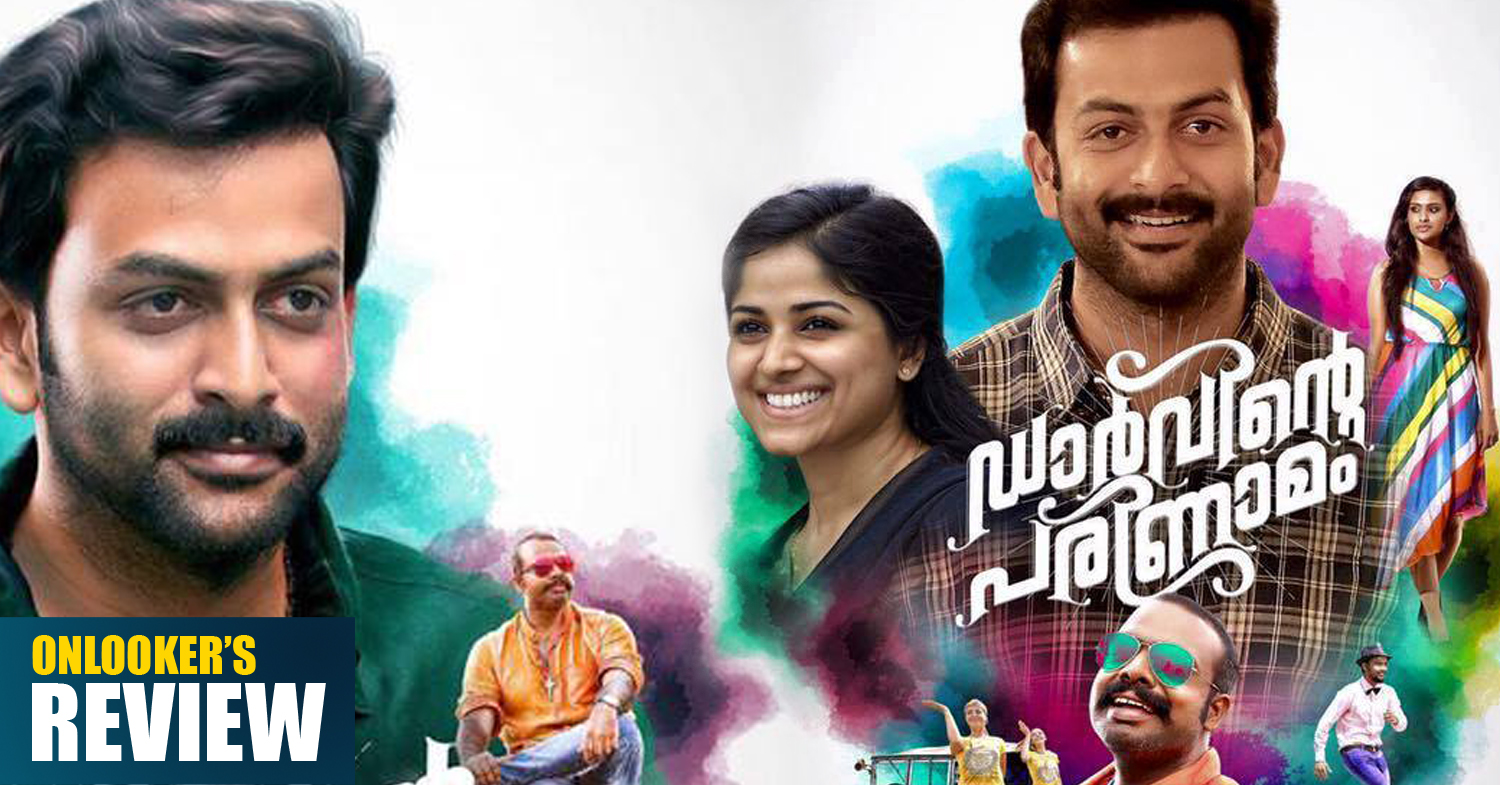 Darvinte Parinamam is the bigest release in Mollywood this week. The film starring Prithviraj Sukumaran and directed by Jijo Antony had raised great anticipation among the viewers with its title and the recently released trailer. Prithviraj who is having a dream run at box office with 4 consecutive successes will look forward to continue that success with this one and that trust on Prithviraj’s selection of films is the biggest anticipation factor for this film either. Apart from that Prithviraj had produced this film under the banner of August films which owned by him, Arya, Santhosh Sivan and Shaji Nadeshan.

The title character of Darvin is played by Chemban Vinod and the evolution of Darvin is the central theme of the film. But the central character is played by Prithviraj and his name is Anil Anto. The film shows how Anil Anto becomes instrumental in the so called evolution of Darvin. The film begins with the introduction of Gorilla Darvin played by Chemban Vinod. Then we are introduced to his gang and activities. Later Anil Anto comes to the scene. He had to leave his house with his pregnant wife after picking up a quarrel with his own mother. He comes from Kottarakkara to Kochi. While he comes to a normal track of smooth life, an unfortunate incident from the gang of Darvin happens with his wife and that makes Darvin and Anil Anto come face to face and the film follows Anil’s revenge upon Darvin.

We have to say that Jijo Antony succeeded in presenting us something different and fresh. He told a revenge story in a novel way and that itself caught the attention of the audience. Manoj Nair and Jijo Antony had written the screenplay together and they had done a good job with that as well. The comic numbers were received with applause and emotional content was appealing all together . The way in which they presented the revenge of Anil Anto is something very fresh and that is really the highlight of the film and which makes the audience enjoy it. The low point in the screenplay was that they failed to carry the emotional appeal that made the first half strong, to the second half. It may make the audience fell that some incidents in the first was irrelevant.

The performance from the cast is the real positive in this movie. Prithviraj as usual sizzled in his new avatar Anil Anto. He displayed tremendous amount of control while playing Anil. He was looking cool and at the same time dynamic at many parts. The emotional scenes really showed his talent as an actor again. He was looking very handsome in this film like his previous appeareances. Chemban Vinod had definitely played one of his best characters in his career, as he had given a sterling show as Gorilla Darvin. Each dialogue of him was received with great applause by the audience and it shows how much this actor had conquered the heart of the viewers.

But the real show stealer was Shammy Thilakan. He had really rocked with his funny character named Ayyappan. Soubin Shaheer, Dharmajan, Kanaran Harish etc also done their part very well. Chandini Sreedharan was also given a matured performance even though she does not have a great scope in this film to show her skills. But her chemistry with Prithviraj was very good. Balu Varghese, Pradeep Kottayam etc was also at their usual best when it comes to the performance level. Shankar Sharma’s music was very good and it really went well with mood created in the film.

Abinandam Ramanujan is known for his beautiful frames and but have to say that in this film he is definitely not given his best. There were some problems somewhere with the color tone and all that in the film. Editing was also not very impressive as the transition from one scene to another looked shabby at places. If they took care of the technical side a little bit more, it could have been made the film a grand one.

On the whole if we say, Darvinte Parinamam is a onetime watchable entertainer which will make you sit through without make you yawn at the theater. It looks like Prithviraj will continue his winning streak with this one either.