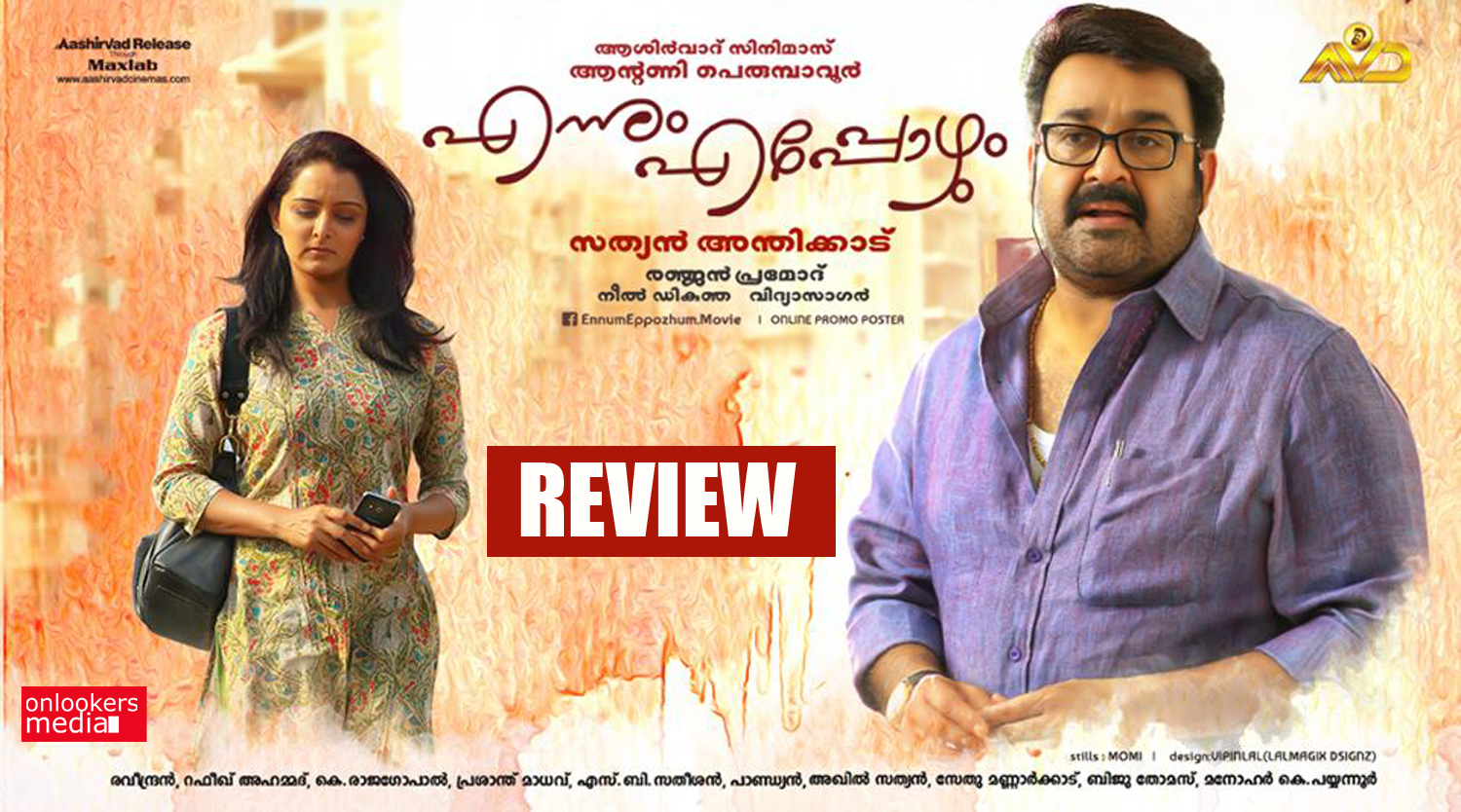 Ennum Eppozhum it means Forever Always and the title really looks perfect after we watched the film. It has been an eagerly awaited movie for quite a time and when it came today it really delivered the goods with dignity and class. A film for all to keep in their memories forever always as the title tells. The film is conceived by none other than the director who touched the heart of Malayalees with his soulful films and you all know who is that director is. Yes, it is none other than Sathyan Anthikkad.

He is always been the director who had got the support of families and every family trusts him a lot while they chose to watch a film in theater. If there is a sathyan anthikkad film , then no doubt that family audience will prefer him more than anyone. This time he is back with his most favourite actor and it is the actor-director pair which gave us classics. It is Mohanlal, the most complete actor in Indian cinema history and the one who rules mollywood with his out of the world crowd pulling capacity and indescribable skills of acting.

The film tells a simple tale and nothing complicated. The story revolves around Vineeth N Pillai, a staff reporter of Vanitha Ratnam family Magazine and his attempts to get an interview from Deepa, a noted advocate. During his efforts to get that interview from her he really began to involve in her life indirectly and there happens a bond between them. It tells the life of our common man and Renjan pramod had given tiny details which is very relevant in our society today. Raveendran who wrote the story really made a simple but perfect one for Sathyan Anthikad- Mohanlal and Manju Warrier team to come up with.

Ennum Eppozhum is good to go for family audiences during this summer . The highlight of the film is the stunning performances of Mohanlal and Manju Warrier and also the script by Renjan Pramod. Another star who may you wont get noticed much is Raveendran ( Disco Raveendran ) who wrote the story of Ennum Eppozhum. Mohanlal was just awesome as he reminds us of the Mohanlal of the 90’s with expressions, energy and comedy numbers. He is just perfect or can be called as a complete package of entertainment. His dialogue delivery, funny expressions and the performance of him in the emotional scenes of the film makes us once again realize that there is no one in mollywood to compete with him in pure talent, skill and in naturality of acting. He is that much perfect in each and every minute details of the character named Vineeth N Pillai.

Manju had made a great comeback last year and she continues to deliver the same grace and done the character named Deepa with Elan. When two great artists compete with each other on screen to make the characters perfect we can’t ask for more. The surprise package in the film was none other than actor/writer/director Renji Panicker who got the appreciation of audience with his unusual comedy numbers. Vidyasagar’s music suits the situations up to an extend. Neil D Cunha’s DOP gave a fresh feel to the film as well. Ennum Eppozhum is a total family entertainer with lots of fun, great music, simple but beautiful story and we can say that this is the pure Malayalam cinema we want to watch irrespective of any generation differences.