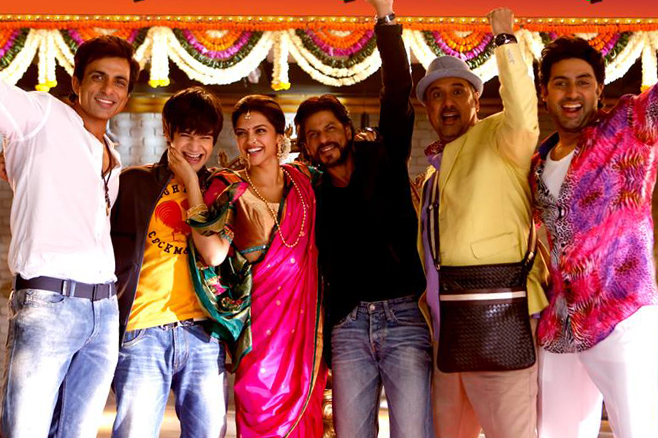 It is hard not to get vibes of excitement when it comes to Shahrukh Khan Movies. Happy New Year can be rightfully considered as his Diwali present to the fans. The movie is about Chandramohan Sharma aka Charlie (Shah Rukh Khan) who has a haunted past. His father had committed suicide after being accused of robbery. Later Charlie realizes that the case against father was fabricated by Charan Grover (played by Jackie Shroff) and from then on, Charlie’s mission of life is to avenge his father by destroying the life of Charan.  Charlie comes to know about certain diamonds which is now in the possession of Charan Grower.  He also learns that the diamonds are under high protection in Dubai.

Charlie makes the decision to get hold of the diamonds and spends time in devising a perfect plan for that. He knows that he will not be able to do it all by himself therefore he approaches a bunch of others to accompany him in the mission.  They are Jag (played by Sonu Sood), Tammy (played by Boman Irani) and Rohan (played by Vivaan Shah). They realize that they will need Charan’s son Vikki (played by Abhishek Bachan) to get diamonds. But to his luck, Charlie finds a man named Nandu who looks exactly like Vikki and he becomes a part of the team.

They are informed about the world dance competition which will endow them with a perfect opportunity to implement their plans. But the biggest problem is that they are not very good at dance and has little to no hope to make it to the competition on their own. Therefore, they seek the help of Mohini (played by Deepika Padukone) who works in a bar as a dancer. She agrees to teach them and they enter into the competition as the representatives of India. A series of interesting events that takes place during the competition gives the backbone to the story.

The combination of Shahrukh Khan and Farah Khan has always successful in producing audience pleasing movies.  It is difficult to answer if Happy New Year is good enough to be included in this category. The film is equidistant from being a good entertainer and a glorious demonstration of an unrealistic story.  It shows traces of artistry but it loses its steam at some points. It does have some moments which may leave the audience open mouthed but  it feels too far away from reality.

The story of the movie deals with the overused subject of revenge. The movie is not dull in the sense that Farah has made the film as colorful as she can with numerous song-dance sequences and interesting hi-tech robbery scenes. The movie is exceedingly dependent on Shahrukh Khan. However, Shahrukh Khan is too familiar with these situations and handles it properly in the movie.  He remains the high point throughout the movie. Deepika Padukone gives an excellent performance as a devil may care girl. Abhishek Bachchan is one of the characters in the movie that create genuine laughs in the movie. The performances from the other cast are also satisfactory. Altogether; Happy New Year is an average movie with some high and low points.