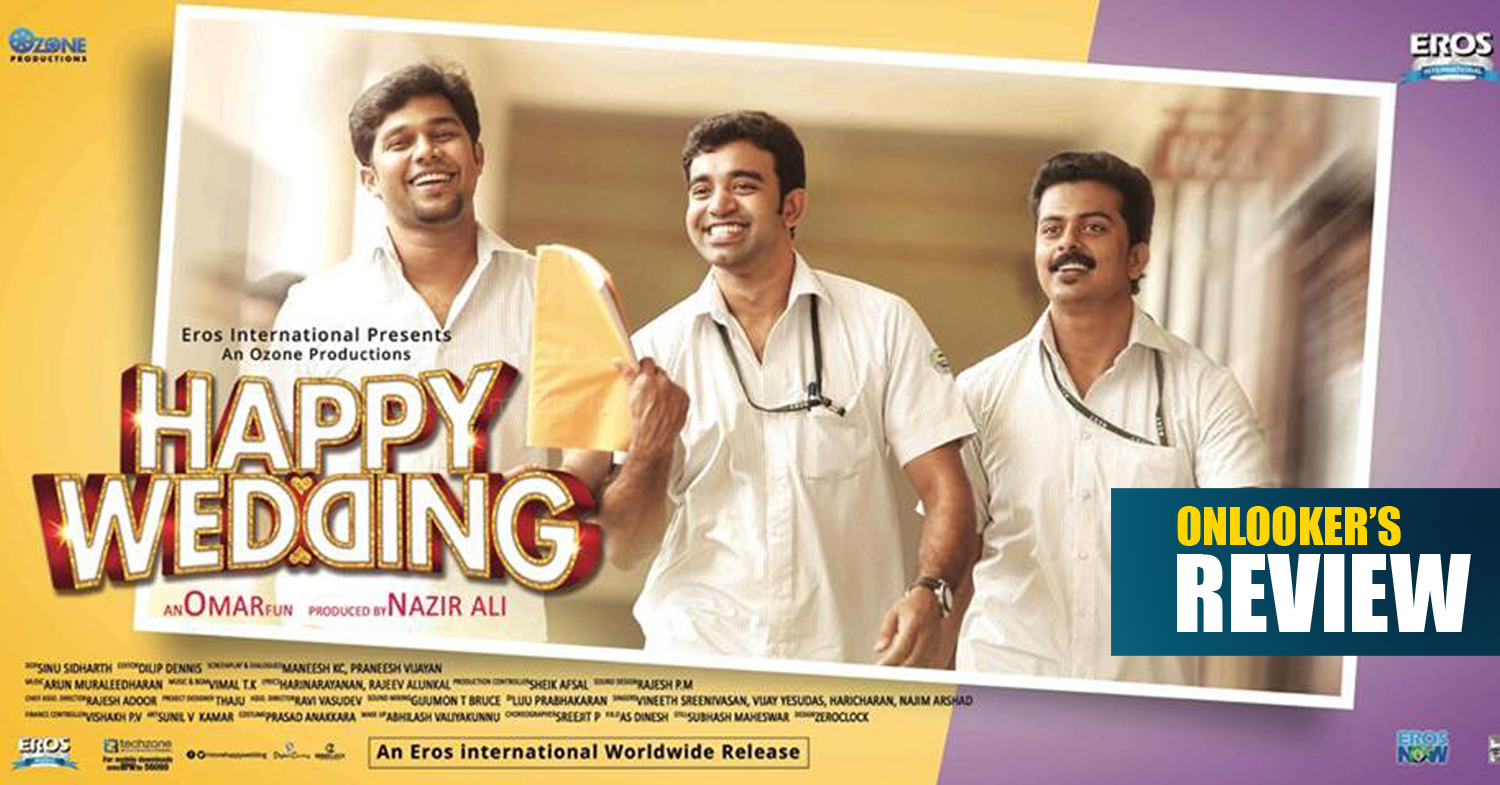 Happy Wedding, the Malayalam movie which released on May 20 has come from a young team. The film is directed by debutant Omar and screenplay is written by Sandeep Mundoor. KC Maneesh and Praneesh Vijayan had wrote the dialogues for this flick. The film got the attention from the audience due to its star cast first. The major characters in this film is played by Siju Wilson, Sharafudeen, Soubin Shahir, Justin etc and they are very familier to Malayali audience through the blockbuster film Premam. Eros International had distributed this film all over Kerala and the flick has been produced by Nazir Ali.

The plot of the film revolves around a group of friends played by Siju Wilson, Sharafudeen, Justin, Soubin Shahir etc. Harikrishnan, played by Siju Wilson is the central character of this movie. He is a civil engineer and the film opens with his efforts to propose a girl with whom he is working. His cousin Manu Krishnan played by Sharafudeen is always with him and he is a playboy kind of character as well. The film shows us Hari’s efforts to make his love story success with the help of his friends and also gives us the glimpse of what happened in his college life when the character played by Soubin Shahir appears on screen, who is a motivation speaker.

We have to say that this debutant Omar had given a fantastic entertainer for the youngsters here in Kerala. The film is a hilarious one and it’s a laugh riot to say the least. Each and every scene in this movie is filled with some comedy or the other and the director had made a fabulous effort to make each and every part of the movie interesting. The dialogues were the highlight of this film as each and every oneliners making the audience to laugh their heart out. The college life and the incidents at college was shot superbly and the screenplay was an interesting one as well with superb situations to create romance and comedy.

Performance from artists was the backbone of this film. Siju Wilson had done a great job as Hari who is lover boy or Prema Rogi in the language of Manu Krishnan, his cousin. He looked promising in comedy and romance as he performed each scene with a cool head. Sharafudeen was the real show stealer of this flick as he got great applause from the audience every time he opened his mouth to say the least. His counter punches and oneliners were so hilarious and natural. He just created laugh in the cinema hall with his mere looks and smile at places.

Soubin Shahir was the another great performer in this film. Artists like Justin, Abi, Anu Sithara, Sudhi Koppa, Saiju Kuruppu, Kalabhavan Niaz, Ambika Mohan, Thesni Khan, Sivaji Guruvayoor, Vinod Kovoor etc also did a great job in this flick. Specially, in a scene in the low floor KSRTC bus, Saiju Kuruppu, Kalabhaavan Niaz, Soubin Shahir, Siju Wilson and Sharafudeen was at their comic best. Arun Muraleedharan’s songs were decent and Vimal TK had given great background score for the film. Sinu Sidharth also given decent visuals for this romantic-comedy.

Happy Wedding is an absolute fun film which will make you relax to the core. This will make you laugh your heart out in the theaters and you will feel more lighter when you come out from the cinema halls. As the title suggests, it’s like a happy celebration of love and fun. Just enjoy it with your friends.