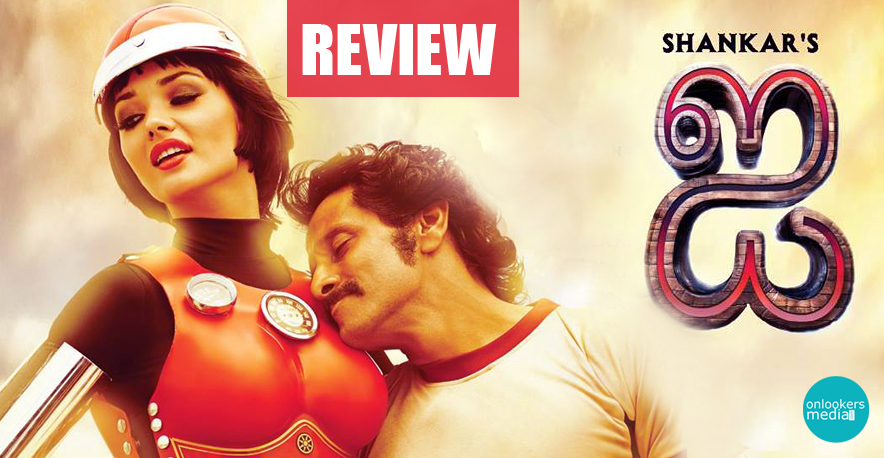 I, the magnum opus of Show man Shankar at last hit the screens today and being the biggest ever film in his and actor Vikram’s career it has generated hell of a lot expectation among the viewers who waited for it for more than 3 years. But is it raised up to the expectation level? That is the question we need to answer to the public who gives value to our opinion. Frankly saying, it is a big “no” from our side as the answer of the above question. Then we know the next question in your mind. What makes us to say like this..?..Well, the answer to that question is to be explained a little bit.

Ideals with a story of love and revenge. May be we can say that on old wine in a new bottle type of concept. It is the story of how the Tamilnadu Body builder Lingesan turn into a Hunchback who is wandering with a mind to take revenge. How Lingeshan becomes the super model Lee and who is helping him and who is betraying him with love and friendship.

We are not delving much deep into the story as it will be a spoiler for those who did not watched it yet and for those who want to watch it irrespective of our final review. If we have to find the plus points in the film, we have to say it only about the actors. Vikram was just brilliant and his transition from one character to another was the highlight of the film and that is what Ai is all out arguably. Any Jackson was looking gorgeous and her chemistry with Vikram was stupendous. Suresh Gopi do not have great screen space but his character have the power and he just did his best for the role he got.

Now the negatives have to be told to you as well. Yes, as you guessed there is a lot to tell. First and the most negative part of the film was its script and direction by Shankar himself. A  really predictable story which takes forward the spectator to a rather predictable climax. The narration was mixed with past and present events and the 186 minute length makes the audience to search for any thrills in the film himself. The lip synchronization of the characters of Diya (Amy Jackson) and John (Upan Patel) was horrible to say the least.

P C sreeram’s DOP was like sea waves. Sometimes it is went to high quality which gava a real visual treat and sometimes it went to that low that it looks terrible in terms of the visual clarity. A R Rahman’s songs were not up to the mark and his magic seems to be on the decline. It just seems that Shanker had only tried to give some good visuals and included some advertisements for some popular brands through the visuals.

Anyway it was only for the performance of Vikram and other actors especially Suresh Gopi and a Surprise performance from Mohan kapoor that the film stands to an average level. When we consider the waiting, the hype, the expectation and the hope on the highly talented technicians like Shankar, I was a disappointment. But if you can (?) go and watch it without all the earlier mentioned conditions, then you can enjoy the film as a usual Taamil festival flick and nothing more than that.