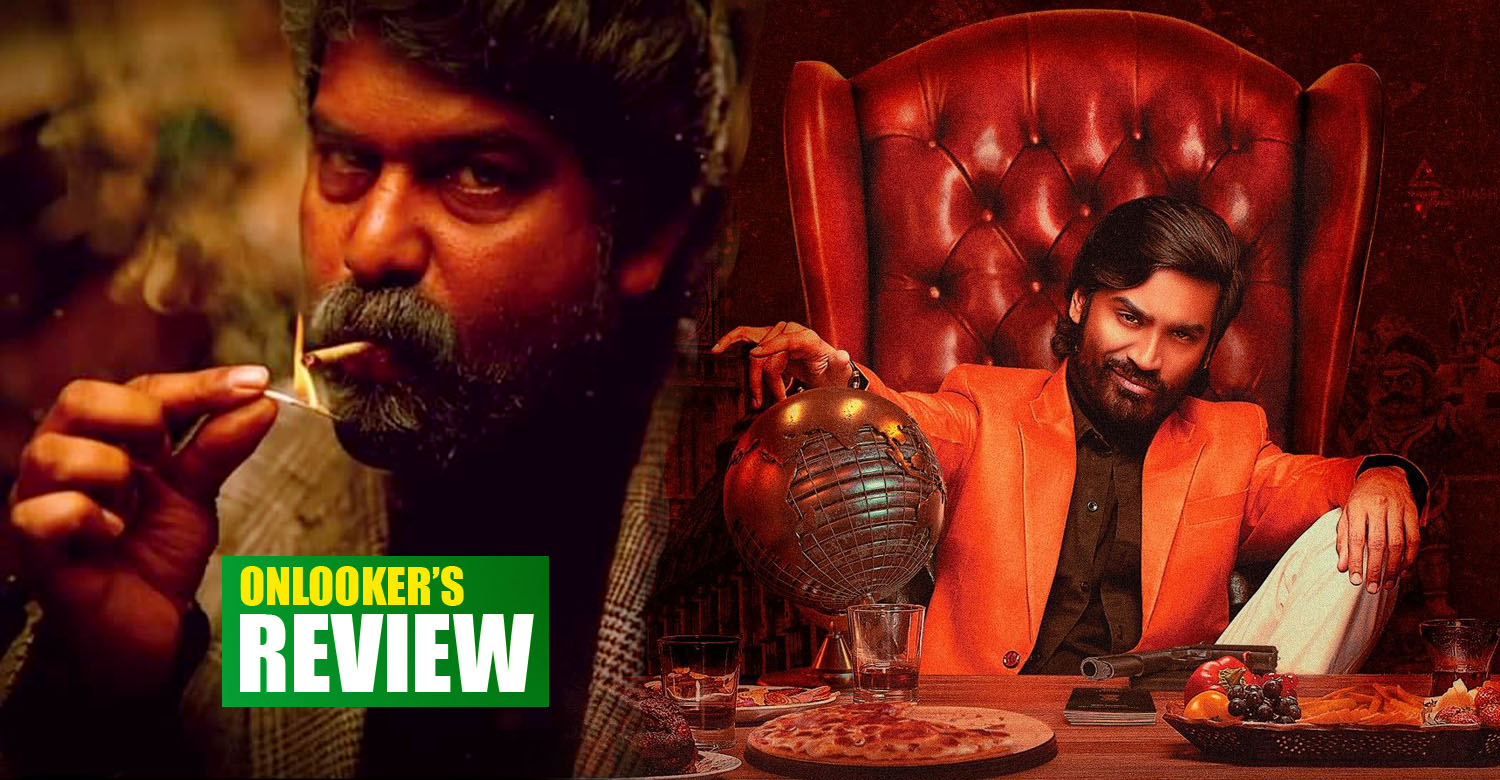 ‘Jagame Thandhiram’ begins with a group of immigrants getting arrested for unlawfully entering restricted waters near the UK border. From there, the film cuts to a clash between two groups in London, who are involved in arms trade. One is headed by Peter, a powerful gangster who wants to wipe out the immigrants and the other lead by Sivadoss, a Sri Lankan Tamilian who works for the welfare of the immigrants. Then there’s Suruli, a small-time thug far away in Madurai.

The narrative is mainly centred around these three characters. Some bizzare events land Suruli amidst the long-standing Peter-Sivadoss rivalry and he plays his tricks smartly to earn some quick money. It is only after a particular point that Suruli learns that he has ended up in something bigger than what he ever thought of. How he manages to resolve it and come out of it forms the rest of the plot.

Dhanush as Suruli is the life of this film. The actor is at his energetic best as he gets the Madurai dialect and body-language perfectly. ‘Jagame Thandhiram’ has a heavy hangover of Karthik Subbaraj’s previous gangster films. Suruli is almost cut from the same cloth as Petta Velan. Even the moustache is retained as such. Some scenes also bring back memories of Assault Sethu from ‘Jigarthanda’. It is safe to say that all three are from the same Madurai-gangster universe created by Subbaraj. There is also the evident Tarantino-esquness, which includes the quirkiness of the gangsters, homages to old films and songs, stylized action and dark humour. Apart from being just a regular gangster film with plenty of blood and gunshots, Subbaraj has also tried to address the refugee crisis with ‘Jagame Thandhiram’. All these are noble intentions but the director has faltered with the execution. While he tried to focus on getting the politics right, the film fails to keep the viewers engaged. Right from the situations that land Suruli in London and how he cracks the operations by Sivadoss’ gang, things appear too silly and convenient, which are examples of lazy writing.

One can clearly see that ‘Jagame Thandhiram’ is designed for a theatrical experience. The ‘mass’ build-ups and stylized slo-mo shots accompanied by Santhosh Narayanan’s exhilarating score would have been great fun to watch in theatres. Unfortunately, you don’t get the same during an OTT watch and that has clearly backfired for the film.

Joju George as Sivadoss is impressive as he fits in convincingly for the role with his commanding demeanour. If only the character was sketched better with more nuances and ample screen time, it would have had a lasting impact. The Scottish actor John Cosmo has delivered an excellent performance playing the antagonist, Peter. Took special liking to the way he pulled of this character — he is a ruthless white supremacist who doesn’t bat an eye lid when it comes to slashing throats. He is also seen casually dancing on the streets and incredibly passionate about football. But one would have expected a highly influential gangster like him to be a bit more smart and brainy. Aishwarya Lekshmi also gets a meaty role as Atilla and she has preformed well in the emotional scenes. Standing up against a powerhouse of a performer like Dhanush, the actress still manages to hold her ground. However, their relationship track just doesn’t work as there is absolutely no depth in it.
The flashback she narrates is the realization point but from there, it all happens little too quickly and conveniently. The sufferings of the refugees and the Eelam Tamils are not given much importance and subsequently the emotional connect goes missing.One cannot help but wonder if Subbaraj was running out of ideas to make the third act gripping. He seems to have relied more on Dhanush’s charisma and screen presence.

So in a nutshell, Jagame Thandhiram is a mixed bag. It has his moments but not the consistency. It has style not enough substance. It is Dhanush who tries his best to keep the boat afloat.