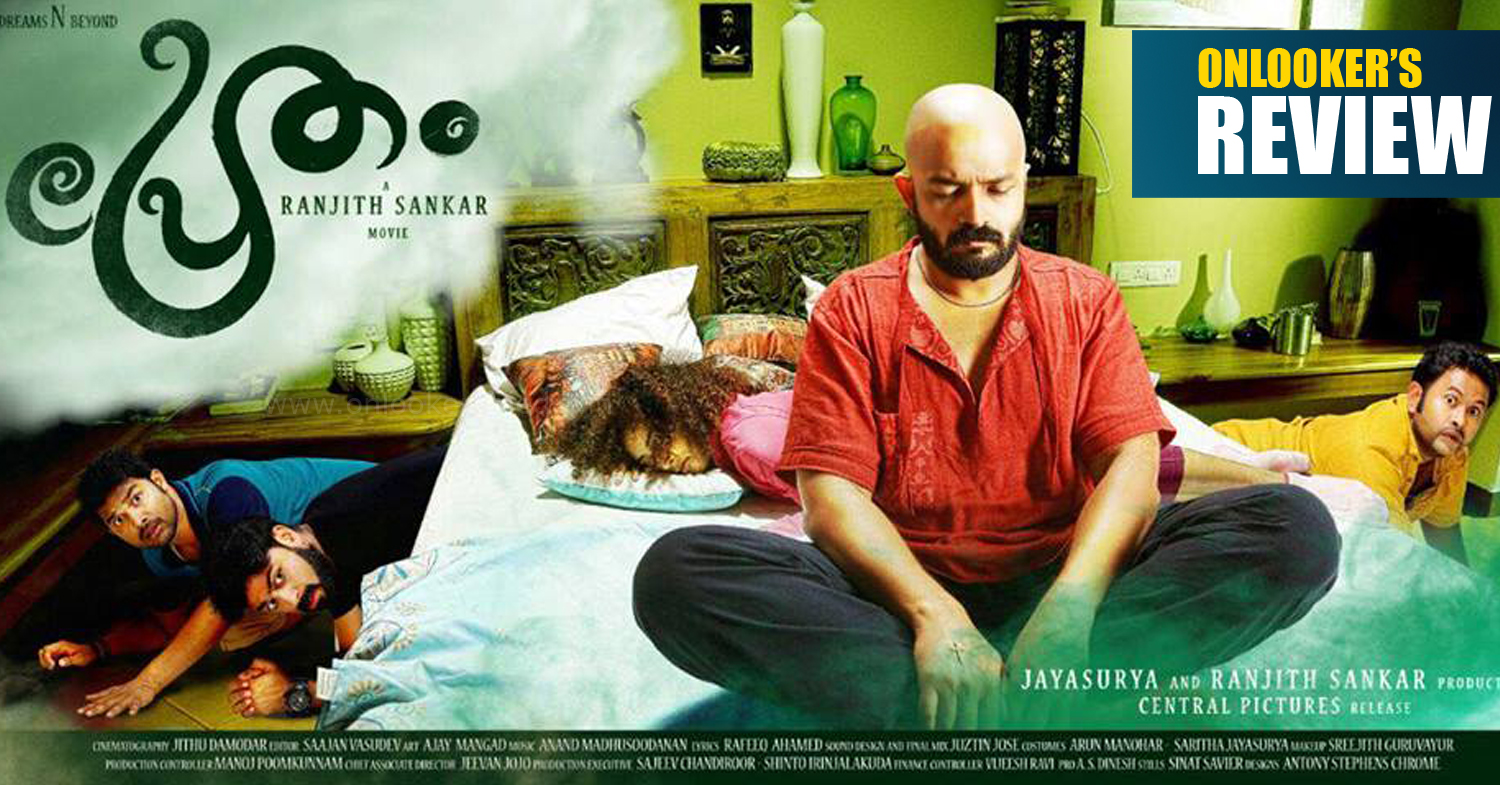 A Malayalam horror movie had come to grace the screen here today. We usually watches Hollywood horror movies like conjuring, Insidious etc and praises them a lot. So, for a welcome change, Malayalam horror film named Pretham had released here. This film by Ranjith Sankar, starring Jayasurya did not made much pre-release hype. The only factor that made created some anticipation level for the movie is that it is a Ranjith Sankar-Jayasurya flick.

The plot of the movie revolves around 3 friends and a mentalist. 3 friends named Denni, Priyan and Shibu played by Aju Varghese, Sharafudheen and Govind Padmasurya buys a beach resort. But some super natural experiences awaited them there. At first they goes to a priest played by a priest (Hareesh Perady) for help. But that did not yield any good result for them. Then comes John Don Bosco played by Jayasurya in to their life, who is a mentalist by profession. The film shows the effort of John Don Bosco to find out the truth behind the super natural experiences at that beach resort.

First of all it have to be mentioned that this movie never had the clichés of usual horror movies in it, regarding the appearance and behavior pattern of the super natural force. From the beginning of the movie itself, it offers great entertainment through many humorous moments and given us some terrific horror scenes. The movies showed a clear purpose right from the start and the director was always in control over the proceedings.

In his earlier movies like Su Su Sudhi Vathmeekam and Varsham, Ranjith Sankar had some slip ups regarding the full control over the narration. It felt like he was losing the grip at parts. But in this film, he really showed his craft as a director. The introduction of a Mentalist as the protagonist itself was a great move by the director and that itself gave a unique feel to the movie. The dialogues were hilarious and the one liners from Sharafudheen and Aju Varghese were just superb. The situations in the movie was very much convincing to the audience and at many parts the writer/director was able to make logical explanations. The movie maintained a very good pace and the right mix of horror and comedy scenes really made the audience to sit the edge of their seats.

Jayasurya’s performance as John Don Bosco was the highlight this film. He had once again given a quality performance and now-a-days he had become a master in controlled acting. He was very natural and subtle in his performance. Aju Varghese, Sharafudheen, Govind Padmasoorya etc also done a great job and they showed great onscreen chemistry. Pearle Maaney, Hareesh Perady, Dharmajan Vijay Babu, Devan, Sunil Sugatha etc also did a very good job.

Jithu Damodar’s DOP was very good and some of the frames he created was terrific as well. But at some parts the focus out seems to be an issue and it made the visuals a bit jerky. Anand Madusoodanan’s music was really good. The background scoring was awesome as well. The major highlight in the technical side was the sound design by Justin Jose. He gave a terrific output and it really enhanced the effect of the horror scenes in the movie. Editing was done by Sajan Vasudev and his crisp cuts made the film too move forward in a perfect flow.

In total, Pretham will be a very good movie experience for you. It has something different in it as a horror comedy and it will be the one which make you thoroughly enjoyed.