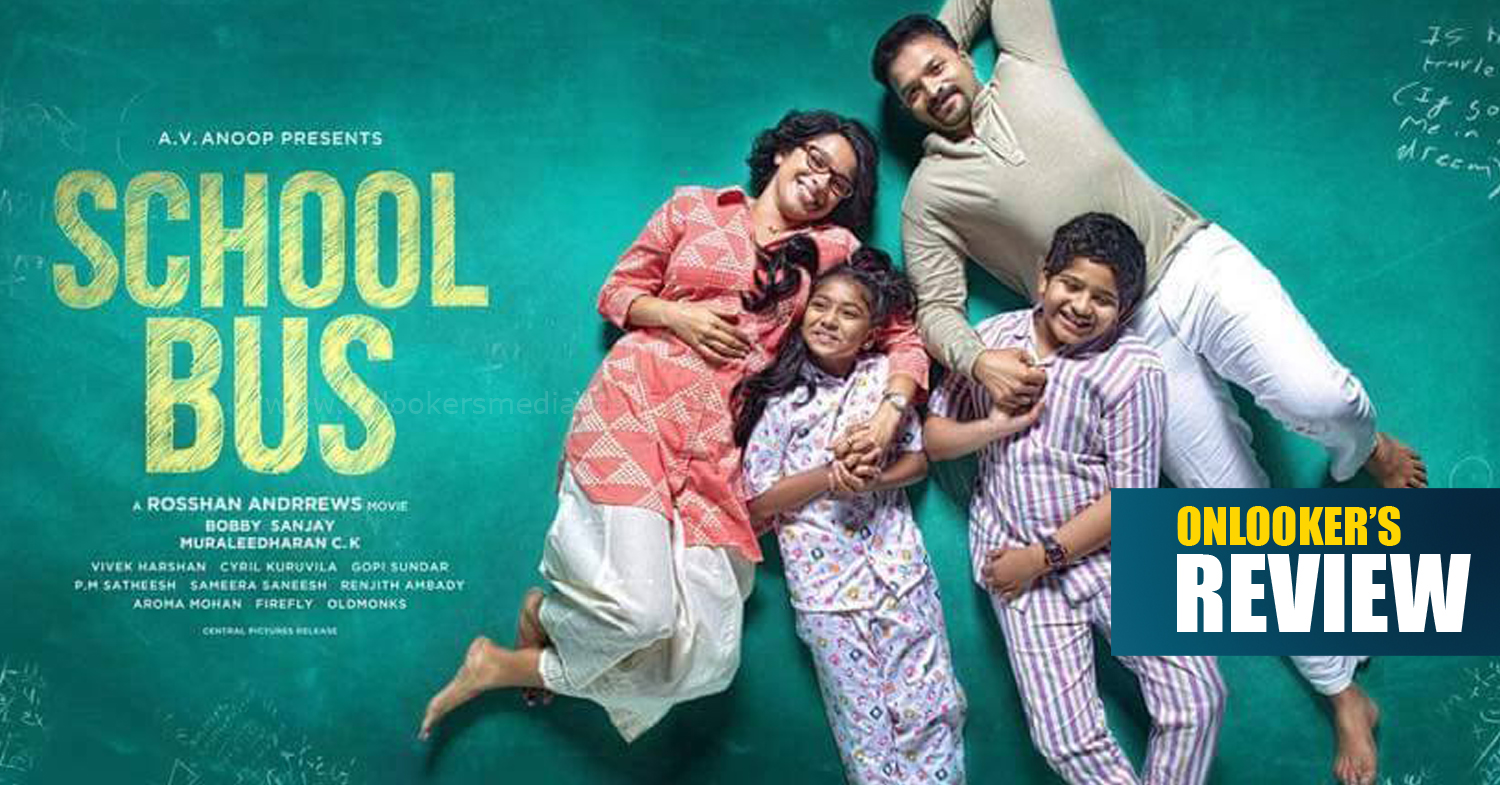 School Bus is the major release this Friday in Mollywood. This flick has been directed by none other than popular director Roshan Andrews and written by the most popular script writing duo in Kerala now, Bobby Sanjay. Kunchacko Boban and Jayasurya playing the lead characters in this movie which has artists like Aparna Gopinath, Aakash Muraleedharan (child artist) and Angelina Roshan (Child artist) etc as well. Angelina Roshan is the daughter of director Roshan Andrews and she is playing the major character in this film along with Aakash Muraleedharan. School Bus is produced by AV Anoop under his banner of AVA Productions and it is distributed here by Central pictures.

The plot of the film revolves around the characters named Ajoy, Angelina, Gopakumar, Joseph and Aparnna played by Aakash, Angelina, Kunchacko Boban, Jayasurya, Aparna Gopinath respectively. Gopa Kumar is a Sub Inspector and Joseph is a sales executive. He is a very strict father as well. The story begins with showing the life of the family of joseph. Ajoy and Angelina are his children. One day Ajoy creates a problem in school and one boy was admitted in hospital. To escape from punishment from parents and teachers, both Ajoy and Angelina begins to bunk school. There the story takes off.

We have to say that Roshan Andrews had again came up with a superb cinematic experience. We all know what he is capable of as a director. He once again showed the quality he has when it comes to the narration of a story. School Bus is a completely different film from him. It is a family subject and at the same time a thriller as well. He narrated the story from the perspective of the children and never lost his grip on the proceedings. He kept it simple and at the same time never let the intensity of the plot down.

Screenplay by Bobby and Sanjay once again contributed big time to the success of Roshan Andrews as a director. The chemistry between the writers and director was evident in the film. Each characters were given their own clear identity and each situation was logical and convincing for the viewer. The dialogues also were very natural as for most part children took the center stage. When it comes to the side of the performance from artists we have to say that the two children, Aakash and Angelina had given a fabulous performance. They really given a cool performance and never let the artificiality to come in to their dialogue delivery and movements.

Kunchacko Boban was as usual given a very good performance and Jayasurya once again showed us the growth he had as an actor. He had given a really matured performance as Joseph. Aparna Gopinath did her part neatly as well. The technical side was superb as well. CK Muraleedharan is known for his works in Bollywood films like PK and 3 idiots. He had made his debut here in Mollywood superb. The visuals were fabulous and really captured the atmosphere of the plot with his frames. Gopi Sundar’s music and Vivek Harshan’s Editing also become the plus points for this movie as both had did a fine job. Specially, the background scoring by Gopi sundar was very good.

In total, School Bus is class thriller for families. It conveys a message as well for the parents and it will never let you down as a visual experience as well.