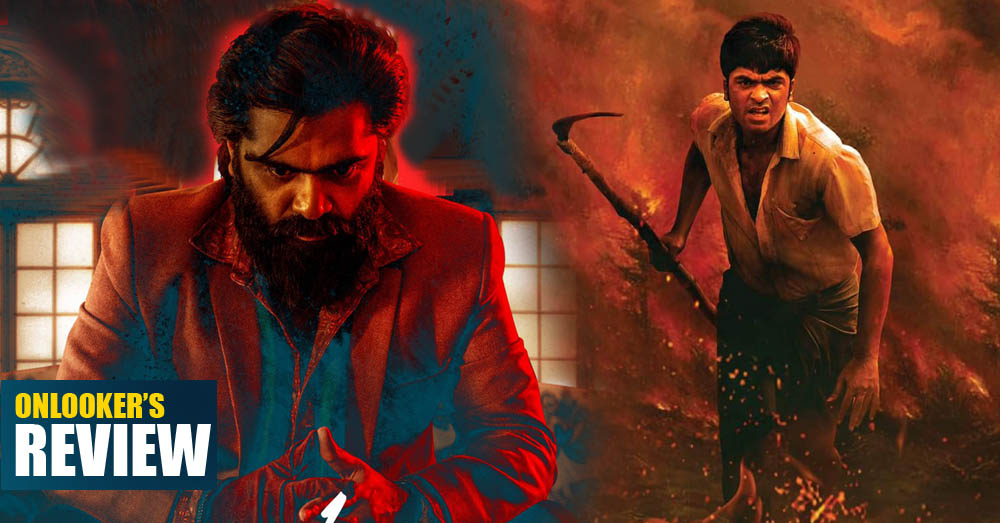 After the blockbuster ‘Vinnai Thaandi Varuvaaya’ and the forgettable ‘Achcham Yenbathu Madamaiyada’, the trio of Simbu, Gautham Menon and AR Rahman are back for the third time. This time a gangster drama. ‘Vendhu Thanindhathu Kaadu’ starts off anything unlike a GVM film. It begins in a rural setting where Simbu is seen working in a field covered with thorny bushes. A moment of negligence, and the entire field is set ablaze. We learn that Simbu’a character Muthu is a BSC graduate who finds it hard to get a job. The fire accident at the field incurrs him a huge debt and his mother decides to send him off to Mumbai with the help of a relative. In Mumbai, Muthu is part of a group of gangsters working in disguise in a hotel.

It’s the familiar dark underbelly where gang wars and killings are a common sight. After slowly establishing the world and Muthu’s reluctance to be a part of it, we reach the interval block. It’s a killer single-shot stretch at the end of which Muthu goes on a rampage against the rival gang. Within no time, he climbs up the ranks and becomes a bodyguard to a powerful gangster. But unlike usual underdog stories, here, the hero doesn’t have power hunger or any other lofty ambitions. He tries escaping this world but something gets him back everytime. Amdist all the action is Muthu’s romantic track with Paavai. However, it turns out to be the weakest link in the film. It is surprising considering the fact that romance has always been good with portraying love stories.

On the performance side, Simbu is excellent as he carries the film on his shoulders efficiently. He shows solid grip over his dialogue delivery and how he transforms his body language transforms throughout the narrative. Neeraj Madhav also impresses with an impactful role. On the technical side, VTK doesn’t have the look and feel of a GVM and its very refreshing. Siddharth Nuni’s cinematography deserves praise for incredibly controlled single shots. AR Rahman brings his A game with this film as his songs and score work brilliantly to lift the film. How he used different iterations of ‘Marakkuma Nenjam’ according to each situation is a work of genius.

‘Vendhu Thanindhathu Kaadu’ is superbly made gangster film that works for most part. It is heartening to see Gautham Menon make a strong comeback and showing what he is capable of. Wish the director had shown worked better on the ending, which fails to give the intended high.