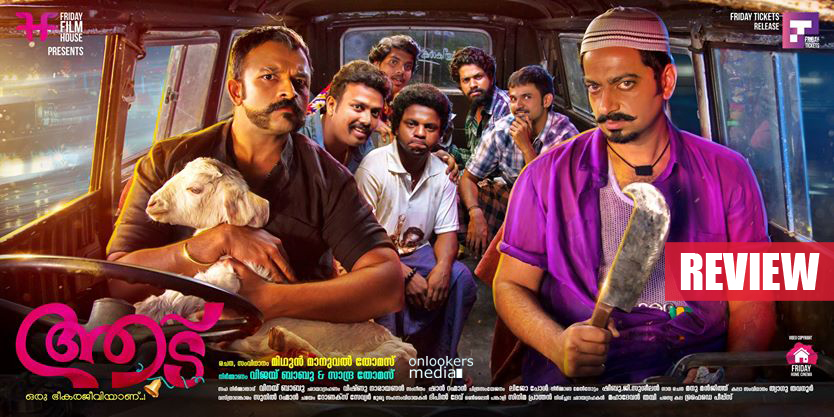 Aadu Oru Bheekara Jeeviyaanu, one of the much awaited film from last year from the day it began its filming. That is for two reasons. One is for the special title and theme of the film in which a she-goat is playing the title character (heroine of the film, as the crew says) and second one is that it is a directorial debut of Midhun Manuel Thomas who showed promise as a writer through his very first film which released last year. It was one of the hits in 2014 named Om Shanti Oshana and the film also was the first step of a young man as a director whose name is Jude Antony Joseph.

In That film Midhun manuvel Thomas told the story in a unique manner and that too a love story. So it is very natural to have high hopes and expectation when the one who wrote such a good film turns director with really a fresh theme. Jayasurya played the lead male role in Aadu and the film also got a number of artists such as Dharamajan Bolgatti, Vinayakan, Vijay Babu, Sandra Thomas, Renji Panikker, Saiju Kuruppu, Chemban Vinod, Indrans, Aju Varghese(guest appearance), Sunny Wayne (guest appearance), Srinda Ashab (guest appearance) to boast of. Shan Rahman composed the music for the film.

And the film got released on February 6, 2015 after much waiting. But it turns out to be a disaster for the spectators. Apart from the title there is nothing in the film to enjoy really. The standard of comedy in the film is one of the poorest in last 2-3 years in Mollywood. The story focuses on the problems Shaji Pappan (Jayasurya) had to encounter when he tried to dispose a she-goat named pinky when he got that animal as a first prize in tug-of-war competition. Some other people come into the story with some political issues and some others in search of a herb named ‘Neela Koduveli’.

In fact the story is moving forward without any direction and wanders here and there without even a purpose. No characters in the film have complete identity and they are just like blabbering what comes to their mind. Music of the film is poor and the background scoring is horrible to say the least. When it comes to the performance we have to say that it was pathetic from all of them. Even jayasurya was not up to the mark as he had nothing to do in the film rather than chewing pan masala and going down unconscious now and then.

Even the goat does not have anything to do in the film quite opposite to the pre-release claim of the crew of the film. On the whole we cannot even find a single positive point in the film and recommend all of you to stay away from theaters running “Aadu Oru Bheekara Jeeviyaanu”. It will do real good to your valuable money, time and even your health.