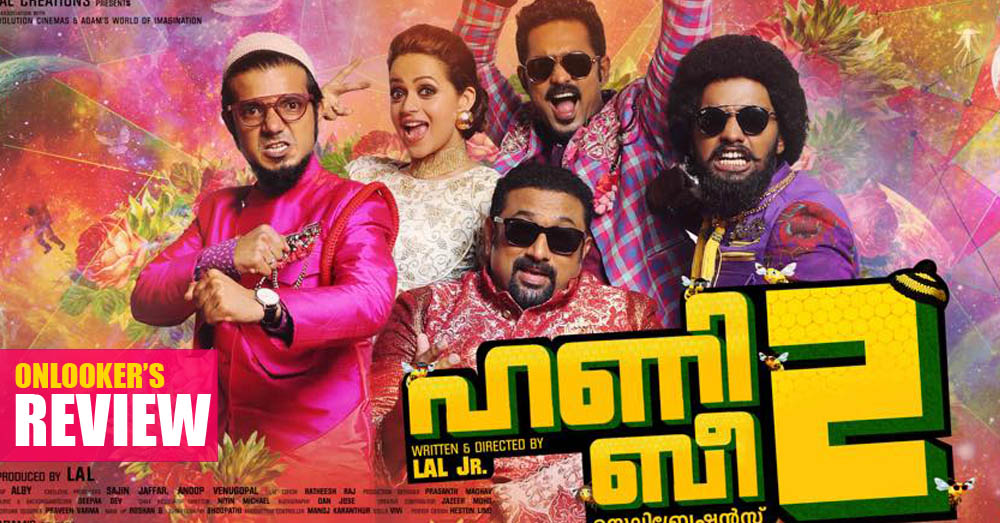 The sequel for 2013 superhit movie Honey Bee has been released today. The first part was a sensational success among the youngsters, let’s see if Honey Bee 2 could repeat the same.

‌The movie begins with Sebastian aka Seban (Asif Ali) and Angel (Bhavana) in the hospital bed after their suicide attempt, which was shown in the first part. The Punyalan family accept their relationship and wave the green signal for their marriage. However, Seban’s parents, who are advocates settled in Bangalore, won’t accept this marriage. Seban arrived in Kochi years back after personal differences with his parents. Punyalan family decide to approach Seban’s parents with a proposal for an alliance without letting them know that Seban and Angel are already in a relationship. Rest of the plot revolves around their marriage proposal and the issues surrounding it. Honey Bee was targeted majorly at the youngsters and the makers succeeded in turning it into a superhit. So, naturally the sequel came in with high expectations. However, the reality is that Honey Bee 2 could not rise up to the expectations of the audience.

While Honey Bee was an entertaining movie with humour, friendship and efficient making style, the sequel gave more prominence to sentiments which paved way for a lot of dull moments. The screenplay reminded one of Krishna Poojapurra’s with it’s over dose of sentiments and melodrama, thereby teasing the patience of the audience. Honey Bee had was rollicking fun with Sreenath Bhasi, Balu Varghese and Baburaj lighting up the screen. Unfortunately, they were all sidelined this time for some emotional show by Lal and Sreenivasan.

Eventhough, a solid storyline is not necessary for such movies, the director has failed to weave an engaging plot and that itself is the biggest disappointment in the movie. Coming to the performance side, Sreenath Bhasi, Balu Varghese and Baburaj garner the audience applause even though the scope for performance is limited. Asif Ali, Bhavana, Lal, Sreenivasan, Lena have all done justice to their roles. Cinematography, music and editing were all passable with nothing noteworthy. Apart from some goofiness, the movie does not offer anything commendable.

In a nutshell, Honey Bee 2 Celebrations will not satisfy Honey Bee fans or those who expect to watch an entertainer.

C/O Saira Banu review : A commoner’s fight against the law
Take Off Review : A story about the survival of Malayali nurses
To Top