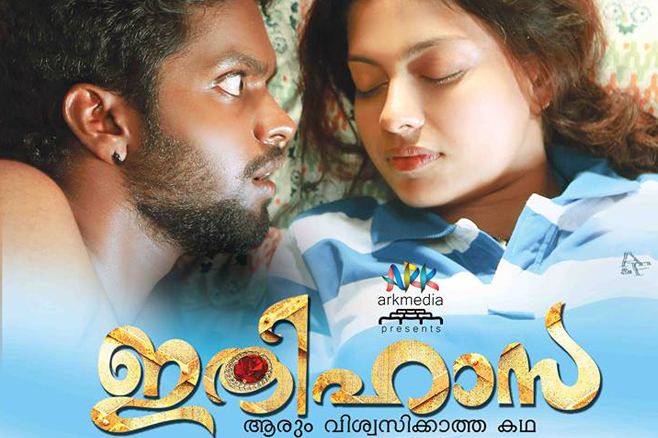 The movie Ithihasa is a new entry to the genre of fantasy. The film marks the debut id the director Binu S. The plot goes like this.   The male protagonist Alby (played by Shine Tom Chacko) is a thief who is happy go lucky person. He has a partner in crime named Vikku (played by Balu Varghese). They are least bothered about their future and their sole priority is to have as much as fun as possible. However, things change slightly when Alby falls in love with Janaki (played by Aushree) who is an IT pofessional. Alby discovers a pair of rings which he and Janaki wear not knowing what is in store for them. They have the worst morning of their lives when they wake up to realize that they have unknowingly exchanges their bodies with each other due to the magical power hidden in the rings. While Alby finds it impossible t lead a life of a girl Janaki strives hard to cope with the uncouth lifestyle of a young man.  It is explained that the ring actually was used by a king almost 100 years ago to ensure victory against his rival in a war. The movie deals with the halabaloo and chaos caused by this unprecedented change of gender.

Though the plot is not exceptional and has a foreseeable ending the treatment of the plot is something refreshing.  Unlike some fantasy movies which present a complicated series of events this movie has a simple plot with humour as the predominant factor. The tensed atmosphere caused by gender exchange provides audience with some good moments of laughter barring some gender related jokes which is slightly indecent and prejudiced.

The director Binus S makes a brilliant use of Kochi slang to produce some comedy sequences without making it look objectionable. But on the whole, the comic elements in the movie are good enough to keep the audience engaged and lively.  Anushree deserves a special mention for portraying the transformation from a simple innocent young girl to a disorganized young man convincingly. Shine Tom Chacko also fares well in his character without overdoing his facial expressions for dialogues.  Balu who plays another integral role is pure fun to watch with his perfect comedy timing and excellent dialogue rendering. Joy Mathew, Nobi, Sunil Sukhada and Binoy do justice to their characters even though they have relatively small roles to play.

The climax seems to be too predictable to amaze anyone. It could have better if the climax as endowed with a twist or surprise and the editing needs improvement. However, considering this is the first film by Binu S he has done a commendable job. The film gets a pass for the brilliant humour throughout the movie.